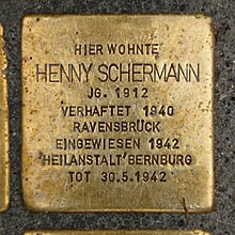 Henny Schermann visited lesbian bars in Frankfurt before being arrested and interned in Ravensbrück.

Lesbians and the Third Reich

In a number of ways, Germany has come to terms with its Nazi past. But there are still things that require further unfolding, and research into the treatment of lesbians under the Third Reich is one.

Before telling our stories, we should not forget the dreadful dislocations brought about by the ghastly “Kaiser’s war” (1914–1918). But out of the ashes rose a flowering of queer life unlike any before, fermenting during the doomed Weimar Republic (1918–1933).

In pre-World War I Germany, there were strong movements for women’s and queer rights. After the war, these picked back up and intensified.

And Girlkultur was internationally known. Foreign women joined the German Neue Frau (New Woman), clustered in Berlin particularly. Women found each other readily, as opposed to the clandestine, shame-inducing ways of the past. You could go to a newsstand and purchase the magazines Frauenliebe (Women’s Love) or Die Freundin (The Girlfriend), with advertisements for, say, the 13 lesbian clubs in a 16-block section of the Schöneberg neighborhood, and all that existed beyond that.

There were even international guidebooks written about ‘Berlins lesbische Frauen’ (Berlin’s Lesbian Women).

But this all skidded to a halt when the Nazis began their heavy crackdown, beginning in March of 1933. But since the war’s end in 1945, the bulk of research into Nazi queer oppression has concerned the pink triangles: the men.

The historians with access to primary materials and financial backing have provided incredible data streams, yet the claims don’t agree. Figures of those arrested, and of those killed, drift from 5,000 to 10,000 to 200,000 and even 500,000 men swept up into the Nazi maw.

But women were thought to have been persecuted under their own triangles, i.e., a Jewish woman wore yellow, red for communists, purple for Jehovah Witnesses … and black for the Asoziale (Asocials) — which marked you for a wide range of things, including vagrancy and prostitution.

For decades now, lesbian historians like Laurie Marhoefer have been toiling in the fields to identify lesbian historical figures impacted by the Third Reich.

According to Wikiwand, Marhoefer has “developed the concept of intersectionality as a characteristic of Nazi persecution practice, e.g. in the biography of the Würzburg resistance fighter Ilse Totzke, targeted by the Gestapo for a variety of reasons: because she maintained contact with Jews and tried to help three women flee to Switzerland, because she was suspected of spying for France, and because she was ‘not normal’ and was denounced as a ‘man hater.'”

In July 1940, Agnes Spindler was caught in men’s clothing selling fruit without a license. Detective Secretary Erlemann forwarded the case directly to the homosexual department of the Secret State Police with the note: ‘Even if other people were not upset by this, it cannot be denied that it is a transvestite who wears men’s clothing for immoral motives.’

Elli Smula was a Berlin tram conductor arrested in September 1940. She was accused of compromising Berlin Transport (BVG) by missing work after going out drinking with fellow (female) workers.

Like her colleague Margarete Rosenberg, she was detained by the Gestapo. The following November both women were transferred to Ravensbrück, where Elli “suddenly died” on July 8, 1943.. Margarete, listed as a lesbian, managed to survive until the Americans liberated the camp.

And then there was poor Henny Schermann, who visited lesbian bars in Frankfurt before being arrested and interned in Ravensbrück. Henny was sent to the Bernburg Euthanasia Centre, which specialized in the elimination of ‘asocial’ elements from society. She was murdered in May 1942 at age 30.

While Henny was forced to wear the gold of a Jew, she was “eligible” for the black. While we will never know how many Jewish lesbians were exterminated, tallies of “Asocials” and the information on them coming to light now warrant the recent placement of a controversial memorial sphere at Ravensbrück.

Enter Krawalllesben (riot lesbians). Their resolute insistence on this ball eventually meant that on October 11, 2018, a tear-inducing dedication ceremony set the ball into place, reading, in German: “In memory of all lesbian women and girls in the Ravensbrück and Uckermark women’s concentration camps. Lesbian women were considered ‘degenerate’ and persecuted and murdered as ‘asocial,’ as resistant and crazy and for other reasons. You are not forgotten!”