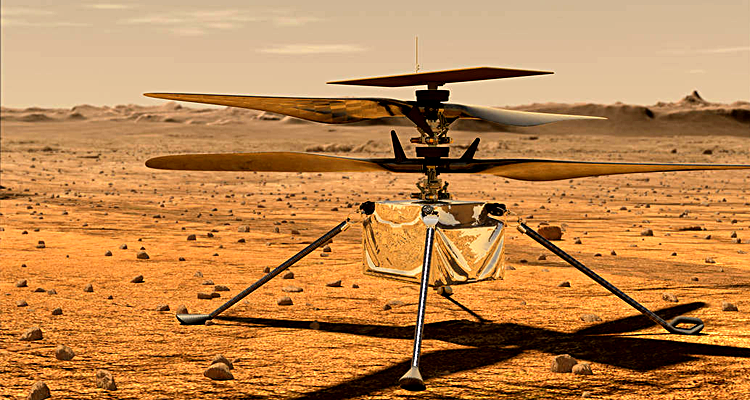 Funny how things you share a last name with seem to garner your attention. I knew a colleague with the last name Danzig who had albums by that band hung in his cubicle. I used to have posters of Carter the Great in my home, and wished the movie John Carter had done better for the same reason. I actually enjoyed that movie, not only because of his name, but because it took place on Mars. If you never saw it, Carter could jump higher and run faster than on his home planet. He also had incredible strength. Those abilities were because of the gravity there, which is only one-fifth as strong as Earth’s.

The Martian atmosphere is still bringing about wonder, because NASA just sent a helicopter, called Ingenuity, on its latest mission to the Red Planet. It’s currently undergoing test flights, and as of the writing of this article the latest flight got as high as 16 feet and traveled 872 feet at a speed of around 8 mph. It’s amazing for many reasons, the most important being the aforementioned atmosphere of Mars. Getting lift and flight from a helicopter there is the stuff of miracles for our ancestors. Currently the United States, United Arab Emirates and Japan have probes on Mars. Our mission was the only one to include a drone.

I’ve written about my fascination with space before. Ever since I can remember, I have always gobbled up what knowledge I could about the universe we know so far and I have a keen awareness that there is far more we’ll never know. One of the first movies I remember was Disney’s “The Black Hole,” which followed a harrowing mission to the then only theorized about object. We have now moved beyond discovering black holes and are theorizing about dark matter.

Currently hanging in my home is an engineer’s layout of the space shuttle. I remember being in elementary school when Columbia first launched. It was a special day, not only because a television was brought into the classroom for us to watch it on, but also that my hometown’s name was Columbia. I fell in love with the program and even had the privilege of seeing a launch in person. I have been glued to a computer during Red Bull’s space jump, SpaceX launches, and lately the Mars missions. Ironic that someone who isn’t a fan of heights loves the idea of touching the universe so much.

Approaching Mother’s Day, I was recently asked to describe what it was like being a mother. I responded by saying Mr. Carter is the evolution of me. Hopefully he will take the best of me with him, discarding the worst, and take those characteristics further than I ever could. That includes knowledge of our world. A mother’s love means he will likely get to see a person land on Mars, and I am happy for that opportunity that I will never know. But that’s the beauty of loving something at times more than yourself, and why he’s my favorite thing I get to share a last name with.