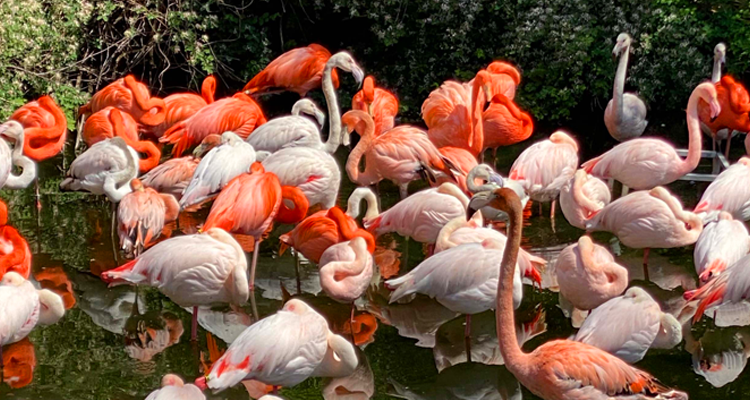 On Flamingos and Aging

Before dementia, there are flamingos and nosiness.

Long before clinical dementia overtakes the brain, aging has mental effects that change us. There’s the inevitable effect of watching the past repeat itself both personally and culturally. There’s also the effect by which anything eccentric about you in earlier life becomes intensified. When two such effects come into alignment, you’re in trouble.

For example, there are pink flamingos and the disposition of the author of this column (AKA the nosy bitch). I’ll illustrate. True story, I’m afraid.

I was driving through Morningside and passed a house landscaped with crepe myrtles, beds of flowers, and a lawn of pure green that had never been perturbed by a weed. However, the lawn was also home to a pair of plastic pink flamingos on silver-colored legs. I had been noticing the campy bird’s return everywhere and, as someone who once owned over 200 images of it, I’d been wondering why.

I parked in front of the house and knocked on the door. A teenager opened it and frowned. “Hello,” I said, “Are your parents here?”

“My mom’s in the kitchen. Can I tell her what you want?”

“It’s nothing important. I just want to ask her a few questions about the flamingos.”

“The flamingos?” the boy repeated. I nod.

He looked a bit weirded out, but that’s okay. Soon, his mother was at the door with a dish towel in her hands. “Hello,” she said. “Rodney says you are selling flamingos. I’m not really interested …”

I laughed. “No, no. I’m seeing them all over the place and I wondered what possessed you to give these two a home.”

“Oh,” she said, stepping forward and looking over my shoulder. “Are you with someone? Is there someone I should call?” Rodney steps outside and crosses his arms.

I explained that I have a history of collecting flamingo images that goes back to the mid-’70s when they were a goofy cultural icon of Floridian fantasy. Around 1982 I sold my collection — mainly souvenir statuettes dating back to the ’50s — to a store that was opening with the name Pink Flamingos. I tell her that people kept giving me flamingos. In fact, I had recently boxed up a bunch, planning to get rid of them. Then, I started noticing them in Dollar Stores, on websites that sell collectibles, and in people’s yards.

“So, again,” I said, “I’m just curious to know what about them attracted you? Does it have something to do with the infamous movie, Pink Flamingos?

The impossible occurred. “Excuse me?” she said. “It sounds familiar, but I just bought them because I thought they were a hoot. I mean, I know they’re retro …”

“Yeah,” I said. “Even in 1979 when I was collecting them, they were retro but campy. In fact, that year I wrote the Christmas cover story for the AJC’s Sunday Magazine about the beauty of bad taste, and it was illustrated with my kitsch collection, including an abalone-shell lamp featuring a palm tree, a flamingo, and Jesus on the cross. I said it turned Christianity’s pivotal tragedy into an accident in the Everglades.”

I laughed. She didn’t.

“That same year, I lived in a beautiful apartment building on Saint Charles. One of my neighbors was Mickey Day, a hilarious drag queen, who was larger than Divine, the drag queen in Pink Flamingos. Mickey decorated the courtyard with flamingos like these. The neighbors objected and kept hurling them on the roof. That’s one thing about these. Some people have no sense of humor and really hate them.”

Rodney was now squatting in the grass, appearing interested. “At the same time,” I said, fully wound up, “other people think this shit is fine art and take it seriously. It wasn’t long after I wrote that story that I met this hot guy who lived in a mobile home — just like Divine in Pink Flamingos. One day, I came across a vintage toy trailer home park and a pair of tiny flamingos. I set it all up on my bed. He asks me, ‘What’s this about?’ I told him something like, ‘Well, I’m giving you this, so no matter how high you climb in life, you won’t forget that your roots are in a trailer park.’ He got furious and asked me if I thought he should be ashamed of his mobile home. Then he called me an asshole and left. I never saw him again.”

Rodney and his mother looked weary. “So,” Rodney asked, “these birds are gay, right?”

“Oh, hell yeah,” I said. He laughed. She smiled. They thanked me for the “history lesson” and went inside. I got in my car and made a call when someone knocked on the window. It was Rodney with flamingos in his arms: “Mom says you can have these. She doesn’t want them anymore.”