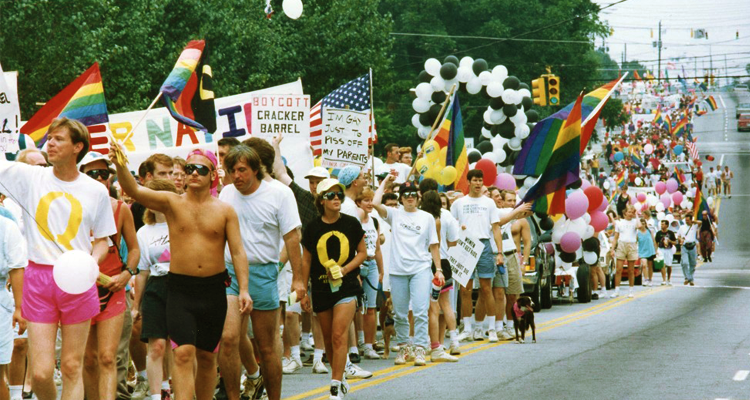 Once Upon a Time in Georgia and Atlanta Pride

On May 11, 1966, the Atlanta Constitution headlined “Clear Out Piedmont Park Perverts, Grady PTA Urges.” Some of us reveled in being called perverts. Some of us joked, calling it “Needle Panic in Piedmont Park,” as the cops cleared out drug sellers and users along with men meeting men. Some of us embraced being outlaws.

Six weeks after the Stonewall riot on June 28, 1969, Atlanta’s finest (affectionately called “the pigs” by some folks) instigated another raid, this time on the Ansley Mall Mini Cinema on August 5, 1969. Our ally, theater owner George Ellis, brazenly (and lucratively) showcased Andy Warhol’s film, “Lonesome Cowboys,” a Romeo and Juliet knockoff set in the Old West, where cowboys strip down and furtively fall in love.

Back east at Ansley, house lights blasted, camera bulbs flashed, IDs were demanded, and moviegoers were badgered (so much for the Fourth Amendment). “Does your husband know where you are?” our current community leader Abby Drue (CEO of the Ben Marion Institute for Social Justice) was challenged. The question and the assumption went unanswered.

Our LGBTQ response was not to burrow back into the closet. Inspired by Stonewall cultivating gay liberation fronts cropping up all over the country, activists here created the Georgia Gay Liberation Front, and at the behest of community organizer Bill Smith, called it the GGLF to embrace the entire state, Deep South and Bible Belt be damned.

My friend and mentor Berl Boykin (April 7, 1944–October 6, 2018) already knew about payback. As a sophomore at Emory University in 1963, he was given 24 hours to get off campus when he was caught with another man in his dorm room.

“Didn’t that deter you from ever going back to Emory again?” I marveled, and Berl chortled, “No, not at all!” He and his best buddy, Emory student body president, Steve Abbott, dreamed of a gay rights group on campus and gay liberation worldwide, and that was that. Even when Steve burned his draft card on the Emory quad to protest the Vietnam war, he didn’t get expelled.

Although married and with a baby girl, Steve mostly loved men, bisexual before it was common. His daughter Alysia pays homage to him in her 2013 memoir, “Fairyland,” which has been optioned by Oscar-winning director Sofia Coppola to be made into a movie (Steve died from complications of AIDS in 1992). Other bisexual folks were pivotal too, among them GGLF co-chair Judy Lambert, in tandem with her husband Phil.

Steve and Berl found the only friendly media in town, the alternative newspaper The Great Speckled Bird, and rotated on and off the Bird staff, which had a musical-chairs policy to keep any one writer from becoming entrenched.

Also an artist, Steve crafted a front page cartoon for the Bird on June 28,1971, touting Atlanta and Georgia’s first Gay Pride March. “Gay sisters and brothers are oppressed in Atlanta too,” Steve editorialized. “By the churches (‘unnatural creature!’), by the government, by almost everyone (‘no jobs for queers’). Thus, in Atlanta, as all over the country, gays were marching again. We call for a repeal of anti-gay laws and for an end to job discrimination. An injustice to one is an injustice to all.”

For our fabled city too busy to hate, Gay Pride was daunting. Atlanta refused a permit for the march, and so the 125 protesters “marched” on the sidewalks and stopped for every traffic light. As Grand Marshal Berl loved contradicting the Atlanta Journal Constitution report of 50 folks: “There were 125, I know, I counted them twice!”

Our natural allies on the left often didn’t know what to make of us. The GGLF appealed to the Georgia chapter of the ACLU to obtain a permit and were soundly thrashed. “No, we won’t help you, you are not a minority!” Berl quoted them. Even when we marched together, as Atlanta gay writer and actor Steve Warren did for the 1963 March on Washington, we were undercover, despite gay man Bayard Rustin orchestrating the 1963 march.

Again, Berl laughed about the spectacle, but mourned that Klaus Smith then quit the GGLF. In October of 1972, Klaus and his roommate Robert Lyons, best known as drag performer British Sterling, were killed in a home invasion. Having the chutzpah to confront your state’s highest authority lives on.

In 2004, Berl and I camped out at the Carter Center lobby until a staff member would meet us. Earlier that year, Georgia amended its state constitution to outlaw same-sex civil unions, and now as a world human rights champion, we asked if President Carter would endorse same-sex civil unions. Wonder of wonders, this time we succeeded, and Carter confirmed so in December 2004.

As they say, it is good to share your strength, your hope, and your experience for the benefit of others. Hope springs eternal.

Appreciation goes to Martin Padgett for his new book, “A Night At The Sweet Gum Head: Drag, Drugs, Disco, and Atlanta’s Gay Revolution” for invaluable research.