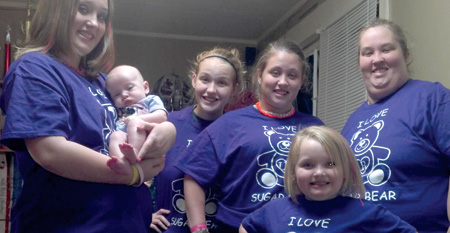 “Being gay in the South, people don’t like it. Why? You have homophobes who want to beat you and bully you and name-call you … I am wearing purple today to let every youngster and teen know that is OK to be who you are. Don’t let nobody change that.”

Melissa Carter’s ‘That’s What She Said’

The Georgia Voice Editors
OutspokenThat's What She Said
October 18, 2012 0

Make mid-life your beginning, not an end

Melissa Carter: Make mid-life your beginning, not an end

The Georgia Voice Editors
OutspokenThat's What She Said
October 12, 2012 0

Seems now that I am 42 I should be having a mid-life crisis. At least that’s what I keep hearing.

Those younger than me oddly keep using the term “your generation” around me and I have even heard more than one menopause joke directed my way. It’s not worth explaining that the “Change” won’t come for me for another decade.

When I left the Bert Show last year, some even accused me of doing so because of some age crisis. So I decided to look up exactly what a mid-life crisis was on Wikipedia, in order to understand how to play my part, and found it is “a time where adults come to realize their own mortality and how much time is left in their life.”

About seven years ago, I went to Ireland for a summer, where I travelled the rolling green hills masquerading as a Canadian tourist. The assumed identity was necessary because George Bush was still president. Upon hearing my American accent, locals would accost me and demand answers regarding Dubya’s foreign policies and general incompetence.

For a while, I tried to defend myself and my country against their tirades, but then I discovered the Canada solution. Everybody likes Canada — good old genial, non-threatening Canada.  It’s like the Ellen Degeneres of nations.

I’ve never actually been to Canada, so I didn’t know anything about my declared country of origin, which wasn’t a problem because nobody else knows anything about Canada either.

The Georgia Voice Editors
OutspokenThat's What She Said
September 28, 2012 0

I know a lesbian couple who recently broke up. They decided to inform their friends of their news by sending out a joint mass email. The email was short but let us all know that they had, sadly, decided to go their separate ways after seven long years.

Shortly after receiving the email, I was called by one of our mutual straight friends and asked for a translation. What exactly was she supposed to do now? Reply to the email? Send an email to both women separately? Send a pie or bottle of Jack Daniels? Should she call one of them or both of them? So I became the lesbian Rosetta Stone in an effort to help our straight friend understand.

I have heard of this type of email a few times before, and always from a gay couple.

I was bombarded with Facebook messages and emails. Everyone sent me the same couple of links. An organization in Chicago claimed Chick-fil-A had seen the light of reason and kindness, and intended to change their ways. “Yaaay,” said my friends and colleagues. “Just wait,” I replied.

Turns out the policy in question was merely a reminder to Chick-fil-A employees (and the country) that the company treats all of their customers equally. I have never doubted that Chick-fil-A is willing to take my gay money. My problem is that they then use my gay money to fight against my gay rights. This practice remains unchanged.

I understand people love their damn waffle fries, but I’m gonna need y’all to let this company go. You just can’t fix some folks, and interacting with them will only frustrate you and embolden them. I will give you an example.

“For that kid with a jersey hanging on his wall, if their favorite player comes out and says it’s OK to be gay, that will mean so much to that kid.”

Melissa Carter: Love (not sex) at the DNC

The Georgia Voice Editors
OutspokenThat's What She Said
September 14, 2012 0

My friend had the opportunity to attend the Democratic National Convention in Charlotte earlier this month, and I asked her to be my guest columnist and give some insight into what impacted her about the trip. These are her words: What has the Democratic Party done for us that we have never been able to do for ourselves?

During the three days of the Democratic National Convention in Charlotte, nearly every major speech openly celebrated love, no matter whether that love comes in the form of two guys, two girls or a guy and a girl.

One after another, speakers walked up to the podium and found a way to remind gay voters that they are loved, accepted and needed by the Democratic Party.

The office park where I spend my days is across the street from the Feminist Women’s Health Clinic, or as the protestors standing in our parking lot call it, “Abortionland.”

They’re usually there on Wednesdays and Fridays, so if you’re planning on getting a pap smear or somethin’ over there, you might want to schedule around those days.

The loudest is a woman caring a sign which reads, “I REGRET MY ABORTION.” I call her “Irma” for short. I have learned so much about Irma’s personal narrative on walks to and from my car.

Let me assure you: She really, really regrets her abortion. She thinks about it every day of her life. The child she did not have would be 37 by now. Mathematically, that means she has been screaming about her regret since Gerald Ford was in the Oval Office.

The Georgia Voice Editors
OutspokenThat's What She Said
August 31, 2012 0

My home office is dedicated to space. The walls are covered with images of the space shuttle, former astronauts, and science fiction characters of a future some hope to experience.

But as NASA excitedly gives updates on the movements of the Curiosity Rover on Mars, I can’t help but wonder if Neil Armstrong and Sally Ride would be equally impressed with the space agency’s remote controls.

We lost these national heroes within about a month of one another, and I doubt they envisioned that at the time of their death America’s vast exploration of space would rely solely on a robot.