Last week, we posted a number of photo galleries from Atlanta Pride weekend and one reader was critical of the fact that we included a couple of photos of the anti-LGBT protesters that were stationed at the intersection of 10th and Peachtree during Sunday’s parade. The reader’s comment on Facebook sparked a nice dialogue on the issue.

We’ve all seen these protesters at Pride before. They’re always a small group who posts themselves at the most visible spot on the route that they can find. They were also out at the Trans March on Saturday, awaiting the marchers as the event ended at the 14th Street gate.

The Pansy Patrol is usually out there as well with them, doing their best to shield the hateful messages being displayed on the various signs. Some bystanders engage them. Most ignore them or look at them with curiosity, pity or sadness.

We at Georgia Voice experience a similar dilemma every year that we take very seriously, although ours raises the question of whether we’re doing the protesters a favor. To document and publish photos or stories about them or not? That was the reader’s criticism, that an LGBT publication shouldn’t do so because it just gives them publicity and the satisfaction.

We take a slightly different stance on that.

At the end of the day, our job as journalists is to document what happens at any event — the good, the bad and the ugly. Including these pictures shows both what the LGBT community is still up against, and also (maybe even more importantly) the brave individuals who combat that kind of hate peacefully and, many have said, effectively. We have to acknowledge the hate that is still out there so that those that think this community’s fight is basically done will know that that is far from the case.

But there’s also a question of degree. How much coverage should be devoted to them?

We included about 5 to 10 pictures in our parade galleries, which contained around 600 images total. We also included photos of the protesters at the Trans March, but those also showed the Pansy Patrol as well as the pro-LGBT signs of support from a number of people scattered around the same area. And we did a Facebook Live of that scene, showing the small number of protesters being drowned out by the loud music, singing and cheers from others as the Trans March wound its way to the finish.

We feel that the small number of pictures of the protesters in 1000+ pictures in our numerous Atlanta Pride galleries this year accurately reflected their role in the weekend overall.

But one of those photos stood out. 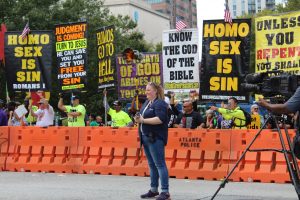 It was a picture of Atlanta Pride Executive Director Jamie Fergerson standing in front of a wall of protesters during the parade. The hateful signs seem to envelope her, but Fergerson isn’t facing them. She’s facing south, keeping an eye on the floats as they approach, and she’s got the slightest hint of a smile on her face.

That’s the kind of picture that says so much about where we are, what we’re up against (although most don’t do us the favor of being upfront about their feelings about us) and the resolve it will take to overcome it.

What do you think? Should we keep including them in our coverage at the degree to which we’re doing or not?