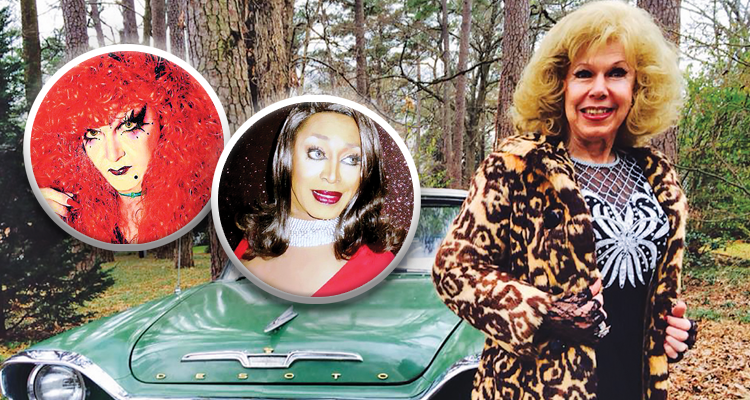 Nothing makes an old gay person more annoyed than death. We have better reason to resent it than straight people because we endured the plague of AIDS. Back then, every single friend died and — long estranged from my family — I felt completely alone, floating in the night sky as I often imagined myself as a child. “Is it grief or is it depression?” a therapist asked me. I explained that it was “inevitability.” He prescribed an antidepressant for my inevitability, and it worked long enough that I could stop thinking full time about the inevitable.

In the last few weeks, we as a community have faced two deaths — drag performers Tina Devore and Lily White. They were preceded by Diamond Lil six years ago. It’s become a cliché to say so, but drag queens don’t simply entertain us. Historically, they have pushed us into self-approval.

I’ve often called Lily White a shaman. After a pathetic five-year marriage when I was 20, I started my coming-out process with the self-loathing whose only antidote was finding sex in bars. I’ve told the story countless times, but it was seeing Lily White perform at the Locker Room that woke me up. She and her two fellow Grease Sisters, in punk-rock/goth drag, performed the Flying Lizards’ version of Summertime Blues. Lily literally reversed my dread. Being gay was going to be a fantastic journey, an explosion of difference rather than a struggle to hide within a costume of normality that never fit me. This message is explicitly articulated today by RuPaul and her acolytes, but in the late ’70s it was still radical among queers.

Around 1980, I was under contract to the AJC’s Sunday Magazine and my editor agreed to let me write the paper’s first article ever on drag queens. I wanted to introduce people to Lily’s profound message. I spent a week hanging out with her. She let me try out the coffin in which she slept in an apartment whose walls were covered with patent-leather handbags. She and two other drag queens came to the AJC to be photographed. Then, the new stupid editor of the overall newspaper flew into a rage and threatened to fire the magazine editor if she published the story. I had to make the decision to save my editor by withdrawing the article. Lily wasn’t happy, to say the least, but not surprised.

I edited several publications in Atlanta and wrote three weekly columns for many years. Diamond Lil used to chase me down to share her schedule or give me recordings to review. She was rare in that she sang as well as lip-synced. We met up a few times and she unfurled her life story, whose message was really the same as Lily’s, though set in an earlier, campier time. About a year before her death, I began to see her regularly at the Death Café Atlanta, a monthly get-together at Oakland Cemetery to discuss the way death’s inevitability can positively inform our lives. Lil was always out of drag, using his name Phil, and always sitting quietly at a table alone. I always joined him or dragged him to another table. While the café’s purpose was not really a support group for the terminally ill, it of course helped him make meaning of what was left of his life, even though he never shared his cancer diagnosis. We joked that the thought of death’s inevitability made us both quieter than we’d ever been.

I only interacted with Tina Devore once. During my Ph.D. studies I was invited to speak at a conference on queer spirituality at the University of California. My subject was the Gospel Girls. I went to a performance to check it out for filming and met Tina, who, like Lil, often used her own voice. When I told her my name, Cliff, she stared at me in silence for a moment and said, “That’s my name too. I’ve never met a white boy named Cliff.” I told her that was my experience too, and we had a lengthy chat about color and names, segregation in the queer world, and, of course, gospel music as theater. She was obviously brilliant. I ended up scrapping the project for reasons too dramatic to recount, but the memory came back bigtime when I watched the recording of Tina’s funeral in Florida on the internet. Although I didn’t hear the words “drag queen,” the stories shared by high school friends, family members, and some Atlantans who traveled there demonstrated how being joyously queer no longer means necessary estrangement.

These three amazing people, shamans who preceded today’s mainstream drag, changed my life in moments. There are times I wish I’d followed more conventional paths, but their gift to me was fascination. As we celebrate Pride, let’s vow to honor and apply the lessons of their lives to what is left of our own.