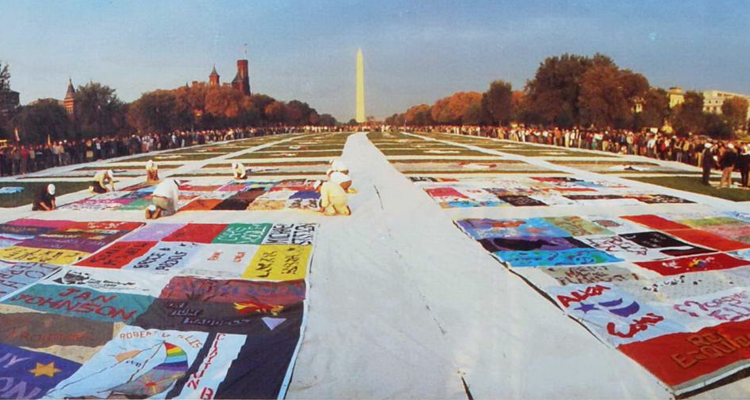 It’s after the 1987 March for Lesbian and Gay Rights, and all the queers have gone home.

About a week after the march, I have dinner with my supportive-but-very-conservative parents at Murphy’s. My father likes the wine list, and Madre loves the desserts. I am in accord with both of them.
They ask how it all was, meaning ‘some outstanding color, where you stayed, what you ate, that sort of thing.’
“Well, it felt incredible. Just the energy from all those people! They say 500,000 people viewed the AIDS Quilt on the National Mall. I have my press pass, so I climbed the overlook tower: as far as the eye could see, the panels just went on and on. I cried. My girlfriend took the photos. It was beautiful and it was heartbreaking.”
I shake myself. “Uh, I think it was more like 300k at the March. We filed past the White House — and you know RayGun has done nothing for this emergency.” I put up my hand. I do not want to hear any swirled shit about “the mother fucking President,” as Whoopi Goldberg called him. Whoopi pushed a brother in a wheelchair the whole length of the march, which seemed to have no end. But there was a lot of high- and low- minded stuff in between.
Poor Alan Schindler’s mother carried a color 8×10 framed picture of her murdered son. I was one of many who ran up and hugged her and told her how sorry we were for her loss.
I don’t mention this.
“You know, we stayed in Charlottesville …” Madre claps her hands and, wide-eyed, asks, “Did you go to Monticello?” We are garden sluts, loving to tour wherever we can.
“Well of course. Why would we stay there otherwise? We were at this great bed and breakfast in an 18th century house, with afternoon cookies and open bar, and hand-baked muffins in the morning.”
“We spent an entire afternoon at Monticello. I brought you a plant chart.”
“Great!”
I say nothing about a house built on slavery nor the fathering of enslaved children and on and on. This isn’t the moment for a history lesson.
“And it was crazy getting arrested …”
Forks are thrown down, sour expressions appear, and Madre grits her teeth as she says, “Oooh, why did you tell us? We didn’t want to know!”
“Well Madre …”
“No!”
Well, shit.
“Okay. I will say that we went to an Italian restaurant run by Neapolitans. We thought we’d been transported to the Bay of Naples. Linda’s Italian, she said it was as good as anything she ever had in Italy.”
My mother, who is Italian American and grew up with Amalfians and Bay of Naples people, had a tear in her eye as I described a cannoli with a flawless shell and just-out-of-the-cow ricotta, making a believer out of you.
But really, I was thinking about the civil disobedience. We’d had a full morning of training and were assigned to affinity groups. Groups needed names, mine was “Shameless Hussies.” One young lady was an ACT-UP activist in New York, another a lesbian mother from the Midwest, the third from Vermont, the fourth a student at Amherst. Crazy —  I happen to attend Boston’s Pride parade in 1988, one among 30,000 other marchers, and an attractive young lady approaches me, pointing her finger, asking, “Wasn’t I arrested with you?” Great come-on line. “Yes ma’am.”
But yes, it was serious. We massed at the base of the court steps and spread out into the shadows. As the first civil disobeyers were dragged out, hands zip-tied behind their backs, some cops placed white gloves over their hands. Ooh, people got pissed. Chants of ‘’Your gloves don’t match your shoes!’’ started up.
A police captain circulated through the arresting pas de deux masses, quietly but forcefully saying, “Keep your opinions  to yourselves.”
I mentally return to the dinner. “Well, we were placed in buses. And I contributed my C note to the D.C. system. It was either that or serve 60 days.” Madre’s eyes widen considerably, and my father asks, “Do you need any money?”
“Naw, I’m good. Oh — my girlfriend and some of our Atlanta comrades greeted me when I was released, and we all walked over to Chinatown for dinner. It was close, and the food was great.”
There is considerable eye rolling. But I’m used to it.
Good dinner though. Like that hummingbird cake. Madre always says, “I can feel it going right to my hips.” But she never turns it down. Me neither.