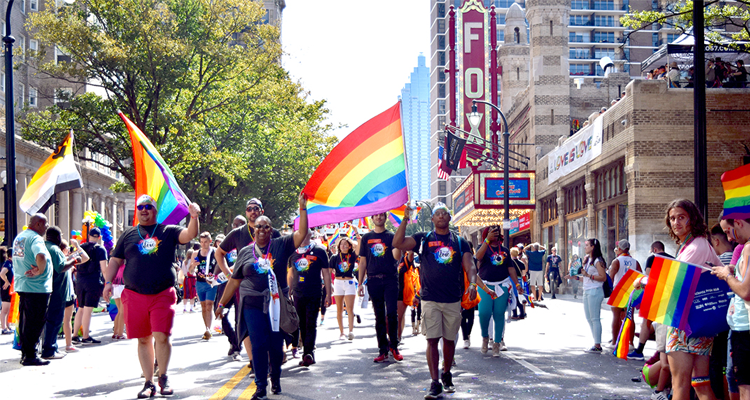 Somehow, I have nearly always found myself in the wrong place at the wrong time for Pride. But the year before I left home for college, I finally got a chance to march in the parade.

I first attended Atlanta Pride not all that long ago in 2015, though the half decade between then and now has brought unimaginable differences. Then, I would have mistaken our present for a dystopian fiction. Now, I can’t help but see our present haunting the past. In any case, I wasn’t long out of my second closet, and my first Pride was also my first experience being myself in public.

Transitioning, at its start, holds a certain terror, particularly in contemplating one’s changed role in the world. It is a position somewhat between images of self, which is made tenuous for all that our society abhors ambiguity. It is a time for which one is often made to feel a problem for not appearing within a binary. In the dysphoria I experienced then, and the fear I had of discrimination, I overvalued “passing” as a goal, even as I was beginning to see its desirability as an imposition of a hetero/cisnormative society. I had not yet experienced myself as a person among a class of people, and would not truly, until, in college, I lived in an experimental, more or less exclusively transgender housing situation. In community, we gain the perspective to shift our sense of normalcy, which we cannot do alone, even when the idea is beginning to be present. My first Atlanta Pride would be a preview for me of what community would mean.

At the time, I was out as trans at home — more or less — but not to most friends. I had certainly never appeared as myself in public. I was afraid to appear as a trans woman en route to the parade and decided to change my clothes only after arriving. Finding a public bathroom was a pain, and I had to wait in line at a Subway too overwhelmed with restroom users to demand we all buy something first. The experience was simultaneously tedious and terrifying. It gave me time to contemplate my fear of how people would react to me. In the end, however, my anxiety was hardly justified. It was Pride, after all.

The (now sadly defunct) Gay-Straight Alliance of my high school was to meet me as the parade was forming, where I had arranged for us to march with Georgia Equality. My peers never quite materialized where I expected them. I would later find them after the parade. While they were elsewhere, a member of Georgia Equality helpfully taught me how to properly apply lipstick using a method I still rely on to this day. In fact, I think I still have that very container of lipstick.

The march was an exhilarating experience of being swept along by oneself and by others. It was a beautiful sea of capital-Q Queer people, and in the joy of the crowd one could lose their overwrought sense of self-consciousness. The fear of coming out I had before that moment was erased. How could anyone not enjoy being out in such company? It was life affirming to be marching surrounded by such proudly gay people.

I didn’t happen to notice that my cheap sandals were inadequate for marching, nor did I notice the Georgia heat and humidity. We were all having too good of a time.

In reaction against our Queer joy, members of the Westboro Baptist “Church” were camped out at the final bend of the parade route. The photographer ahead of us asked that we slow down so he could get a shot of our contingent against the backdrop of the WBC, but we desired to get past them. It was not that they were threatening, but that they were annoying.

I didn’t fear the WBC back then, and I don’t now. Their inarticulate howling contains something less than the substance of speech. Attention was what they sought, as it sustained them and made their senseless hate appear as if it had meaning.

We marched on, and in the perspective of the distance we gained, it was clear that the sea of us made a pitiably small island out of them. The conflict would soon be forgotten.

In light of the pandemic, I can’t help but feel a certain nostalgia for the joy of crowds at a time when the fear of COVID-19 didn’t qualify the experience. We were together, physically, as a community, and in being so, we reversed the notion of what it means to be normal.