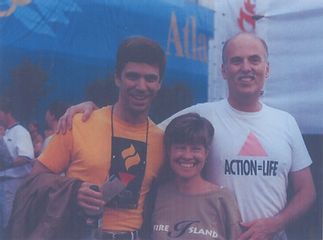 “I’m homosexual and I feel very bad about it!” I blurted into the pay phone outside my dorm.

“Why do you feel bad about it?” retorted Frank Kameny, head of the Washington, D.C. Mattachine Society, D.C.’s only (at the time) LGBTQ rights group. For a rare moment (as anyone who knows me would know), I was speechless. I don’t have to feel bad. I thought I had to feel remorse, guilt, shame — you name it. Frank Kameny became my burning bush leading me to revelation.

Except for confiding in a few friends, I burrowed into the closet until I was a sophomore at George Washington University. Upon failing to seduce one of my fraternity brothers one sunny afternoon, I became desperate. Sad and mad, I called the Mattachine Society, and Frank Kameny told me where the gay bars were.

If you’ve never heard of Frank Kameny and the Mattachine Society, one of the first LGBTQ rights groups in America, well, that’s the point. Fired by the government in 1957 for being gay, Frank appealed all the way to the Supreme Court, which refused to hear his case in 1961. To paraphrase “As You Like It,” the toad, ugly and venomous, can hold a sacred jewel. Frank’s defeat led him to found the D.C. Mattachine Society and launch annual pickets of the White House and Independence Hall in Philadelphia until Pride took over in 1970.

So, not only did Frank become my gay bar directory, he also inspired me. In 1970, I worked alongside him in the Washington, D.C. Gay Liberation Front, and I campaigned for him when he became the first openly gay man to run for Congress in 1971. When handing out fliers and spying one of my classmates and his girlfriend at Eastern Market, I hid in the bushes, but came back out when they were gone. Run sheep run, and live to fight another day: a most excellent strategy.

Frank came to the D.C. GLF and harangued everyone about the protests and lobbying we needed to be doing. Dutifully we listened to our elder statesman, and then went out to dine and cruise men. Even in the bar Frank hammered away (how did he ever have a boyfriend, I wondered).

I resolved I would be an activist and be social, picketing the Lost and Found bar on Capitol Hill for its quadruple carding policies for women and people of color one week, and drinking and dancing there the next. I’m not proud of that. But I took a stand and then was equally determined to have a life. A friend once said, “Dave, you have imbecilic determination,” and that’s how to be an activist and take care of yourself.

What’s absent for us now in our community is a beloved community which the civil rights movement embodies, all in this together, all for one and one for all. Representative Shirley Chisholm, the first Black woman elected to Congress, once chided the Black community with the line, “They’re like crabs in a barrel, crawling all over each other so nobody gets to the top.” So while the vision can fall short, at least there is a vision, and eyes on the prize.

The key to my journey is the consciousness-raising cell groups we hosted in D.C and in the Georgia Gay Liberation Front in the ’70s. Following Queer Theory, we called out racism, sexism, ageism, and looksism, to look into people as well as at them. We created ourselves and our camaraderie, so we had a personal base to organize our political liberation. Too often now there is just organizing. Hey, we’re all bozos on this bus, and we need to see each other as human. We have to find a way to get in the way in our own groups, and that is sad.

The specter of social injustice in the wide world and in our ranks makes me sad, and in the fulfillment of social justice I rejoice and celebrate with my brothers and sisters.

I recall when Bernice Reagon of the ensemble “Sweet Honey in the Rock” came to town and bemoaned what we could accomplish “if we all didn’t hate each other so much.” I take that inventory to heart. What does the gay faith healer say? Get over it!

For more information on Touching Up Our Roots and their virtual Gay Bar Tour, visit touchingupourroots.org.