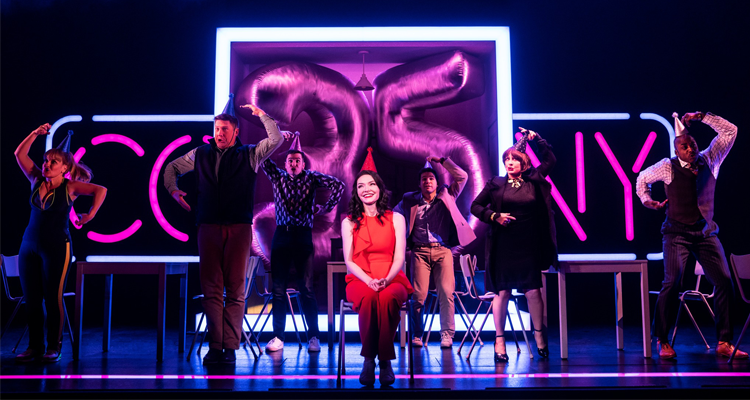 The theater industry has been and still is majority dominated and run by cisgender, heterosexual white men. I saw the recent production of “Company” on Broadway, and I thought it was a stunning revival of one of Sondheim’s greatest shows. The original plot of “Company” follows Bobby Company, a single man living in New York City. His friends are all married or engaged, and the show follows his relationship to marriage in a series of small vignettes with friends and lovers, linked together by his 35th birthday party.

The director, Marianne Elliott, chose to deviate from traditional gender/sexuality casting of the characters of Bobby and Jamie. To cast “Bobbie” as a female identifying person as opposed to the traditional male casting adds additional layers to the story when Bobbie is asked why she isn’t yet married with kids.

The casting of Matt Doyle in the role of Jamie is significant, because it provides queer representation both on and offstage. Jamie is typically cast as a cisgender, heterosexual woman getting married to the character of Paul, but this iteration of the character is a gay man.

While Doyle’s rendition of “Not Getting Married Today” is entertaining and heartbreaking all at once, I couldn’t help but think about the literal price to see queer representation on Broadway. Inexpensive tickets to this show were hard to come by. This is in part due to the brilliance of Elliott’s directing, the presence and unforgettable performance of Patti LuPone (when I saw the show, her rendition of “Ladies Who Lunch” earned her a two-minute standing ovation), as well as the five Tony wins that the revival brought home this past season. This brings me to the discussion of the accessibility of theater and queer art.

In order for theater to be more inclusive, we must be willing to discuss the accessibility of art. This starts with the redistribution of wealth into our education, specifically art education. Bringing art into every community, especially underfunded communities, is crucial if we are to be inclusive in theater. Accessibility within the theater industry is more than just the funding of the arts and arts education. Ticket prices and location are a huge factor that I believe is often overlooked when discussing accessibility to live art performances.

When “Hamilton” was released on Disney+ in July of 2020, I was astounded by how many people outside the theater industry were watching the show. Imagine the audience that could have been reached had “Company” been filmed professionally and released for public consumption. Filming and releasing shows on major streaming platforms allows so many people to see shows that might not have had the ability before, due to ticket and travel prices. For those who can’t travel to New York City to see a show, seeing the tour is the next best thing. But what happens if you don’t live in an area where tours are coming through? And even then, ticket prices for tours are increasing as well.

The wealth gap is still a major factor when it comes to the ability to see shows, as well as the ability of performers to receive training and then go on to audition for them. Unfortunately, the cost of auditioning, equipment, studio rentals, and travel expenses can all be major roadblocks when it comes to making this industry accessible for all who want to be a part of it. I don’t know what the overall solution is, but I know it’s a discussion worth having, because representation is always worth fighting for.

Raised in the queer community, Emma O’Loughlin is a performing artist and recent graduate of Boston Conservatory at Berklee, where she received a degree in musical theater.