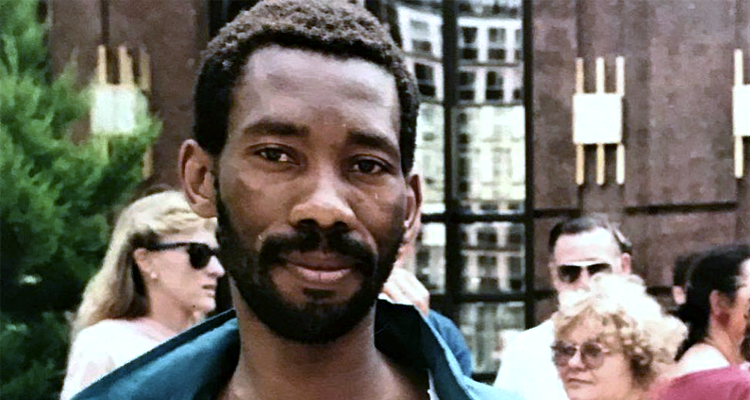 Born in the township of Soweto in South Africa, Simon’s life was immediately circumscribed by the poisonous system of government segregation called apartheid, in place from 1948 to 1994. “Apartheid” literally means “apart,” and it enshrined a life of rabid policing to protect the properties, persons and rights of whites [called “Europeans” in South Africa], and a hostile and aggressive fist that pushed Black people [called “Africans”] into slum townships or untenable “homelands” where life suffered ever-increasing economic unsustainability.

Simon was shipped off early on to live with his grandparents, who lived as tenants on a white man’s farm.

Because of the pass laws, which literally governed where a Black person could and could not tread, there were times when Simon’s mother secretly fled to her parents to see him. Simon’s first memories were of hiding her from police or “enforcers.”

Simon was forced to perform backbreaking agricultural work and was beaten by the farm’s white owner if his work was not deemed “adequate.” Simon quickly understood that education was his best hope for a better life, and he walked long distances to attend school after chores.

His grandparents meant to keep him there, but Simon fled back to Soweto, where he reunited with his mother. There, a tentatively coming out teenage Simon wished to meet “decent” people, and the only way was via pen pal. Simon’s pal, who became his boyfriend, turned out to be white.

Black Africans regarded queerness as a European disease: unnatural, infecting people, and ruinous to the tribe. Whites believed queerness was an infectious African disease, a further reason for apartness.

When the families discovered the relationship, they were each horrified across the lines of sexuality and race. In addition to receiving severe beatings, Simon was taken to ministers, a priest, a traditional tribal healing man, and lastly, a therapist. The secretly gay therapist advised Simon and his partner to live together, as a European man and his African manservant.

This is how they lived for years. Meanwhile, Simon received some education, and began anti-apartheid protest work. In 1983, he fearlessly joined the vastly white and male Gay Association of South Africa. He saw his position as a recorder with GASA as part of his increasing involvement with anti-apartheid work. But discouraged by their racism, he formed the Saturday Group, the first Black gay group in Africa.

In 1984, he was an organizer for the United Dedicated Front, a self-described nonviolent group that worked for empowerment in the townships and against official racism.

In June and then September, the Soweto townships erupted over tightening of apartheid regulations and especially enforcement of untenable rent increases. After days of violent confrontations which left over 60 people dead and tens of thousands of rand in destruction (in 1984, 100 rand equaled roughly $100 in U.S. dollars), Simon was scooped up as #13 of 22 defendants who during a four-year-long trial came to be known as the Delmas 22.

Charged with murder and high treason, the defendants faced execution. At the start of the trial, the judge slammed the 22. Before any evidence was even given, the presiding judge declared that “by forming a revolutionary climate against the state” their purportedly peaceful nature was “false [because] no group … could commit high treason without violence.”

Fast forward to the 2018 opening of the Simon Nkoli Exhibition at the University of Stellenbosch, the same Stellenbosch characterized as “the last bastion of apartheid” and where a building named after Simon now sits.

At the exhibition’s opening, white Justice Edwin Cameron related what he saw as one of the most decisive moments in South Africa’s history:

• Simon comes out to his fellow arrestees — and they reject him. “We don’t want you touching the food we get … We exclude you from our roster. Just stay away … you should be tried separately.”

• Simon rises in angry protest. “I may lose my life for being a dedicated anti-apartheid activist! I am also a poor, black, gay man from a township — I am oppressed in all these respects. I am gay and I will not allow you to reject me.”

• After long nights of struggle, Simon finally taught them no one should be discriminated against. The group decided to stand trial together.

• “Terror” Lekota, one of the 22, would later state “[How] could we say that men and women like Simon, who had put their shoulders to the wheel to end Apartheid, should now be discriminated against?”

Cameron declared that Simon’s loving defiance proved a pivotal moment, one of those that undergirded an amazing creation: South Africa’s Constitution. It became the first country on this planet to recognize “sexual orientation” as a class requiring protection from discrimination.

Back to the trial: when the Delmas 22 were finally released on a technicality, Simon went into high gear. A condition of his release was that he meet with no more than three people at a time. Ha! A then 17-year- old (now Dr.) Beverley Palesa Ditsie showed up and emerged as a co-organizer with Simon of the Gay and Lesbian Organisation of the Witswatersand (GLOW).

Ditsie later recounted, “Simon greeted me with ‘Oh hello. I’ve never met a Lesbian before.’ We laughed … [W]hen I met [him], I was happy. I was home. His vision and courage … were always there. And I just blossomed. There were meetings, rallies and parties all the time.”

GLOW’s mission was the creation of safe spaces, with a mandate to openly foster nonsexist, nonracist and nonhomophobic places for queers around Johannesburg. GLOW grew chapters across the city.

In 1990, Simon and Ditsie, plus GLOW and various others, worked tirelessly to organize the continent’s first Pride march. For the very first time, the streets of Johannesburg were filled with crowds of marchers lustily chanting, “We’re here, we’re queer, we’re everywhere.”

Simon gave a powerful speech, connecting the anti-apartheid struggle with the struggle for queer rights, and blasting the simultaneous oppressions:

I am Black and I am Gay. I cannot separate the two parts into secondary and primary struggles. In South Africa I am oppressed because I am a Black man, and I am oppressed because I am gay. So, when I fight for my freedom, I must fight against both oppressors. All those who believe in a democratic South Africa must fight against all oppression, all intolerance, all injustice. With this march, gays and lesbians are entering the struggle for a democratic South Africa where everybody has equal rights and everyone is protected by law.”

Sadly, Simon contracted AIDS, but continued his activism. After coming out as one of the first publicly HIV-positive tribal African gay men in 1990, he initiated the Positive African Men group, working to create awareness of the disease and safer sex practices.

With talk about the new constitution filling the air in 1994, Simon anticipated the need for more visible queer growth, so he helped found the National Coalition for Gay and Lesbian Equality. This group connected progressive organizations throughout South Africa. NCGLE was explicitly racially mixed, with Black leadership.

Drafting a new constitution was one of the first goals of the new government. As apartheid was being legally dismantled, Simon met with then-President Nelson Mandela to discuss ensuring protection from discrimination for queer people and the removal of the sodomy law.

After the constitution struggle and the inclusion of queer protections, Simon fought like a barnstormer for sodomy law repeal. And he condemned the country’s admittedly strapped health care system in which, without personal money, he had no access to medicine that could lengthen his life.

In 1998, after living with HIV-related illnesses for 12 years, he died at age 41. But not before he saw the end of apartheid; the new constitution; a health care system beginning to deal with AIDS; the creation and empowerment of a visible, vocal and inclusive queer rights movement; and the repeal of the sodomy law — the latter just days before his death.

Among his international recognitions, Simon came to Atlanta in September of 1987 when the city named a day for him. There was a Simon Nkoli Day in San Francisco, where he’d been a Pride marshal. He also received the Stonewall Award at the Royal Albert Hall in London.

He opened the Gay Games in New York during Stonewall 25 and he was made a “Freeman of the City” by Mayor David Dinkins. In the old English system, the Freeman of the City is an honor bestowed by a municipality upon a valued member of the community, or upon a visiting celebrity or dignitary.