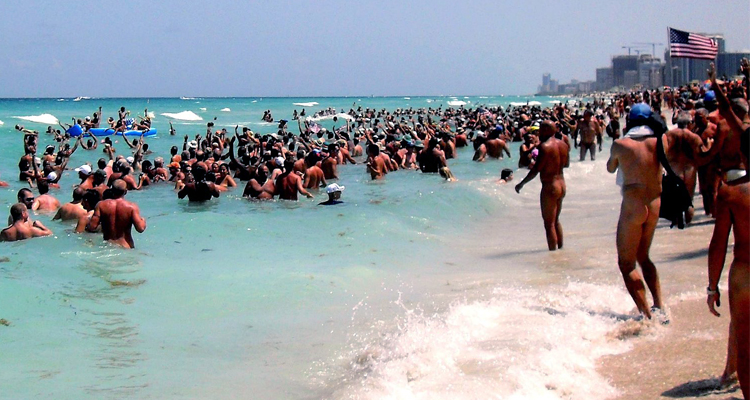 Bare-Naked with No One to Fuck

I was having second thoughts about the accommodations I made for a trip to Miami when my friend reassured, “How bad could an American hostel be?” The answer, I’ve learned, is not awful until you want to have some out-of-town sex.

This was my first time traveling for a marathon, and I limited how much I spent for the trip since it was more an extended weekend than a vacation. I flew into Fort Lauderdale for a third of the cost of landing directly in Miami, and rented a hostel bed from AirBnB instead of booking a hotel room.

“Was this home used as a hostel before AirBnB existed, or did you all convert once that came along?” I asked the innkeeper while we were on the backyard patio overlooking Miami’s Wynwood neighborhood.

“This used be crack house,” he replied in amused, abridged English. He began to wave his hand to signal the past, and said, “This area, bad.”

Suddenly the venue’s décor (and shoddy plumping) made sense. Nothing blurs the line between griminess and charm like gentrification.

The biggest risk in my hostel experiment was possibly sharing a space with folks brimming with the rowdiness a trip to Miami deserves. Thankfully all three of my roommates were in town for the marathon as well, so after a nearby Grindr quicker it was lights-out in our dorm at nine o’clock on Saturday night.

The early bedtime didn’t help as we all missed our goal times on the sweltering course. I won’t bore you with a breakdown of my disappointing run, except to never underestimate how powerful a stranger’s affirmation – “You got this!” or “Way to work!” – can be to someone who is struggling.

My roommates were pleasant, but by Sunday afternoon the bunk-bed ambiance triggered latent anxiety of being cock-blocked in my college dorm. It began to feel blasphemous to take a mostly platonic trip to South Beach, and my lone regret from the hostel was not having privacy for when certain urges or app chimes inevitably pinged.

“Sorry, can’t host” is a phrase I’ve rarely typed since I was 24 years old. The most promising escape from the carnal cabin fever overtaking me was Haulover Park, Miami’s “clothing-optional” beach where either I would find a guy to sync libido cycles, or the nudity on display would drain all desire from my genitalia.

Unsurprisingly, most of the bodies at Haulover Park were not the type that sexually stimulate me. I’d guess more than a hundred people were at the beach, but wasn’t able to get an accurate count because I worried the wrong gaze would make people think I was a pervert – or worse, a tourist.

So I laid on the sand and pretended like getting my taint tickled by an ocean breeze was part of my daily routine. There were about a half-dozen guys who I would’ve like to have done more traditional nude activities with, but I was strangely uncertain about how to initiate an encounter.

My fluency in the codes and protocols of sex in parks or public restrooms didn’t translate to when everybody was already naked. Is that guy adjusting his balls as an invitation, or just to ensure a full-body tan?

A light drizzle prompted me to leave the beach before finding any playmates, which might’ve been a bigger washout than my marathon setback. Fortunately, Miami had a couple more strangers shouting affirmations like, “Keep pushing!”