You may never know me as a radio personality, but others will constantly tell you of what I used to do for a living, how my job is the way your other mother and I met and how I shared your miraculous arrival into this world on air. However, the successful career I have enjoyed most of my life is losing its momentum and I wanted to be the one to explain to you why.

While walking down the hallway after my resignation, a woman came to hug me in support and whispered, “solidarity,” in my ear to convey her disappointment at the decision for me to be taken off air months before my contract was complete. Despite an internal joke of how like Katniss from “The Hunger Games” I suddenly felt at her comment, it made me realize how afraid women are of fighting what isn’t right for them. She whispered it rather than saying it aloud, afraid someone might punish her too, like she felt I was being punished.

No more whispers, son. My contract is finally up and I am sharing this letter to you with everyone, since many have no idea what I have been doing since my unexpected last show.

There is a classic story called, “Man Without a Country,” and lately I have been a woman without a station. Since I was taken off air five months ago, my responsibilities consisted of whatever extra work I could take off someone else’s plate, regardless of what station within Cox Media Group it involved. After being asked to clean out my space in the B98.5 morning show office, I had no permanent space and no permanent task. I simply checked in every morning at 9 to learn what was needed for the day and parked my personal items in whatever vacant studio or desk was available. That lasted from March until August. 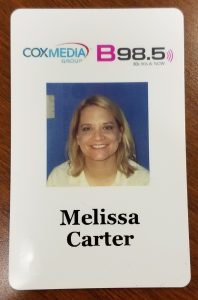 It was my decision to be in that place, since I am the one who let the company know I was not going to renew my contract that ended this past weekend. However, it was my program director’s decision to immediately yank me from the airwaves at the end of February without any explanation to listeners. From that moment on, my colleagues were incredibly gracious in teaching me new skills and I completed each task asked of me wholeheartedly. Those included grabbing news audio, contacting listeners to alert them that their concert tickets had come in, recording commercials that only months before had garnered me extra income in the form of endorsements and hunting down client mentions from on-air shifts that at times required me to listen to the very show I had just been pulled from.

Was it awkward? Maybe for a minute. The most graceless experience came when a new CEO was named to the overall company during this time, and he and several corporate representatives came by our office for a tour one day. In a room where employees from several stations were gathered to greet them, I was the only one not introduced by the managers. Never, ever be that rude to anyone, son, regardless of how competitive you need to be.

Was I embarrassed being off air but still in the office? Most certainly not. I took control of my career, whether that career on Atlanta airwaves is over for good or not. And, most importantly, I am not afraid of my future.

I have been amused by the amount of people who have asked me if I am OK during this time. Radio has weathered so many of us after layoffs, company buyouts and that ever-threatening advanced age in a world filled with alters to youth and beauty. These colleagues past and present have continuously checked on me, and I love them for it, but it’s almost as if I have had to reassure them I really am fine. Their subsequent stares usually indicate a belief I’m in denial, so I end the exchange with hug of thanks for their support.

How could I be described by so many over the years as a role model, yet continue to have my name on a show I am not proud of? Or that name listed second, twice, behind men who were unfamiliar with this city? Never wanting to give up and still attempting to fix the situation, I even brought in a well-known woman I used to serve on a morning show with for a meeting about being my second co-host. Management never called her back or even entertained the idea of a two-woman morning show. Yet, they replaced me with a man and formed a two-man morning show. That woman went on to be hired by the competition.

I take responsibility for allowing such an opportunity as having my own show turn into nothing special. Once I saw no chance for improvement with me there, I walked away with my head held high and a collection of new wisdom to carry me forward.

If this seems melodramatic about a job, it’s because I never considered radio a job. Those of us who have sacrificed for this profession since we were in high school describe it as “being in your blood.” That is because it is our connection with an audience that is the driving force behind the lack of sleep, lack of pay, lack of personal weekends and even demise of personal relationships like mine and your mother’s. Human connection, whether through a laugh or a cry, is what keeps this changing industry afloat and us on the boat. I am proud of the time I have logged and look forward to answering your questions about those years someday.

I have dedicated much of my adult life to speaking up about things I thought needed to be heard, and that is why you’ll find people’s reactions to me very polarized. They either love your Mom or feel very negative reactions upon hearing me. But as long as I have one to use, my voice will speak on behalf of those who are afraid to open their mouths, of delightful things that force people into much-needed fits of laughter, or about the sweetest things that remind us of our true nature to be kind. I know I don’t require a microphone to effectively communicate, but I sure will miss using one as my primary tool.

What does my immediate future hold? A few exciting ventures that include hosting an upcoming national online show called She Persisted on the Progressive Voices network, a course I created called Speak Your Spirit that helps anyone with a fear of speaking in public, serving as a keynote speaker at the Spirit of Women National Conference in October and the honor of riding on the Donate Life float during January’s Rose Bowl Parade, thanks to Piedmont Healthcare.

What lesson can I pass along to you after all this? Care for your authentic self and take actions that reflect that commitment. Even the hikers on Mt. Everest can’t take one step of their journey without first making sure base camp is set up. Same is true in your life. If you practice brutal self-honesty when it comes to mind, body and spirit, then everything else will fall into place. Those in terrible shape won’t get a championship. Those who don’t feel love for their partner will dread going home. And those who are in a job they hate will never be successful.

Son, your mother was once a famous radio personality and sometimes really good at her job, even making history as the first morning show host in Atlanta – and one of the few in the country – who was honest about her sexuality on air. There is even a little girl in Ohio named after me, since her aunt was a listener and was inspired to donate her kidney to her brother-in-law after hearing my story. Young Melissa was conceived after his recovery, so I got the incredible honor of her being my namesake.

Funny, the only thing that teenage version of your mother wanted when she first walked into a radio station was to be a celebrity. I’m glad I get to say, despite the odds of being a nobody from a small Southern town, I did it. And so much more. With no regrets.