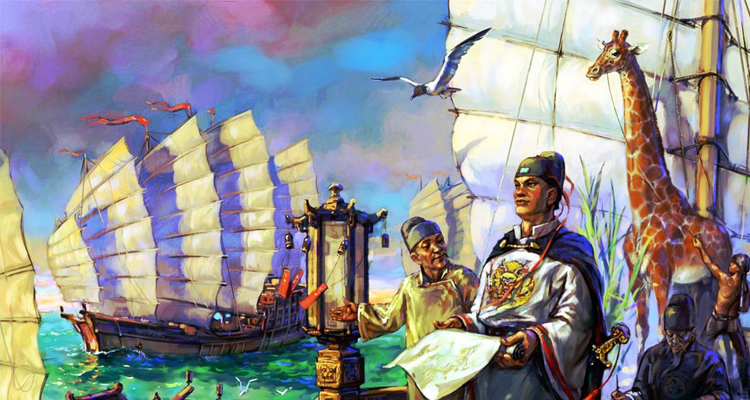 Does testosterone make the man? Certainly not in the case of Ma He, a ten-year-old Hui (Chinese Muslim) boy who lost his genitalia while a war captive circa 1381, as part of his journey to becoming the Admiral Zheng He — a man who sailed a fleet of 317 vessels with 37,000 men to fulfill his emperor’s charge “to proceed all the way to the ends of the earth to collect tribute from the barbarians beyond the seas,” according to Transgenderzone.com.

It was a task the 6′ 5″, massive-chested beardless man executed with great vigor, cunning and diplomatic perseverance, with the largest armada equipped with some of the heftiest ships the world would know until over five centuries later.

His war vessels were multimasted monsters the size of one-and-a-half football fields, made of watertight teak. Tribute ships groaned with offerings brought from the lesser rulers, sometimes even including actual rulers Zheng replaced with puppets installed on their former thrones, as well as emissaries seeking favor at the court of the Yongle Emperor. Dozens of supply ships held all the tools, men and materials needed to maintain the fleet, including caulkers, cartographers, and tung oil appliers. Each ship carried a health officer for every 150 people. And of course the large supply ships, which included those outfitted with walls of tea chests, and even miniature orchards.

The landlocked boy had already exhibited reading and writing skills, and his impertinence when imperial forces took down his resisting city brought him to the attention of the invaders. This eventually led to the Emperor taking an interest in him around 1380, when the man now known as Zheng He showed a great predilection for both military strategy and administration.

At the time of his voyages, China had beaten back Mongol incursions in the north and quieted Muslim restlessness in the west, and the emperor had put down all familial faction rebellions. China was economically self-sufficient and had “barbarians” traversing the Silk Road and some sea routes to obtain the country’s highly desirable silks, spices, and porcelain.

But the emperor wanted more: to demonstrate his soft power, partly via trade, but largely by receiving tribute.

Beginning in July 1405, Admiral Zheng made a series of seven voyages, sailing from Nanjing to Japan and Korea, then down through the South China Sea, fighting and executing pirates, and past Vietnam to Thailand, Java, Sumatra, and Sri Lanka — where he battled Vira Alakesvara of Gampola and brought him back to China.

and finally the eastern coast of Africa, to what are now Somalia and Kenya, as evidenced by the ostriches, giraffes and zebras he brought home. There are claims that he rounded the Cape of Good Hope, made it to the Americas, and even to Australia.

His cartographers created a series of 24 maps that projected from the east coast of China to the north and east, then south through and past all the largely Arab and Indian routes, and even into some Genovese sea routes (the city-state of Genoa must have quaked at the thought of Zheng’s floating war city of 37,000, compared to its entire mostly nonmaritime population of 100,000).

The explorer-diplomat-warrior-admiral was buried at sea in 1433 on his return from Kenya. Three companions published accounts of his travels and his name is widely known today.

His emperor died in 1424, and the successor was a Confucian who wanted quiet harmony in all things, within China’s borders. The Confucian scholars and bureaucracy that came into power with him wanted the money required for exploration to remain at home, and they want to rein in the power of the eunuchs.

Eunuchs came from the many war captives — and those who volunteered their manhood in hopes of achieving favor at court. They numbered about 100,000 individuals and were enmeshed in the running of both the Forbidden City and its administrative empire. They were pro-expansionist, like the preceding emperor.

Traditionalist Confucian court members wanted nothing to do with that world, so a eunuch who changed the balance of power across half the globe was a Confucian nightmare. They literally let the ships rot at dock as they expunged Zheng’s name from the records.