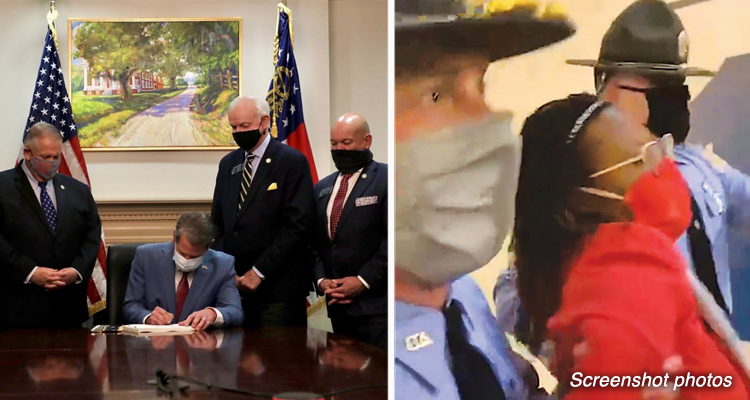 On March 25 at the Georgia State Capitol, I witnessed something America has become infamous for: racial inequality. As I clutched my TV remote until the whites of my knuckles were showing, I was reminded of the anger and disdain that I have felt most of my adult life.

Picture two burly men dragging a small Black woman backward by her underarms while handcuffed. She is not alone; this is the reality of many others who have suffered the same indignation in the name of oppression. I sat watching the arrest of an elected state legislator, Representative Park Cannon.

Representative Cannon was at the Georgia State Capitol all day waiting for a “meeting” that took place behind closed doors in Governor Brian Kemp’s office. A simple knock was given by Representative Cannon prior to her swift arrest by law enforcement. This is definitely deplorable!

The treatment of people of color in Georgia versus how whites are treated can no longer be denied; it is now crystal clear.

In a 13-page incident report, one of the arresting officers noted that “January 6th was in the back of his mind.” I bet it was. Cannon was charged with obstruction of law enforcement and preventing or disrupting a general assembly, although a behind closed doors meeting is not normally considered a “General Assembly.”

A knock on a door was compared to the full-on insurgency of the U.S. Capitol on January 6, which resulted in deaths and over 200 arrests! This single event, while minor in comparison to the aforementioned insurgence, is a palpable indication that Jim Crow is far from dead.

All elected representatives are entitled to the same protection, no matter their race.

We marched for George Floyd, Breonna Taylor, and countless others; the same fervor and outrage should apply when a black woman is dragged out of the Capitol by police. This and many other occurrences are a constant reminder that while my ancestors were brought to this country, the country never welcomed them.

The Governor’s attempt to lock out and lock down Georgia voters with secrecy and intimidation of this magnitude should be seen as unconstitutional, but it’s not! By targeting specific Georgia voters with fewer drop boxes, secrecy, and intimidation, Georgia has proven to its voters that a change must be made in 2022. Why would any intelligent person vote to return to the tactics of the ’50s and ’60s?

Sen. Raphael Warnock said it best: “They are trying to fix something that is not broken. We should be making it easier for people to vote, not harder.”

As big Georgia businesses choose to speak loudly in support of this voter suppression bill, justice must reign in Georgia. Democracy must be granted to all Georgians without restraint. To make an offer of food and water to voters standing in line a prosecutable offense is an affront to the very core of what this country is supposed to stand for. We have come too far to allow these petty attempts to derail our efforts to sustain peace.

Since the Governor’s optics are of such concern, six white men and the Governor posed in front of a portrait of well-known Callaway Plantation. The plantation owned well over 100 enslaved people who cared for 56 acres in Wilkes County, Georgia. I was instantly reminded of the stories my stepfather shared about Jim Crow and Bull Connor. He would say in his husky voice, “Keep the body and take the mind,” explaining how slave master Willie Lynch taught this maxim to other slave owners. It made me sick to my stomach to hear it a second time.

Gov. Kemp called the bill an “Election Reform Measure.” He signed into law a bill that makes it a crime to serve or offer water to desperate voters in the Georgia heat. I can see the late Rep. John Lewis rocking back and forth in disappointment.

As of December 2020, African Americans make up more than 31.3% of the population of Georgia and account for 48% of eligible voters in the state. Not only has Rep. Park Cannon labored to get Georgia voters eligible, but Stacey Abrams with the Fair Fight campaign has broken records registering voters in the now blue Georgia!

“[Kemp] is putting in place advantages for himself and others who look and think like him. Georgia voters aren’t this gullible. They have gone beyond this,” said Rep. James Clyburn (D-SC).

There are so many young Black members of our community to continue this fight against voter suppression and other topics that concern the Georgia voters.

Tobias Jackson-Campbell is a young voter who is gaining traction and is potentially running for a future seat. Among his many other accomplishments, Campbell is the Democratic Party of Georgia African American Caucus’ 4th Vice Chairman. Many of Georgia’s young legislators must be taught to stay engaged and push the narrative that positive young Black voices are just as effective as the ones who “get in trouble, good trouble and necessary trouble,” and are what we need to focus on!

Rep. Cannon and those fighting for our inclusion and equality remind me of why we must remain vigilant in keeping Georgia “Democratically Blue.” We have repeatedly witnessed the results of the alternative, and cannot go backward.