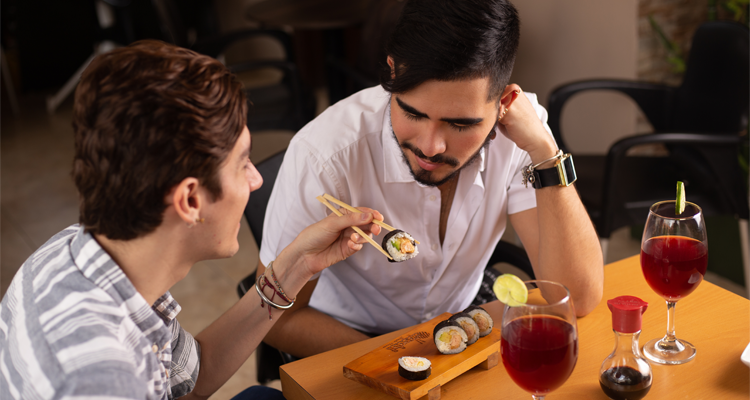 Tips for Eating Out from a Former Food “Critic”

I’ve written a restaurant dining column for Creative Loafing, “Grazing,” for more than 30 years. For most of that time, it was weekly and required me to eat out five days a week. I did not start writing it because I particularly wanted to; I was editor of the paper and the initial writer left after three years. I couldn’t find a replacement who could sustain the weekly schedule, so I took it over.

I refused to call myself a critic, and we always had someone else on staff to take that official role. My goal was mainly to write humor and commentary against the backdrop of eating out. I broke all the official rules of dining criticism. Despite that, I got branded a critic, received many job offers that mystified me, and eventually became pretty sick of the whole business. Nonetheless, I did learn a few things I can share.

First, your company is as important as the food on your plate. The holiday season is a clear example of that. Dining with your family and friends is more important than whether the turkey led a life of luxury before mama overcooked it. When I began writing, the AIDS epidemic was still raging. Most of my friends died, and my social life turned into dinners after funerals with other survivors. Sometimes this was in a fancy restaurant, but it was more often in queer favorites like the Colonnade and the King and I, where the atmosphere was informal and the staffs were supportive.

Second, this ritual of breaking bread is universal worldwide. Most Americans live in a fantasy of exceptionalism in which a president who refers to the rest of the world as “shithole countries” earns fist-pumping from a near majority. My favorite dining has always been along Buford Highway, a huge corridor of constantly changing restaurants serving food from around the world. It has always mystified me how intimidating the WASPs in my life find these largely inexpensive restaurants. Walking through their doors is a transit to another culture and sometimes an occasion for self-examination of our inevitable, culturally embedded prejudice. It’s hard to maintain bigotry when the food on your table is delicious and the hospitable immigrants are anxious to help you with the language barrier and teach you something about the world way outside your door. It’s a cheap way to travel.

Third, you can go ahead and use Yelp to get a vague consensus manipulated by a fucked-up algorithm, but your best bet is Eater Atlanta (atlanta.eater.com). It does an incredibly good job keeping up with the dining landscape. The best real critic in the city is Christiane Lauterbach at Atlanta Magazine. She has, for years, explored the fringes of the city’s international dining. She is equally dependable with the fancier spots, but intolerant of pretensions. Follow her on Twitter (@xianechronicles). Also check out Jennifer Zyman (@jenniferzyman on all platforms) and her podcast, “The Food that Binds” (@FoodThatBinds). Mike Jordan (@mikejordanatl on Instagram) is cool on Thrillist, and What Now Atlanta (whatnowatlanta.com) is on top of openings and closings like nobody else. Bob Townsend at the AJC (ajc.com) writes the best “first looks.” Certainly, the most entertaining video source is Atlanta Eats (atlantaeats.com).

Fourth, stop embarrassing your table by treating servers like crap. This means always tipping at least 20 percent after taxes, even if you are ordering at a counter. The tips typically support the entire staff, all of whom are mostly underpaid. If your meal is slow coming to the table, it’s rarely the server’s fault, so don’t punish them for that either. And, by the way, the server is not your new best friend, so unless they get extra-friendly and you’re okay with it, stick to business. Don’t flirt. Everyone nearby will cringe.

Fifth, stop asking the server what they like on the menu! They may have been told to push a particular dish, especially a special, or they will likely recommend the least adventurous item in order to avoid blame if you hate it. It is okay to ask what is most popular, but that usually means nothing. If your food is served inadequately heated or has some other problem, ask the server to take it back to the kitchen. Don’t make a scene.

Seventh, and I hate to say this, but sometimes you need to be cautious about your health. During the time I was visiting restaurants constantly, it was not unusual to get a “stomach virus.” About twice a year, I got seriously sick. If you’re concerned, you can go online and check health department inspection scores. No restaurant is intentionally filthy, and most that fail inspection instantly do what they need to to improve their score. Years ago, during the annual invasion of Pensacola,I ate at a really grimy oyster shack and, yep, I got hepatitis. It turned out the place had been closed more than once.

Eighth, plan your dining out. The cost of dining out has increased significantly since COVID arrived. The dining scene will likely never be what it was before, when competition kept prices and profit margins low. The solution for many is simply to dine out less often or take advantage of pop-ups, which actually serve some of the city’s most interesting food now. You can find some listed on Eater and Facebook.

Ninth, wear a mask, sit outdoors, or order takeout. Flush the toilet and wash your hands after using the restroom. Smile.