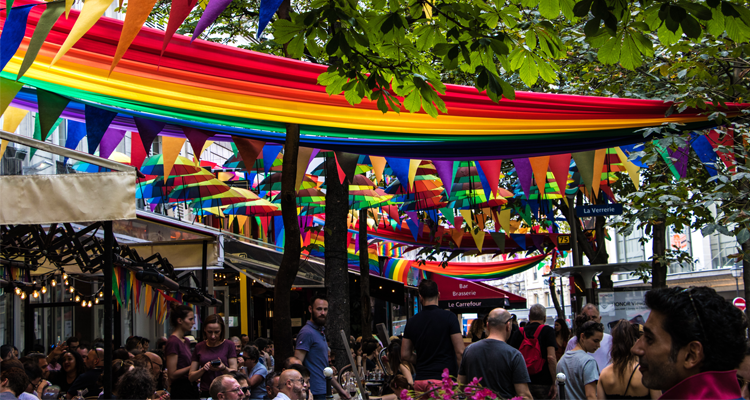 Whenever I used to travel with my gay friends in our youth, the first thing we would do after plopping our bags off at whatever hotel or apartment we had booked for our stay was to look for the local gay business to get the gay guide. No, I’m not talking about an actual flesh and blood “gay guide,” but the glossy magazine that featured a shirtless beefcake on the cover, in which all the local gay bars and businesses advertised for tourists. The information on the inside was written in whatever the native language was as well as “English” (or some broken version of the Queen’s language). “Happy Ours” were sometimes noted with half-priced drinks beginning late in the afternoon, and the grammarian in our group was willing to overlook this charming attempt by the Italian café to promote their cocktails, since the payoff was inevitably a hunky bartender making sure we enjoyed ourselves.

But today we live in a mostly post-gay world. I say “mostly” because there are still places where being gay is such an event, such an abomination to the norms of society, that safe enclaves exist. However, in the vast majority of travel destinations, gays and straights mix freely and there’s little need for a gay neighborhood or gay restaurants and bars. Here in Paris, for example, the traditional gay quarter was the Marais. When we moved here in 2006 there were well over 40 gay bars, with a significant density clustered between the Centre Pompidou and the rue Vieille du Temple. Today I can count the number of gay bars on one hand, and just last month the largest just announced it will be permanently closing following this year’s Gay Pride in June.

Yet there is no reason to despair, because in a post-gay world there is still a way to find where “we” are. The gay guides might be a relic of yesteryear, but a savvy gay traveler will still be able to sniff out where the gay boys hang out. Taking Paris again as my lesson to all y’all, while the gay Marais is fast becoming a footnote in history, the gays do still tend to congregate in and around this neighborhood in the center of the city. Not only is it one of the loveliest, but it is also home to innumerable chic boutiques. So, hint number one, my dears: “Follow the beauty.” It might be a cliché, but gay men flock to beauty: beautiful men, beautiful scenery, beautiful clothing, beautiful Instagram-ready locales. You name it. Going to Milano? Stay and hang out in Brera. Spending a holiday in Los Angeles? It’s going to be West Hollywood, darling. Go ahead, try it.

Ah, but what about smaller, niche destinations such as Key West or Mykonos? These cater to tourists (Mykonos has a permanent population of only about 10,000, but welcomes hundreds of thousands of tourists each summer), and for gay tourists, there are still hotels and beaches which cater to our, um, “particular needs.” While the longest-running gay resort on Key West (the Key House) is still going strong, the Elysium in Mykonos has closed permanently. However, the iconic Jackie O’s has unveiled a massive nude, er I mean new, resort at its eponymous beach on the south side of the island.

While tanning poolside or seaside at a gay beach is wonderful, how does one find where to “hang out” (see what I did there?) for cocktails, dinner, and … later? This brings me to rule two for the gay traveler, which is actually the same as rule one: follow the beauty, girlfriend! If you’re walking in the serpentine labyrinth of Mykonos town, you will find plenty of places that afford prime viewing pleasure. Just remember the key to successful gay tourism is to dress to impress.

Even in nontouristy destinations, there is a very good probability that gays will be found at whatever the coolest address is for the town. Last summer we stayed in The Dalles on the Columbia River in Oregon. It was a super charming small town with gorgeous natural beauty, fantastic wineries to sample, and of course, the best coffee house in town was the local gay hangout (this was Oregon, remember).

So, wherever you go this summer, whether a big city, a small town, or a tourist resort, rest assured there will always be family. We are EVERYWHERE.