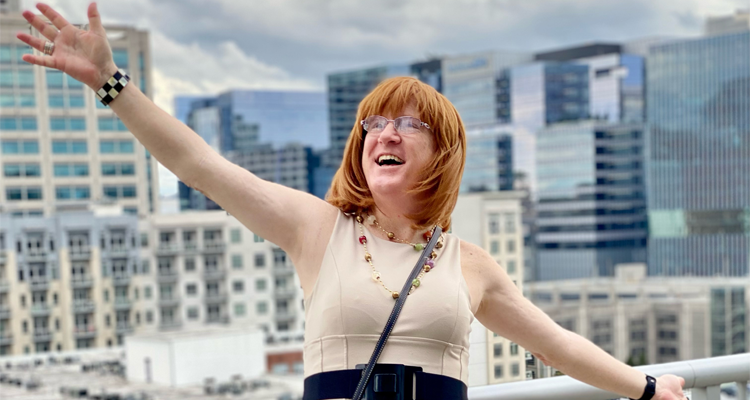 Photo courtesy of the Gayly Dose.

Last month Georgia House Bill 1084 was passed. The legislation creates an athletics committee with the authority to ban transgender youth from playing on sports teams aligning with their gender identity. There are many sides to the subject of transgender youth and whether they should be allowed to participate in school sports teams based on their gender identity versus the sex on their birth certificate.

I am a trans woman, and I am now taking HRT to continue my journey. Some people think what I am doing is a choice, and in a way they are right: I choose to be my authentic self and to live my life to my full potential and joy. I am living my best life so far!

So, to understand this complicated issue better, I’ve taken the liberty of summarizing some of the varying points of view surrounding the discussion, including those of parents of cisgender kids, parents of transgender kids, politicians, schools, and the kids themselves.

Parents of transgender kids just want their children to be happy, healthy, loved and accepted. They have seen how their children have struggled with their identity and how challenging it is for them to be accepted in a society where being different is rarely rewarded, but often suppressed.

Throughout history, politicians have used marginalized people to strike fear into their constituents, and to bring them to the polls and get them reelected. Today, the group used to stir up fear is the transgender community. When I was a kid, there was outrage when a white team of basketball players was scheduled to play against a Black team of basketball players. All the same arguments were made then that are being made today against transgender athletes: They are too big. They are too fast. They are too strong. We cannot compete with them, and we need protection! These arguments have not withstood the test of time.

Schools are in a very tough spot here. They want to do what is right by their children, but they also want to satisfy the parents who are involved in the sports for their children. Public schools are obligated to follow the laws that are set forward.

Cisgender and transgender kids themselves are being manipulated the most. A child will play with another child regardless of who they are, until some parent or other adult tells them they can’t. Children do not want other children to hurt or to be in pain. Sadly, the suicide statistics for transgender kids are alarming.

I would be remiss if I did not share some data. The following is according to The Trevor Project survey conducted in 2021 among nearly 34,000 LGBTQ youth, ages 13–24, living in the U.S. Of those who wanted mental health care, 60 percent responded that they were unable to access resources. Depression and anxiety are on the rise with this group, with 73 percent reporting symptoms of anxiety; 58 percent experiencing depression symptoms; and 21 percent surveyed say they attempted suicide in the past year. Rates of suicide attempts were generally higher among LGBTQ youth of color and particularly high among Indigenous LGBTQ youth.

The founder of The Gayly Dose, Helmut Domagalski, shared a remarkable idea with me on this topic. His concept is that for trans kids to feel included in a team, perhaps trans kids could have their own category of success and be recognized for their achievements in the category of being trans, while still participating in the sport as their correct gender. This would show acceptance of who they are and recognize their achievements without “shorting the others” and without instilling fear in who they are while removing the “unfair advantage” argument all together. They could all play together as children should, even into high school and college.

As people become more familiar with trans people and trans issues, and activists and allies continue to advocate on behalf of transgender youth, we will eventually see a resolution to this issue. One day, hopefully, trans and cis kids playing alongside one another will be common and accepted.

Diane is both cast and crew of The Gayly Dose, an Atlanta-based podcast that elicits vulnerable and honest dialogue about everyday and taboo topics that LGBTQ+ people aren’t having with each other … but should. Diane co-hosts “Hues for Humanity,” a segment with TGD founder Helmut Domagalski. Purposefully candid and brutally honest, the cast speaks on a range of topics, including gender norms, monogamy, body issues, coming out, dating apps, lesbian breakups, and growing up gay in the church. Listen at thegaylydose.com.