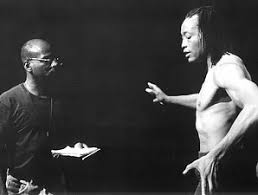 What It Is: Marlon Riggs “Black Is, Black Ain’t” (For Uncle Alfred)

Craig Washington
Outspoken
September 27, 2018
As a child, I was nurtured by a stream of black film and literature that reinforced the pride my elders passed on. But as my queerness, that widening difference between me and other boys grew more evident, those moorings loosened. The elders who raised an eyebrow at the angle of my wrist and the dangle in my hip did not acknowledge James Baldwin as a model to which I might aspire. I had little evidence that who I was and what I was becoming was okay. At the edge of 19, I discovered Baldwin’s “Just Above My Head,” which featured a love story between two black boys like me. It evoked my longing to be loved, and to have that kind of love rendered as a natural thing. There were no such accounts in any film I had seen. The first offering featuring black gay men in unapologetic self-determined fashion was “Tongues Untied.” In 1994, the documentary broke ground by showing black gay men in our fullness exalting each other. It paved the way for the masterpiece that followed.
More than any film before or since its 1995 release, Riggs’ final work “Black Is, Black Ain’t” explored the diversity of black identity positing the black LGBTQ experience as no less black, no less real. Through spoken word, song, dance, and narration, divergent insights about culture are presented. Commentary is provided by some of the brightest artists and intellectuals including Rigg’s friend/collaborator Essex Hemphill, Michelle Wallace, bell hooks, Bill T Jones, and Cornel West. This last work is his most personal. It had the most meaningful impact of any film upon my own vision.
In its opening, Riggs notes that his weight and his T-cell count are the same. Within the first minute, Riggs inserts his struggle with AIDS within the larger exposition on blackness, troubling notions of authenticity and respectability. It is a thread that he stitches throughout the rest of his survey. By going there so soon in the journey, Riggs refuses to reserve the disclosure for some climactic exposé. The timing honors the many who waited too long to tell, those whose lives and deaths were swept under the rug. It is the film’s most subversive aspect in that Riggs places front and center the most stigmatized health condition of its time as embodied by the director himself, without buildup or delay. His soft timber exudes acceptance. I am captured by that voice as he shares how AIDS forced him to consider the purpose of his living. Every time I watch this scene, I am held in awe by his steadiness in the face of real mortality. It is one of the most stunning depictions of black gay men with AIDS on film.
The work Riggs left behind — especially “Black Is, Black Ain’t” — offers distinctive blueprints. He dedicated his tremendous talents to a particular scope of enlightenment. “Black Is Black Ain’t” does not rest at demonstrating black achievement to disprove inferiority. It upends tightly held traditions, calls out routine sexism, and homophobia perpetuated by pastors, Afrocentric activists, and popular artists. It challenges us to examine our cultural dysfunctions and reframe how we regard difference. Riggs insisted on including black queer experience in the conversation he was having with blacks through his medium.
James Baldwin once noted, “It comes as a great shock to see Gary Cooper killing off the Indians, and although you are rooting for Gary Cooper, that the Indians are you.” By the age of 12, I had already been taught that I was the Indian, but until then, I thought I was safe within my Indian village. When I realized that I carried another marker that set me apart from my family, I was shocked to learn that I was the Indian among Indians. The case made by “Black Is, Black Ain’t” exposes the lies and hypocrisies that I swallowed as a boy because I had neither the knowledge nor courage to refute them. I thank Marlon for setting a standard of truth telling and purposeful disclosure for all of us who picked up his weapons.