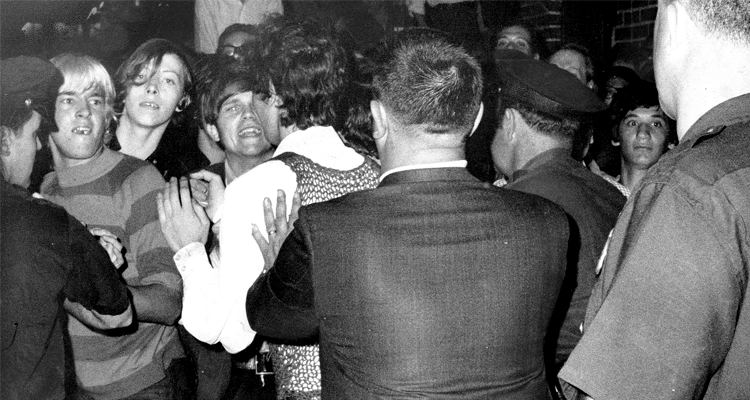 “You’ve been treating us like shit all these years? Uh uh. Now it’s our turn! … [Stonewall] was one of the greatest moments in my life.” —Sylvia Rivera

Karla Jay — a professor emeritus at Pace University, a pioneer lesbian feminist who plotted zaps like the infamous Lavender Menace, an activist who worked in the trenches for decades and who should be a revered queer public intellectual — works at scene setting for “Why Stonewall?” in the documentary, “Stonewall at 50,” available on YouTube.

“It’s hard for people today to imagine how awful our lives were,” Jay says in the documentary. “Whoever was the current mayor would say that he was cleaning up, the prostitution, he was going to get rid of the perverts, and the bars would be raided more frequently. It was illegal for two people of the same sex to dance together, to not wear clothes of your own gender.

“At a raid, if you had a student ID, they would call the school and tell them you had been in the bar,” she continues. “They would call your employer, call your parents — anybody that they could call, they would call. Your landlord. So, without ever having been arrested, you could lose everything. You could lose your apartment, your education, your job, you’d lose everything because you had been in that bar. So, the thought of being arrested in a bar was terrifying to people. And why’d we go there? There was no other place.”

Stonewall had to be in the Village. The Village was an actual neighborhood, where people lived amid a rich history with a swirling panoply of intellectual, political, cultural, and artistic thought and movements, sexual nonconformity, coffee houses (performance spaces), clubs, and theaters. Marcel Duchamp once proclaimed it, “The Independent Republic of Greenwich Village.” Rents were affordable. Permission was widespread.

And that is why the most dispossessed of queers could hang in this warren with the park and the bar.

But why this particular Mafia-run sleazo dive with watered down drinks, filthy toilets, no fire escape, and no running water, so glasses just got fished through a tub and then reused?

Veteran Tommy Lanigan Schmidt was a 17-year-old runaway and came to Stonewall for one reason.

“You could put a few coins in the jukebox and choose a romantic ballad, and for the first time you felt like a human being,” he said, according to “The Gay Revolution — The Story of the Struggle” by Lillian Faderman. “Everyone else could slow dance in their high school, and everywhere else, something I could never do. And that was the first time I saw same-sex dancing … holding on to one other person without the fear that someone is going to bash you over the head is totally centering. So, going to the Stonewall grounded me and the Stonewall riots just brought that feeling out into the real world.”

In the documentary. “Beyond Stonewall.” from the Smithsonian Channel, Stonewall Veteran Mark Segal said, “We were second, third, fourth class citizens. We could hang out here. We could be arrested out on the street. So, this was safe.”

New to New York and to being out, Segal recounted: “Sitting in the bar, all of the sudden the lights kept flickering on and off. I asked, ‘What’s going on?’ [The drag queens] were casual: ‘Oh, just another raid.'”

“That sent off alarm bells in me,” he continued. “But the police had no use for [the white, middle class] me. They’re going after the drag queens, and they’re throwing insults around. Me? They just carded me and let me out. When I got outside, there was a little crowd. And they started applauding when someone came out.”

“Most vocal and loud were the drag queens,” he said. “They had nothing to lose. Everything society could take away from you had already been taken away from them. This was their home.

“Somebody threw something at the door,” Segal continued. “The police barricaded themselves inside the bar. And all hell broke loose. It was one of the greatest nights in history for gay people.”

But not everyone’s riot is the same. Stonewall veteran Miss Major Griffin-Gracy, a Black trans woman, has a rather different take on it.

In a Vice News and HBO-produced video titled, “Pride Doesn’t Mean What You Think It Does For This Stonewall Veteran,” on YouTube, she recounts: “I think of the horrific beatings we took that night on a whim of being set up. It was three nights of total pandemonium. It’s like when somebody throws a grenade. You don’t know where that grenade came from. Or who threw it. All you know is BOOM!”

“The interesting thing about all this is that on top of the devastation, misery and hurt that happened, we got a second dose of it when these gay guys came in and took it away from us,” she said. “What I remember is hearing the [gay men] yelling from their apartment building, “Oh the girls are kicking the cops’ ass.’ That’s when the shit was all about.”

“There were so many ways that this could have been done that were complementary and inclusive of everybody,” she said. “Where’s the respect from my community, who was a part of all this, and major part of all of this? Together we’re a strong force. We’re a tough group of bitches.”

The gay divide was always clear. In an interview on the Stonewall Mother Jones podcast, Warren Allen Smith, 77, said, ”I was in my 40s, and I was a businessman and closeted. So, I stayed in the park across the street watching. I didn’t want to mix with those dregs [who were] always causing problems. [You knew Stonewall] was a bar for the people who were too young, too poor or just too much to get in anywhere else.”

Why that one night in June?

On this particular June night, the hottest night of the year so far, with a giant full moon, and yes, Judy Garland’s wake and the fact that the police had just raided Stonewall on Tuesday and this is Friday, and the pull of all the politics of people throwing off choking chains, with Black Liberation, Women’s Liberation, Puerto Rican Liberation, liberation in Vietnam, protests with tear gas and police and Feds and truncheons and bullets, and the fact that law enforcement had brought in the female undercover cops who did the sex checks (if you were clothed in raiment that appeared to be for the sex other than the one you were apparently born into, the police could “inspect” to make sure that you were not in violation of the law).

According to “Stonewall” by Martin Duberman, Lieutenant Christopher Pine, who led the raid, said, “It was a release of energy, they could now fight back, for all the times that they had to slink away, without being able to say anything to the crap the cops were giving them. Once it broke loose, it was very contagious.”