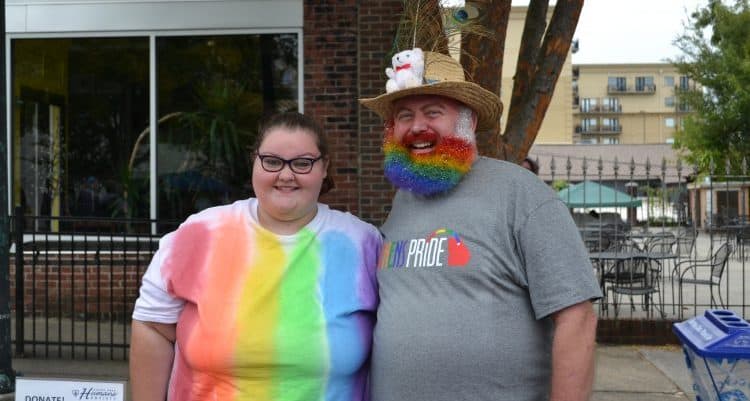 Athens PRIDE has come a long way since its first inception, a potluck picnic hosted in 1998.

This year’s festivities included Rainbow Flow Yoga at M3Yoga, a happy hour at Sister Louisa’s Church bar, an evening of PRIDE Dragaoke hosted by The Pub at Gameday, a social for LGBT youth at Rook and Pawn, the ever-popular Red HOTTTT Dance Party at Little King’s Shuffle Club, the Sunday street festival and “Divas Under the Lights,” the culminating show downtown that featured drag kings and queens and out musicians, including our Best of Atlanta 2017 winners Evah Destruction and J. Tyler.

Despite the cloudy weather and growing winds provided by Hurricane Irma, a number of vendors and advocacy organizations lined Washington Street for the family-friendly festival on Sunday that drew dozens of families, University of Georgia students and faculty, Athens residents and more. In addition to a photo booth, henna art and face painting, LGBT folks and allies heard from vendors including Human Rights Campaign, Athens for Everyone, Democratic Party of Georgia LGBT Caucus, the Feminist Women’s Health Center and The Health Initiative.

Mike Chadwick, the “official” mascot for Athens PRIDE, was on hand as well, his glitter-festooned beard and peacock feather-topped hat drawing just as many requests for selfies as the Athens Humane Society pups.