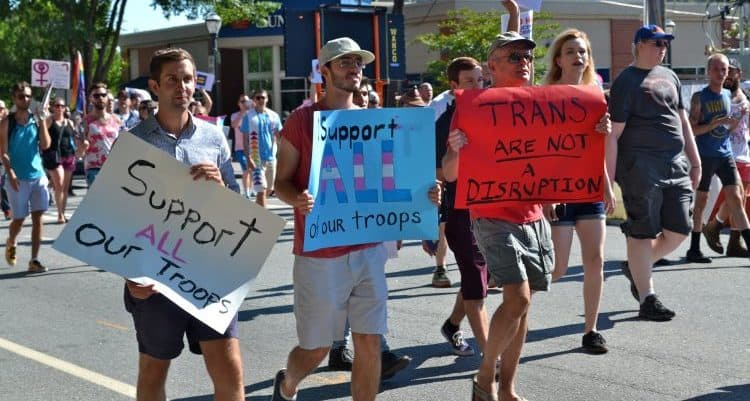 On July 26, President Donald Trump let loose several tweets that effectively barred transgender service members from being in the US armed forces. Many in the LGBT community saw this move as yet another attempt by the president to backpedal on equal rights for the transgender community.

Within 48 hours, Atlanta responded. Organizations put together a rally and protest on behalf of the country’s transgender individuals for Saturday, July 29. Dozens of allies and LGBT community members gathered at TEN that afternoon to make signs, pose in front of a giant transgender pride flag — an international symbol created by Atlantan Monica Helms — and hear from keynote speakers before marching from the rainbow crosswalks in Midtown to Tech Square, where a message of inclusion and unity would be seen by thousands attending the day’s ATL United soccer game at Bobby Dodd Stadium.

Georgia state Rep. Keisha Waites, an out lesbian, spoke alongside local trans activists Tracee McDaniel and Sebastian Beckham Nix. Activist and author Gabrielle Claiborne read a statement provided by Helms, and Jen Slipakoff, who is the parent of a trans daughter, issued some words of wisdom as well. LGBT advocate and former 6th District candidate Jon Ossoff closed the event before Ken Wainwright took to the stage and got attendees fired up for the walk.

Chants of “Trans rights are human rights; human rights are trans rights” and “They fight for you, will you fight for them?” were joined by a cavalcade of honking horns and supporters joining in from the streets of Midtown Atlanta during the march. The march was the official kickoff for what organizer James Brian Yancey, founder of Rainbros., hopes will be a unified effort to benefit and support Atlanta’s transgender community.