Norris, who is president of Atlanta Freedom Bands, said in email tonight that the LBGA practiced long and hard over the weekend in Baltimore — marching 6.3 miles on Saturday and 7.4 miles today.

“We had a dress rehearsal in our full uniforms today, with state flags of all the bands taking part, and the color guard with the dress flags for the parade,” Norris said in the email.

LGBA is playing an arrangement of “Tonight” from the “West Side Story” by Leonard Bernstein in the parade, “celebrating this special occasion with music by a great American composer who was also a member of our community,” Norris said.

“I admit to feeling a few tears watching all these beautiful people who have come from so far to pull all this together,” he said.

“I think of all the personal journeys through discovery, rejection, acceptance and pride to be here today. We feel an enormous sense of pride representing our country’s entire community as the only LGBT-identified group in the parade. We hope that people across the country feel inspired by seeing us and hearing our music,” he added.

The Lesbian and Gay Band Association has representatives from 30 of the 31 bands across the U.S., forming a massed band of 215 people to march in the parade, Norris said. 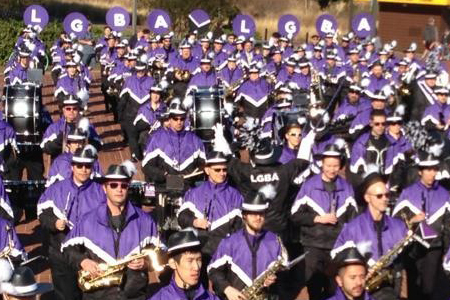 “We learned that LGBA will be the second largest band in the parade, second only to the U.S. Navy Band. There are only 28 bands in the parade, selected from over 2,000 applicants, so being in the parade is such an honor for the organization,” Norris said.

The parade steps off at 2 p.m. LGBA is in the third section of the parade, led by the U.S. Navy. The Georgia State University Band is just ahead of LGBA, Norris said. The networks will carry part of the parade, but CSPAN will carry the full parade.