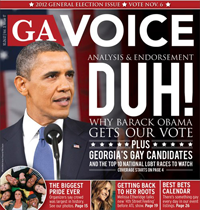 It’s a gray Election Day in Atlanta, but that’s no excuse not to vote. But what should you do after you cast your ballot? Here are 10 ways to pass the time for the rest of the day.

1. Help others vote. Drive a friend or neighbor to the polls, or volunteer to watch their kids at home or their phone at work so they can go. Ask those you know if they have voted and how you can help.

2. Facebook. Join the trend today and post a picture of yourself with your “I’m a Georgia voter” sticker; all the cool kids are doing it. Be sure to post about how easy it was to vote at your precinct (or how worth it if you had to wait in line) to encourage your friends to vote. Then post a few more news links (we suggest this one) or Facebook graphics backing your candidate.

3. Decide where to watch the election results. If you can’t bear to watch alone, plan to join Georgia Equality at the Rush Center, HRC Atlanta at Taco-Mac Lindbergh, or hang out at gay bars like Amsterdam, My Sister’s Room, Blake’s or more that are showing election results. Check out some of your options here.

4. More Facebook. Now that you’ve done your civic Facebook duty by posting about the election, you’re free to distract yourself by following links to election-related fun. Head over to JibJab for the Great American Dance Off to make a video of yourself dancing with your presidential candidate. (then share it, of course!)

Need some options? If you are a political novice, try this  game at DebateDrinking.com which gives you simple key words (like Ohio) to toast.

More of a political junkie? Get more complicated with the self-declared “Official Election Drinking Game” at HyperVocal, which asks you to call states before the polls close and awards points based on the actual results, which then require you to do everything from “make someone drink” to “shotgun a beer.”

6. Even more Facebook. You’ve been serious about the election by posting about voting and silly by playing and posting games. Now you can post pictures of cute kitties, links to YouTube videos of your favorite songs, and comments about how you are NOT talking about the election.

7. Read up on the LGBT races to watch here in Georgia and around the country. As the afternoon winds down, refresh yourself on the races you need to watch out for tonight. Check out the five openly gay candidates for Georgia General Assembly and the top 10 national LGBT races to watch, ranging from lesbian Tammy Baldwin running for U.S. Senate to four ballot measures on gay marriage.

8. Get back on Facebook. It’s almost time. Whether you are at home or at a watch party, sign in from your computer, tablet or smartphone to join the online conversation as results roll in. Be sure to check in our page for updates throughout the night.

9. Watch the results. What else can we say? We’re as nervous as you are. Remember those drinking games? We might be too anxious to actually play.

As another GA Voice reader noted, “Wednesday will come the next day, then Thursday…and the sun will rise and set…” No matter who wins, the fight for our full equality will continued. Rest up.