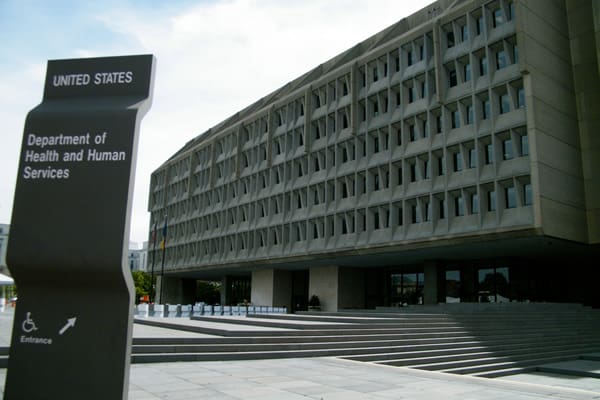 Under fire for a reported anti-trans plan that would eliminate federal protections for transgender people, the Trump administration is pushing back in defense of its enforcement of the law — but with a statement that is filled with errors and blames the Obama administration for undercutting transgender rights.

Caitlin Oakley, an HHS spokesperson, said the department has no comment on “alleged, leaked documents,” which the New York Times reported Sunday was being spearheaded by the Department of Health & Human Services and would restrict the definition of “sex” under federal law to biological gender.

In defense of current policy, Oakley blamed the Obama administration for enforcement of the law excluding transgender status from the definition of “sex.”

Oakley also asserted HHS continues to apply the law fairly and enforces all laws under its purview against discrimination.

“Everyone deserves to be treated with respect and HHS’s Office for Civil Rights will continue to vigorously enforce all laws as written and passed by Congress, prohibiting discrimination in healthcare on the basis of race, color, religion, national origin, sex, age and disability,” Oakley added.

For starters, the response appears to conflate two separate rulings in 2016 from U.S. District Judge Reed O’Connor in Texas, although both rulings were against transgender rights.

The part about a ruling in December 2016 seems to reference O’Connor’s decision against an Obama-era regulation interpreting Section 1557 of the Affordable Care Act, which bars sex discrimination in health care, to prohibit bias against transgender people, including refusal of gender reassignment surgery.

But the part about Title IX of the Education Amendments of 1972 appears to reference another anti-trans decision from O’Connor in July 2016 barring the Obama administration from enforcing its guidance requiring schools to allow transgender kids to use the restroom consistent with their gender identity.

In either event, the response makes incorrect statements about the Obama administration’s role in these lawsuits and falsely accuses the previous White House of supporting the decisions.

If the statement was intended to reflect the Obamacare ruling, the decision to refuse to appeal the preliminary injunction rests solely with the Trump administration. The deadline for the Justice Department to appeal the decision was March 2017, when U.S. Attorney General Jeff Sessions was the running the show. At that time, no action was taken.

Josh Block, a senior staff attorney with the American Civil Liberties Union, affirmed the decision to let the Obamacare ruling stand rested with the Trump administration, not the Obama administration.

“The Trump administration made the decision not to appeal,” Block said. “The PI decision came down just before New Year’s Eve in December 2016, and the federal government had 60 days to file an appeal.”

“Even if a protective notice of appeal had been filed during the last weeks of the Obama administration, that appeal could have been pulled, just as Jeff Sessions pulled DOJ’s appeal challenging the nationwide injunction to the transgender student guidance on his second day on the job,” McGowan said.

If the statement was intended to reflect the Title IX ruling, the Justice Department under U.S. Attorney General Loretta Lynch, although the Trump administration later reversed those decisions.

The Obama administration filed a notice of appeal on Oct. 20, 2016, and later asked O’Connor to reconsider the nationwide application of his order.

Jon Davidson, legal director for Freedom for all Americans, affirmed the “Obama administration did appeal Judge O’Connor’s preliminary injunction ruling” in the Title IX case contrary to HHS’s statement, but added the notion the order remains in force “also is a lie.”

“The same day that the Fifth Circuit dismissed the appeal, the plaintiff states that filed the Texas v. U.S. case dismissed their case because the Trump administration withdrew the Obama administration policy and guidance that the states were suing over,” Davidson said. “As expressly stated in the Notice of Voluntary Dismissal filed by the plaintiff states this dismissal ‘necessarily dissolved’ the preliminary injunction, which is no longer in effect.”

McGowan said the Justice Department overall has acted in ways that serve to bolster its interest when judges issue anti-LGBT decisions consistent with the Trump administration’s policy.

“The fact is this Department of Justice had no interest in appealing Judge O’Connor’s ruling [on health care] because it is aligned with their own ideology and policy preferences, as evidenced by the fact that within 48 hours of assuming the position of attorney general, Jeff Sessions pulled the plug on a DOJ appeal from a different Judge O’Connor ruling that prevented the Department of Education from protecting transgender students nationwide,” McGowan said.

Regardless of which case HHS was referencing, the blame on the Obama administration seems likely an attempt to shift responsibility to someone else for the underlying outrage over the anti-trans memo reported in the New York Times, which has nothing to do with any anti-trans decision from the courts. (In fact, the memo is contrary to at least eight federal appeals court rulings and 35 trial court rulings finding the definition of “sex” under federal law applies to transgender status, according to the National Center for Transgender Equality.)

Davidson said whomever is advising the Trump administration on transgender rights “appears to have as tenuous connection to the truth as they do to the law, sound public policy and the facts regarding transgender people.”

“HHS’s blaming the Obama administration and their reliance on a terribly flawed and now dissolved preliminary injunction that was and remains in conflict with the overwhelming majority of federal courts which have held that, properly construed, Title IX protects transgender students is shocking,” Davidson said. “Although it is hard for anything the current Departments of Justice, Education, or Health and Human Services do or say on LGBTQ issues to surprise me anymore, this manages to, and it is appalling.”