I’ve always said that the change we need in this country — real change — doesn’t come from Washington, it comes from folks like you. Change has always come from ordinary Americans who sit in or stand up or marched to demand it. The National Gay and Lesbian Task Force has been a partner at the forefront of that movement for 40 years. … With your help, we will continue the journey to perfect our union. The work will be hard, the road will be long, but I’m more confident than ever that we will reach a better future as long as Americans like you keep reaching for justice — and all of us keep marching together.

The video from President Obama comes days after his inaugural address, which included a plea for gay people to be treated equally under the law and referenced a historic moment in the modern civil rights movement for LGBT equality — Stonewall — alongside other landmark  civil rights moments like Selma and Seneca Falls.

For Task Force Executive Director Rea Carey, who gave a “State of the Movement” address this afternoon, President Obama’s words were inspired by the work activists on the front lines do every day.

“Because of your work, the work you in this room have done for decades … you made those words come out of president’s mouth,” Carey said of Obama’s inauguration speech.

It was definitely one of the brightest highlights of the conference so far.

Also shining bright were the stories of those attending — more than 3,300 people and the largest conference in its 25 year history, according to organizers. 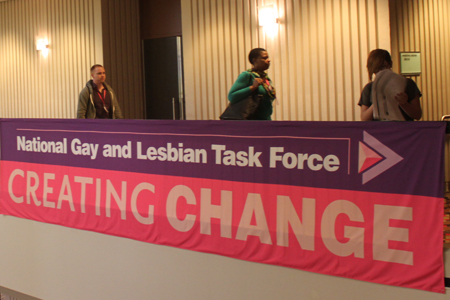 Walking through the hotel, people were huddled around tables discussing politics. In the numerous meeting rooms, hundreds of workshops were taking place — everything from “Talking about LGBT Issues with Religious Traditionalists,” and “There is No Wrong Way to Have A Body” to “LGBTQ Youth Suicide Prevention” and “From Bathroom Panic to Basic Rights: The Message on Trans Rights Legislation.”

People wanted to know how to better organize in the rural South, how to reach people of color, how to connect racial ustice to the fight for LGBT equality. By breaking up in small groups in these packed seminars, people developed ideas and learned from others.

And that’s the entire goal of the conference — to share ideas and success stories so people can take the renewed energy and implement fresh strategies where they live to continue the successes of the LGBT movement. 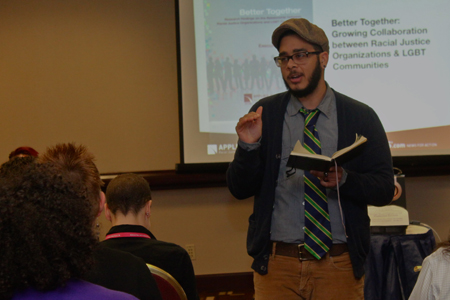 I was happy to see state Rep. Simone Bell (D-Atlanta), a longtime fierce LGBT activist who was in her element at the conference.

I also met Dan Choi, the former Army infantryman who became a famous LGBT activist when he came out on “The Rachel Maddow Show” in 2009 and later chained himself to the White House fence to protest “Don’t Ask Don’t Tell.” The onetime outspoken activist declined an interview, however, because he said he’s decided he can learn more by listening and not speaking on the record.

I also ran into Daniel Hernandez, the openly gay intern to Rep. Gabriele Giffords when she was shot in the head by a gunman on a rampage at one of her neighborhood meet-and-greets in 2011. Hernandez cradled the stricken congresswoman’s bloodied head in his lap and talked to her while trying to stop the bleeding. He is credited with saving her life and was hailed as a hero by President Obama. Hernandez has written a book that is coming out next month. He also celebrated his 21st birthday today.

While there’s a bunch of serious stuff going on, funny lesbian and mistress of ceremonies Kate Clinton made everyone laugh with some of her political humor when she announced the “cancellation” of two workshops. 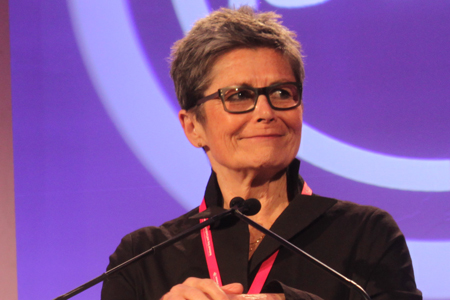 The first workshop canceled, she said, was by Jodie Foster, “which was going to talk about the confusing coming out story and its effect on people now coming out who don’t know what to say, like I’m in love with a gender.” Clinton noted it had been canceled “due to the respect we have for Jodie Foster’s privacy.” The crowd roared with approval.

The second canceled workshop was “Catfishing and the Closet.”

“This was a tragedy but the workshop ‘Catfishing and the Closet’ is canceled because it turned out the person who organized it did not exist,” she said. And that was met with equal laughter from the audience.

It was a good day to be lesbian, gay, bisexual, transgender, queer, questioning, intersex, asexual, and any other letter in our movement’s alphabet soup.

On Saturday, Pulitzer-winning journalist Jose Antonio Vargas, founder of Define America, will lead an afternoon plenary on the DREAM Act and connect the dots between immigrations rights and LGBT equality. Read an interview with him by clicking here.