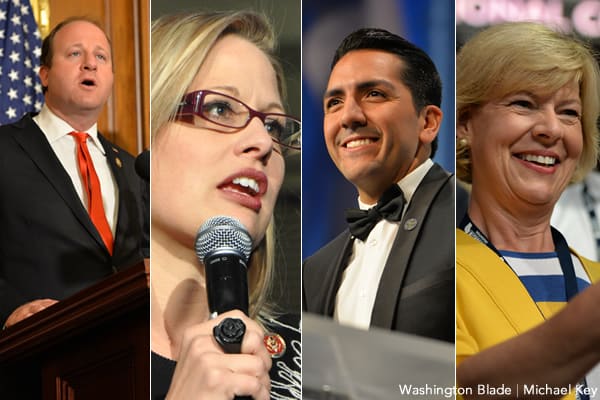 What’s at Stake for LGBT Americans on Election Day

As voters head to the polls on Nov. 6 for the 2018 mid-term elections, they will decide a number of races (and one ballot question) that will directly impact the LGBT community.

Here is the Blade’s rundown of races to watch and the possible outcomes: The only LGBT-related ballot question in 2018 is Question 3 in Massachusetts, where voters will decide whether to uphold a law barring anti-transgender discrimination in public accommodations.

Signed into law by Republican Massachusetts Gov. Charlie Baker in 2016, the Massachusetts law has been targeted by anti-trans groups, who put the measure up for referendum. Anti-trans groups stoked fears the law will enable sexual assault by allowing men to enter women’s restrooms. (That is false. In fact, a study from the Williams Institute, at the University of California, Los Angeles, have found non-discrimination protections have increased safety in public restrooms.)

Signs are good Massachusetts voters will uphold the law. A Suffolk University/Boston Globe poll published on Monday found 68 percent of voters favor keeping the law in place compared to the 28 who want it repealed.

The outcome of the vote either way would have a significant impact on transgender rights. If voters affirm the non-discrimination law, it would signal growing support for transgender rights and discourage anti-trans political attacks elsewhere. But if voters reject the transgender protections, it could set a precedent for anti-trans attacks to come. A bevy of lesbian, gay and bisexual candidates are seeking election to the U.S. House and could significantly shake up LGBT representation in Congress if they’re victorious.

The LGBTQ Victory Fund has endorsed 12 congressional candidates who will be on the ballot next week. Four of them are openly gay incumbents: Reps. David Cicilline (D-R.I..), Mark Pocan (D-Wis.), Mark Takano (D-Calif.) and Sean Patrick Maloney (D-N.Y.). (With Rep. Jared Polis (D-Colo.) departing Congress to run for governor, Cicilline will become the most senior openly gay member of the House next year.)

Each of these congressional candidates could achieve milestones in their own right. In Kansas, attorney and former mixed martial arts fighter Sharice Davids is challenging Rep. Kevin Yoder (R). If elected, Davids would be first female Native American in Congress and first out lesbian to represent Kansas. Polls have consistently given Davids a lead in the race by single digits.

Other candidates would be the first openly gay people to represent their states in Congress: Lauren Baer in Florida, Angie Craig in Minnesota, Rick Neal in Ohio, Gina Ortiz Jones in Texas and Chris Pappas in New Hampshire. Katie Hill in California and Tracy Mitrano in New York could be the only out bisexuals in the House.

The election of each of these candidates would double the size of the LGBT Equality Caucus in the House, making it comparable to the size of other minority caucuses. Other LGBT candidates could make history by being the first openly gay and transgender persons elected as governor.

Democrats have nominated to run for governor in 2018 one candidate each of every segment of the LGBT community: Lupe Valdez, a lesbian, in Texas; Jared Polis, a gay man, in Colorado; Kate Brown, the incumbent bisexual governor in Oregon; and Christine Hallquist, a transgender woman, in Vermont.

Polis, a five-term member of Congress, seems most poised to achieve a milestone. Polls in recent weeks have Polis between seven and 12 points ahead of his Republican opponent, Colorado State Treasurer  Walker Stapleton. If Polis wins, he’d be the first openly gay person elected governor in the United States.

As the incumbent governor in Oregon, Brown also is favored to win election. However, the race is actually tighter than Polis’ in Colorado. In several polls over the past few weeks, Brown has polled between one and five points ahead of her Republican challenger, State Rep. Knute Buehler. Real Clear Politics designates the race as a “toss up.”

Unlikely to win are the other two candidates. Valdez has consistently lagged behind Texas Gov. Greg Abbott in polls by double digits, in some cases by more than 20 points. Despite the historic nature of Hallquist’s candidacy as a transgender nominee for governor, Hallquist is also behind incumbent Republican Gov. Phil Scott. House Minority Leader Nancy Pelosi (D-Calif.) has signaled the Equality Act will be a “top priority” if she becomes speaker. (Blade photo by Michael Key)

The election outcome that will have the biggest impact on the nation as a whole, not just LGBT people, is the possibility of Democrats taking control of the U.S. House, ending the monopoly of Republican control in both Congress and the White House.

But Pelosi has identified also as a personal priority the Equality Act, which would amend the Civil Rights Act of 1964 to ban discrimination on the basis of sexual orientation and gender identity in employment, housing, public accommodations, jury service, education, federal programs and credit.

Democratic control of one chamber of Congress is likely not enough for the Equality Act to become law, but movement in the House could set the bill up for passage in subsequent years with a more favorable Senate and White House. Kyrsten Sinema in tight race for U.S. Senate in Arizona

Kyrsten Sinema achieved a historic first this year when she became the first open bisexual to win a major party nomination to run for U.S. Senate, but despite expected Democratic gains, a win for her on election night in Arizona is in question.

Amid political attacks for her past anti-war protests and public comments disparaging Arizona as “crazy,” Sinema’s former lead in the race against Rep. Martha McSally (R-Ariz.), the first female commander in the U.S. Air Force, has dissipated. McSally has taken the lead in several polls by a slim margin.

But the race is still tight and could go either way. McSally has admitted she’s getting her “ass kicked” over her vote to repeal the Affordable Care Act, according to USA Today. In Arizona, 1 in 2 people are insured thanks to the Medicaid expansion under Obamacare.

Another U.S. Senate race with an LGBT candidate once thought to be competitive was Sen. Tammy Baldwin’s (D-Wis.) bid for re-election. But polls show Baldwin, the only out lesbian in Congress, well ahead of her Republican challenger, State Rep. Leah Vukmir, by as much as double digits. Other LGBT candidates are poised to make history because their wins would make them the first openly gay people of color to win statewide office in the United States.

Both candidates are first-generation Americans. Lara was born of parents who entered the United States illegally from Mexico and Araujo’s parents were refugees of the Salvadoran Civil War. A win for either candidate would be a first not only for the LGBT community, but also the immigrant community in the United States.

Polling is scant in these less than high-profile races. Araujo is facing the daunting prospects of challenging an incumbent, Republican Nevada Secretary of State Barbara Cegavske, but may do well if bolstered by a “blue” wave on Election Day. Lara is running for an open seat against Steve Poizner, an independent candidate who previously served as insurance commissioner.