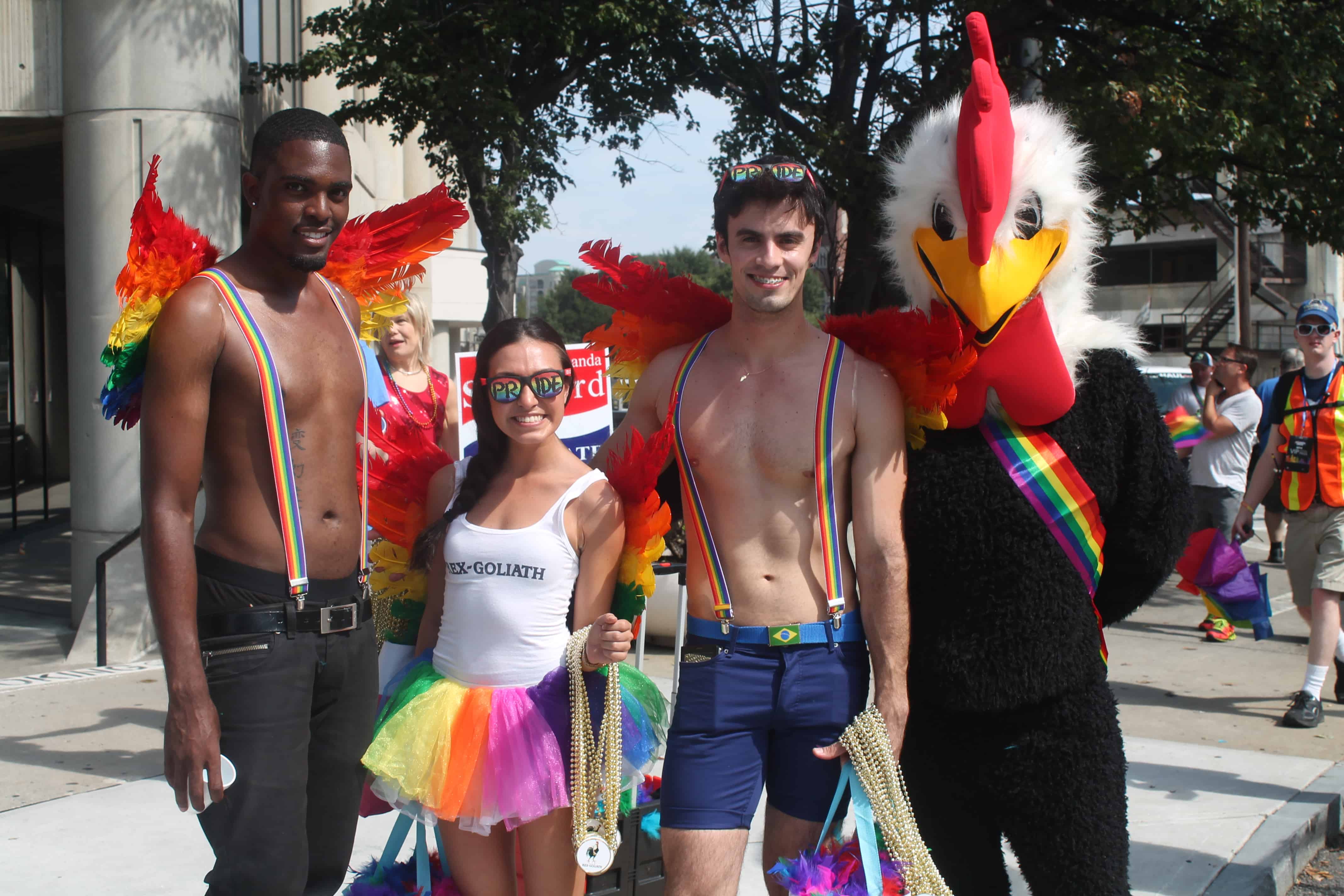 [PHOTOS] Behind the scenes and along the Atlanta Pride parade route

Taping up last-minute crepe paper ribbons, blowing up bright balloons and then sticking them onto posts covered in tinsel mounted on flat bed trucks, drag queens putting final touches to their colorful costumes, grand marshals being matched to their convertibles—all of this plus more and plenty of dance music and laughter take place behind the scenes of the Atlanta Pride parade as entrants readied themselves near the Civic Center MARTA station on Sunday, Oct. 12.

Marching with the GA Voice this year were Kordale N Kaleb and their three children. The fathers achieved national fame when an Instagram photo of them combing their daughters’ hair in January went viral. Kordale wrote a book, “Picture Perfect,” about his life and what led up to that Instagram photo.

Along the route on Peachtree Street to 10th Street and into Piedmont Park, thousands of people lined up with their own signs, waving rainbow flags and spurring on marchers and riders.

At the corner of Peachtree and 10th, where a huge crowd always gathers, parade participants were greeted by anti-gay protesters; a smaller batch of them heckled people at the Trans March. The Pansy Patrol, like last year,  lined up and used flower power to block the hate, although those standing in the area were forced to listen to vile and disturbing language from the so-called street preachers. You can watch a video made by the preachers at Atlanta Pride, posted by Joe.My.God., by clicking here.

Also assisting in the blocking of the anti-gay signs was Angel Action Atlanta Malachim, a chapter of a national organization founded to block Westboro Baptist Church during its protests of Matthew Shepard.

The mission of Angel Action Atlanta, “We are the silent barrier of love and compassion between those who chose to protest the differences that make us who we are. We quietly spread our wings between those who are grieving or celebrating our uniquenesses to shelter them from the hate of those who choose not to understand or accept us. Romaine Patterson began this movement for her friend, Matthew Shepard, which we hope to continue, as faithfully as we are able. Love truly will conquer all.

The Pansy Patrol posted to its Facebook page on Wednesday thanks to those who helped out and promised to return next year:

It was exhausting, exhilarating, and once again this year unbelievably rewarding. Thanks also go out to all the unnamed pansies people) on the parade route who “picked” a pansy from our batch and helped block out the protestors. They offered us water ……gladly gave up their “spots” to allow us to block the protestors, and supported us in more ways than they will ever know. A thank you to the roaring crowd on the corner of Peachtree and 10th ….talk about a moment we will never forget! Thank you to the lines of pride revelers gay, straight, bi, trans….. all ages, races, and religions who approached us at the end with words of encouragement and thank you. WOW that made it worth every bit of sweat. We are honored! Rest assured….. WE WILL BE BACK!! Love! The Pansy Patrol

And we will be there next year as well, showing our pride in who we are despite what others may believe.