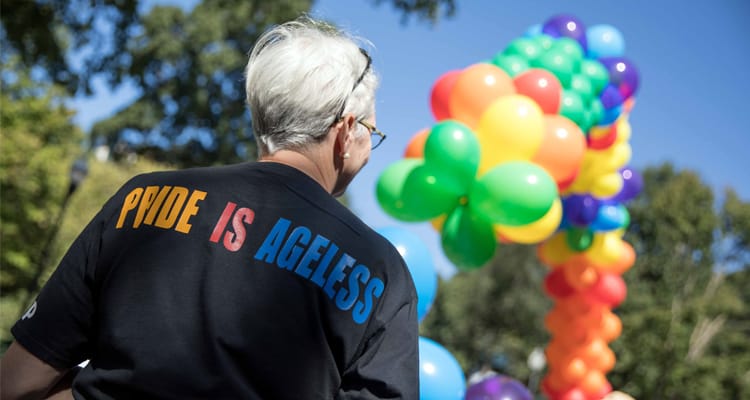 It was 1992. Annise Mabry was 18, freshly out as lesbian, attending her first Atlanta Pride.

“It was at the height of ‘Don’t Ask, Don’t Tell.’ It was at the height of Lesbian Avengers; it was at the height of Act Up! when Cracker Barrel was firing employees for being gay,” Mabry, a 2019 grand marshal for Atlanta Pride, told Georgia Voice. “We were marching with a Jewish congregation. The Pride parade that year was very small. They had just done the March on Washington and they decided, we wanted to do something like that here in Atlanta. When we turned the corner I heard glass shatter. [Atlanta Police Department] didn’t protect us at this time. All we had was each other. The people from the Jewish congregation — we were kids — formed a human shield on both sides of us, and they marched us down so we could finish the parade.”

That emotional image is burned into her memory.

“I’ve lost my family because my family didn’t support me coming out and I really thought everybody in the world hated me. That Pride, that made me who I am,” she said. “That gave me the fight to want to be visible, to never allow myself to be silent because I remember what those people who didn’t even know me, what they did for me.”

Mabry, founder of the nonprofits Dr. Mabry Foundation and Tiers Free Academy, wants everyone to have that experience of community at the 2019 festival, no matter their ages.

“The World Health Organization said the most prevalent ‘ism’ that has become widely sanctioned is ageism. Old people are generally ignored, they’re invisible,” said Mary Anne Adams, founding executive director of ZAMI NOBLA. “One of the reasons why I started ZAMI NOBLA was because I saw increasingly, older lesbians disappearing from the Atlanta scene, because it was becoming increasingly youth-oriented. There were a lot of spaces where we were invisible or didn’t feel welcome.”

Enter Gray Pride. AARP and several of its partner organizations, including ZAMI NOBLA, intentionally created an area geared toward LGBTQ seniors in Piedmont Park this weekend. It’s the place to be for those looking for a place to sit, out of the heat, and enjoy refreshments, community and even a multi-racial, multi-generational ukulele ensemble.

“We literally have an event happening within the larger event,” Hillary Thomas, associate state directory of advocacy and outreach for AARP told Georgia Voice. “We took some time before we started hosting this event to ask different groups of older adults, what are they missing at Pride? They said, ‘We don’t necessarily like to walk around the park the whole time, or we just need a place to sit down that is appropriately heated or cooled, and we need something to drink and a snack. ’We took that and let it bloom.”

Richard Harlan, membership director for Atlanta Prime Timers, has been attending Atlanta Pride off-and-on for 20 years. Even with areas like Gray Pride, he expressed concern about older LGBTQ folks accessing Piedmont Park to begin with.

“We have mobility issues now,” Harlan said. “There’s just not a lot of parking and we are on rolling walkers now, so the point for us is, if we can’t get close to something, we don’t go.”

That means some festivities, like Pride Village, are “now pretty much beyond us.”

Several individuals told Georgia Voice that due to the crowd at Pride, vehicles like golf carts, which could help with mobility concerns, are not allowed for safety reasons. Making changes like that could require changes from the city, which requires a different level of community: community activism.

“In my experience, there’s not much that happens without advocacy and lobbying and pushing people to do the right thing,” Adams said. “This becomes an issue where all of us are going to have to make a concerted effort in collaboration and coalition and push the city.”

In his younger years, Harlan lived in Boston, and vividly recalls being part of the festivities. “We used to literally join the parade in Boston as it passed us, and by the time we got to Boston Common, all the people who were watching were part of the parade. It was quite a tradition,” he said. “Pride is a celebration of who we are and where we hope to go.”

Amy “Vava Vroom” Ferzoco, board chair and president of Dykes on Bikes Atlanta, began attending Pride celebrations in her early 20s, and watched them change for nearly two decades.

“There are a lot more kids. There’s a lot more of the traditional family at Pride, which is wonderful and what we’re all going for, but it definitely brings a different experience,” Ferzoco said. “They’re trying to make things accessible to family and transfolk and seniors and everyone that they possibly can, but the resources shift what gets attention. It’s a cleaner pride — I mean vanilla. There’s less nudity; there’s a lot of protest signs which is great; but there’s a lot less of that ‘rah we’re queer!’ and visually, here’s our sexuality.”

Dykes on Bikes regularly opens the Pride parade, and its members have a wide age range, so bridging the gap between younger riders and emeritus enthusiasts who are no longer able to ride is a constant discussion within the group.

Unfortunately, Thomas said, that’s a myth in many places, including the long-term care facilities that may house LGBTQ individuals.

Two years ago, AARP did a national study called “Maintaining Dignity” to investigate the needs of LGBTQ seniors. Thomas said some research shows that LGBTQ adults overwhelmingly fear being neglected in such a facility, and there’s concern about having to go back in the closet in order to get the care they need due to age, mobility or disease.

One way AARP aims to address those concerns is with its “Prepare to Care” guide, which was revamped recently to include a volume for LGBTQ caregivers. That version includes guidelines on asking for pronouns, and teaches that an individual’s pronoun or appearance may not agree with society’s standards on how someone should dress or refer to themselves.

It goes back, in part, to visibility.

“It’s really important to make sure that all segments of the LGBTQ community are represented in every space in this city, and I encourage older folks to continue to attend Pride; to be brave, to be visible, to be out,” Adams said. “We have to be seen, all of us, in all of our rainbow color.”