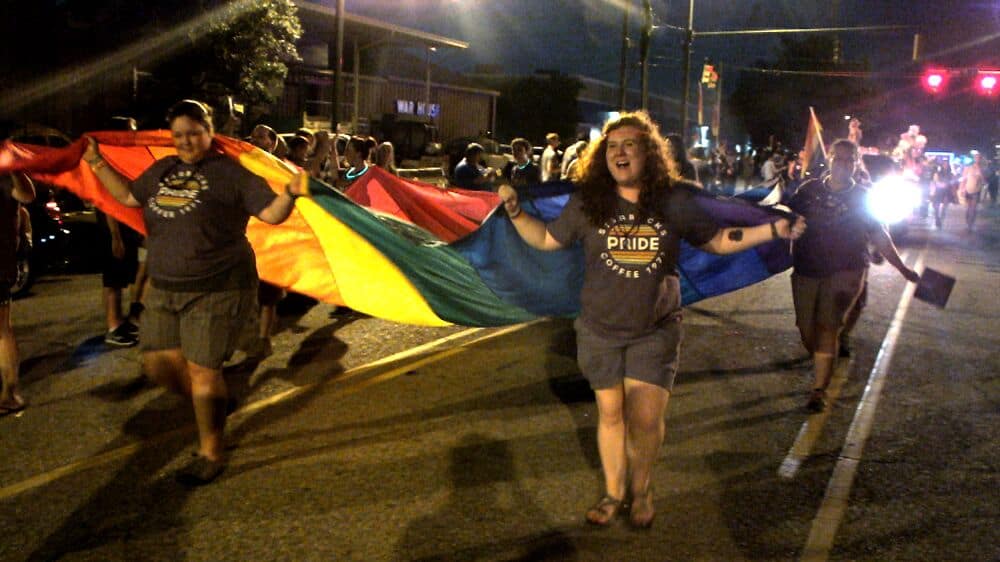 Pride celebrations are multiplying at a rapid pace across the globe, even in the most peculiar of places, such as the deep southern pockets of the Bible Belt, where the politics wreak of a radical fundamentalism resistant to LGBT rights.

Birmingham, the largest city in the state of Alabama, is home to Central Alabama Pride (CAP). It’s billed as the oldest and largest Pride festival in the state. With its roots dating back to 1978, CAP is responsible for hosting its annual week-long itinerary of “10 Days of Pride” culminating with PrideFest, which for the last few years has been held on the campgrounds of Sloss Furnaces, a former pig iron-producing blast furnace.

The annual Pride celebrations in Birmingham have come a long way from its beginnings, especially since its very first gay and lesbian parade in 1989.

“When I first got here sixteen years ago, there were very few floats,” said J.R. Finney, pastor of Covenant Community Church. “I remember when our church was one of four floats in the parade. You have a lot more participation now, a lot more groups. We have made a lot of progress.”

The city itself is going through a lot of progress as well. It’s in the middle of a much-needed economic boom, which is attracting suburban millennials and young professionals to its downtown core. Despite the upward trend of the city’s prettier image, the city is still experiencing a level of growing pains in regards to its snail-crawl progress on LGBT rights.

The biggest obstacle hindering the city’s progress on LGBT rights is the lack of a non-discrimination ordinance in place to protect LGBT employees in areas of employment, housing and public accommodations. But Alabama state Rep. Patricia Todd, the state’s first openly gay legislator, is optimistic about the future of the area, even as far as the state’s modern-day politics.

“Alabama didn’t pass any anti-gay legislation in our last session,” she says. “We were one of the only southern states that didn’t, and we hope to keep that tradition alive. Do we have a long way to go? Absolutely we do. But hate can go anywhere, and we’re just not gonna tolerate it.”

Finney carries the same torch of hope but believes the key to ending homophobia in the conservative-dominated South is in the hands and hearts of the young.

“I think what is happening is that more and more young people are coming out,” he says. “You see more young straight kids who just don’t care. [They say], ‘That’s my friend, nothing’s gonna change.’ And unfortunately, some of the old hats are going to have to die off before there is real change.”

‘A blue dot in a very red state’

After Saturday’s sunset, right before the Pride parade is scheduled to start, a robust crowd gathers on the blocks of 7th Avenue South and 27th Street South, where two gay bars are only blocks away from one another. For some, this is their first Pride experience. And like most momentous firsts, this is extra special for them. Greg Payne, who is new to Pride culture, also sees the value of Pride events in Birmingham, a city that Rev. Finney describes as “being a blue dot in a very red state.”

“I feel that Birmingham is a relatively gay-positive city to begin with,” says Payne.

“We do live in the South where people kinda keep things to themselves, but I don’t see a lot of outward hate. I didn’t see a lot of protest ers here tonight. People were warning earlier about protesters, but I hardly saw any.”

Finney, once a contributor of Atlanta Pride in its early years, also sees the type of mentorship that Birmingham offers smaller towns.

“[At Pride], I try to talk to a lot of the young people that I see and it’s amazing how many of them do not live in metropolitan Birmingham,” said Finney. “They live in real small cities, but they come here for this weekend because they can be out and proud. They consider Birmingham what we used to consider Atlanta.”

Only hours later after the parade, Birmingham learned of the bloodshed at LGBT nightclub Pulse in Orlando and anxiety started to set in. The news of the Orlando tragedy forces CAP to create an impromptu neon stick vigil at PrideFest and a citywide vigil – in cooperation with city officials – on the following Monday afternoon.

“We all are heartbroken about Orlando,” Todd said. “But we all know that we can be victims at any time. That won’t stop us from moving forward.”