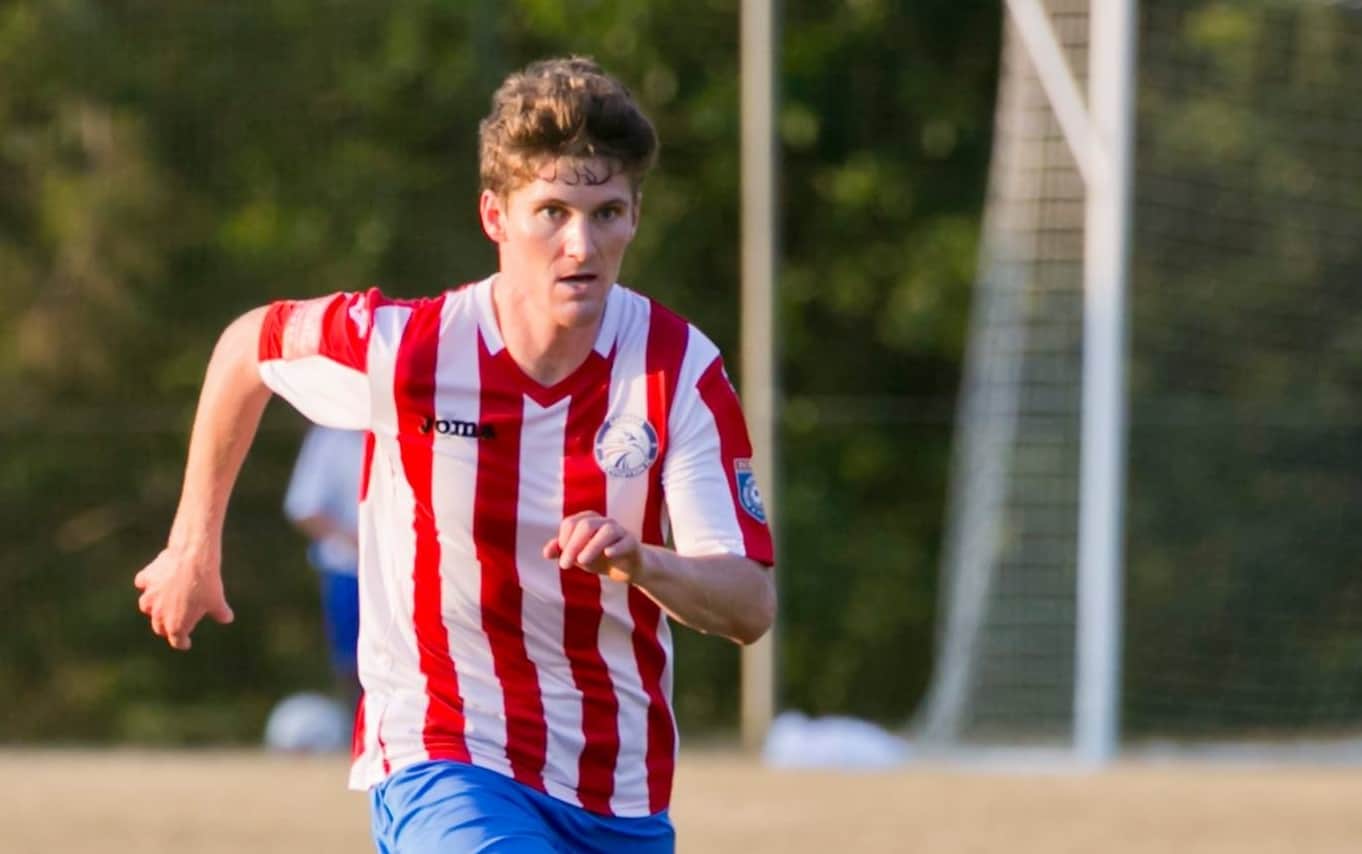 Adam McCabe is a midfielder for the semi-pro Georgia Revolution FC who came out in a first-person essay published online last December. McCabe wanted to share his thoughts on homophobia at Atlanta United games and his hopes for the future. If you would like to submit an editorial to Georgia Voice, email it to editor@thegavoice.com.

It felt like Christmas morning for thousands of other soccer fans in Atlanta. Sunday, March 5, 2017, was the dawn of a new sports era in our city. For years, a void existed here for professional soccer, and this multicultural hub of diversity longed for the day when the beautiful game would return. Now, after waiting so patiently, the people of Atlanta have a team they can call their own.

On game day, the city was spewing with excitement – everywhere you looked, there were scenes of fanfare, of red and black flags, and an optimistic spirit was tangible in the city. My partner and I took MARTA to the game. As we walked up the steps of the Five Points MARTA Station, hundreds of people raced by us with flags, scarves and jerseys, uniting the city for a night. There was a brief pause as we waited in line to exit, and in a moment my partner looked at me and stunned me with a single question: “When are we going to bring a Pride flag to an Atlanta United game?”

At first, I didn’t have an answer for him. I’m proud to be out, to be open and honest with whom I am. But I had never thought of myself as an individual who would bring a Pride flag to a sporting event. “Let’s see how this one goes,” I replied. I had no idea what type of response a Pride flag would get at a soccer match in the South.

The game started out as I thought it would, with two nervous teams – Atlanta United and New York Red Bulls – testing out the waters in their season opener. Midway through the first half, Red Bulls goalkeeper Luis Robles took a goal kick in front of the Atlanta United supporters’ section. As he went to clear the ball, a single moment changed my experience at the game. A huge wave of fans shouted from the crowd – “¡puto!” – a homophobic, offensive phrase, in an attempt to distract Robles and put him off his kick.

The game continued, with no interruption, as if nothing had happened – yet something major had just occurred. A few minutes later, another goal kick for Luis Robles, and again the huge shout – “¡puto!” – but this time, a bit louder. When the obscene word was heard again, my partner tapped me on the shoulder and asked: “What are they saying?”

I nonchalantly explained to him what the definition of “¡puto!” meant, its origin, and why our fans were saying it to the opposing goalkeeper. The look on my partner’s face turned from inquisitive, to sour and disappointed. “Really?” he replied. ‘That’s common at soccer games?” And in that moment, I had no answer, because there wasn’t a good one.

Every time Luis Robles took a goal kick, I caught my partner looking at me from the corner of his eye. He would hesitantly turn around to gaze at the mix of individuals, drunkenly shouting the obscenity just two rows behind us. This was not the experience I was hoping for. I wanted so badly for him to enjoy the game I grew up with and loved.

After the match, we spoke about our experience and whether Atlanta United games were something we could share together in the future. Looking back, I wished it could have been without the homophobic language, (and that Atlanta United had won), but I chose to appreciate our time together. As we talked, I stated, “I’m not sure our fans would be ready for a Pride flag.” He looked at me, and chuckled before replying: “Yeah, probably not.”

The day after Atlanta’s inaugural home match, I heard countless analysts applaud the play of Atlanta United. However, what surprised me was the amount of negative press Atlanta United was receiving after just one match. Our supporters’ actions and behavior had caught the attention of international coverage, from the likes of ESPN, Yahoo and Deadspin. The obscenities and homophobic language by the Atlanta United fans was criticized galore. I hated to think that people worldwide were misunderstanding and judging our fans and our amazing city.

As expected, Atlanta United was quick to make a statement, condemning the language and behaviors of such fans. As a new MLS franchise, the fans of Atlanta United have a new opportunity to reshape the soccer fan culture of our city. Why not take this with open arms, at the highest level of professional soccer in the United States, to show our country who the people of Atlanta truly are?

After our dominant 6-1 win away to Minnesota United, I was eagerly anticipating the next match at home to Chicago Fire. I hoped Atlanta United could maintain their good early form and start to create a dominant presence on their home turf. On another note, I contemplated how our fans might react to the negative publicity from the first home game and if anything would change.

I read comments on Dirty South Soccer from writers and readers who thought silencing the obscene language from the inaugural match would be almost impossible. With 55,000 fans at a soccer game, being able to control and influence every single individual was unrealistic. Instead, we needed to focus on how to inspire and encourage the majority of fans to exclude this language. The one idea that caught my eye was a “Hey Ya!” chant (a throw back to Outkast). Done successfully, the majority of fans could drown out any offensive language.

My partner and I were excited to attend the next game together. As the first notable goal kick came to Chicago, I remember looking my partner dead in the eyes. We had both been waiting for this moment since the game began; waiting to see how our fans would react and respond to the negative coverage of our behavior. As Jorge Bava lined up for Chicago Fire to take the goal kick, I looked towards the supporters’ section. A low rumbling “Hey…” filled the section, being led by Terminus Legion. The man next to me, who was at the game with his young boy, joined Terminus Legion, adding his “Hey…” to the thousands of others in the stadium. As Bava kicked the ball, the stadium – including the man next to me – erupted with a powerful “Ya!.” I looked back at my partner, as the goal kick flew out of bounds, and gave him a big smile.

The second home game was a much better overall experience. The fact that our fans and community had positively responded to the hateful behavior shown in the first match made the victory that much sweeter. As a community, we had come together to stand up in the face of homophobia in our sport and home. As my partner and I descended down the 5 Points MARTA escalators, we chatted about the game. I said, “Maybe we actually can bring a Pride flag to a game sometime soon.” That brought a big smile to his face.

After the reaction by our fans, community and organization, I am still optimistic that not only will we have a successful team, but that we will also have a community and organization that is all-inclusive. I am hopeful that, after the dramatic shift from the first home game to the second, our fans can prevail in eliminating homophobic language from our identity and culture.

It has been almost a month since our last home game, and I am hopeful that the Atlanta United fans will revert to the appropriate behavior in our next home game (April 30). Consistency is key when continuing to fight homophobia and hate. I applaud our growth in such a short period, but we need to remain consistence, to remain progressing and moving forward.

I challenge Atlanta United fans reading this article to evaluate their actions at games, and how they could be negatively impacting and affecting the experience of others at a game. Remember that this is the best sport in the world because it is the people’s game – it belongs to every individual, no matter their sexuality, religion, political beliefs or gender. I urge Atlanta United fans to think back to the father that sat by us during the Chicago Fire game with his son, and ultimately chose to display the appropriate, matured and disciplined example for his son. He chose not to pass along hate and negativity to a younger generation. This is the way we must begin to rid this language from the beautiful game.

You can find Adam McCabe on Facebook, and on Instagram @Shakiro_850. You can also reach him on email at adam.mccabe850@gmail.com.