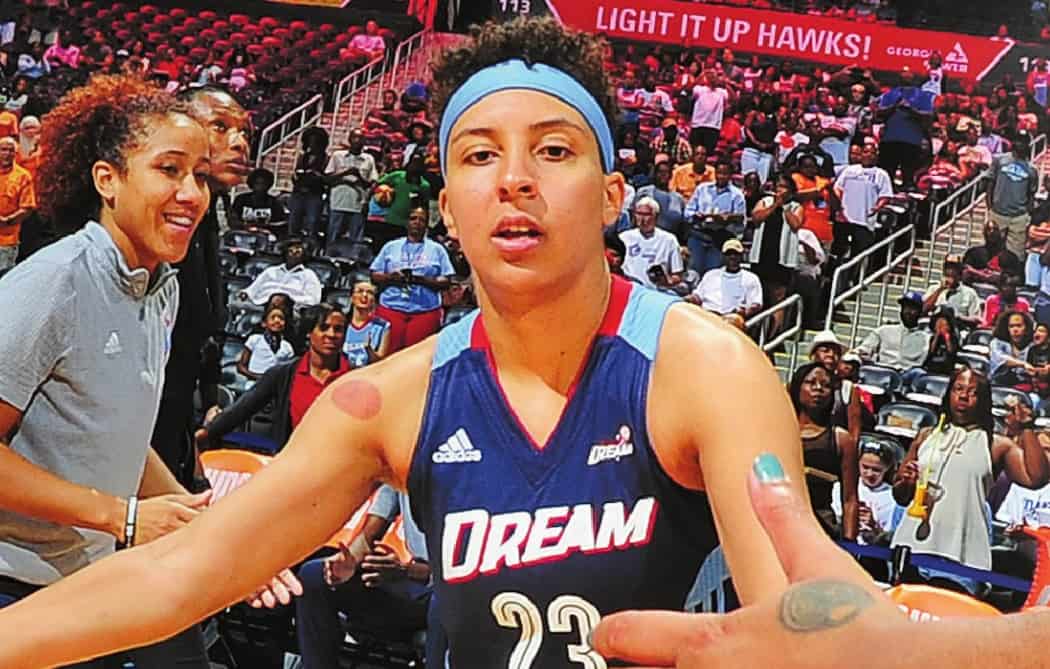 A game in 2014 was to be one of the most momentous in Layshia Clarendon’s fledgling WNBA career. Then a player with the Indiana Fever, Clarendon and her teammates were set to debut rainbow-emblazoned warm-up shirts as part of the women’s basketball league’s groundbreaking effort to openly woo its gay and lesbian fans.

But moments before the bold debut, things fell apart: The team nixed the shirts, triggered, Clarendon would later learn, by some players’ discomfort with the gay-friendly theme. The very teammates that showed outward support, it seemed, were internally conflicted.

“Betrayed and disappointed,” Clarendon recently said of her feelings on that night, adding that it troubled her to know that beneath the veneer of acceptance, homophobia was still so prevalent among some players and coaches.

The 25-year-old has channeled this and similar life experiences into an off-the-court career as a fledgling LGBT activist, speaking openly about issues surrounding homophobia and transgender discrimination. She joins a wave of young athletes increasingly using their public profiles to pipe up about everything from gay rights to police brutality.

“It is generational,” said Clarendon, who now plays for the Atlanta Dream. “The younger people are just being more outspoken.”

This season marks the third in which the WNBA has recognized LGBT fans via Pride-related courtside signage, community events and merchandise that raises funds for gay community groups. The Atlanta Dream will host a special LGBT-themed Pride night on Sept. 4.

Such open embracing of the gay community is special in any sports league, but particularly in the WNBA. Founded in 1996, the league initially fought stereotypes of lesbian-only athletes by promoting a strongly heteronormative, family-friendly image that left its large LGBT fanbase feeling shut out. That began to change in 2014. That year saw league president Laurel J. Richie launch WNBA Pride, responding in part to research that estimated a quarter or more of WNBA season ticket holders identified as lesbian.

Fast-forward to 2016, and the league openly courts LGBT fans with splashy rainbow gear and a special Pride-themed web page.
Off-court, LGBT players themselves have also become more vocal. Seimone Augustus, Shavonte Zellous and Brittney Griner are just a few players who have recently identified as out and proud.

“We’re really turning the tide, where people are using their outness … to build a brand,” Clarendon said.

But it’s about more than simply being trendy, Clarendon said. The players are using their media profile as well as their strong social media followings to raise awareness of issues facing gays and lesbians.

Clarendon herself has used her own voice to press for increased recognition of transgender rights in particular. Surprisingly, she credits things like the fall of anti-gay marriage laws with the rise in attention to transgender issues.

“It got to a point where a Democrat or Republican wasn’t going to run on the whole ‘I’m for or against gay marriage’ anymore, because obviously it’s federally legal,” she said. “So now, it’s shifted to transphobia.”

Clarendon points to victories in the general acceptance of high-profile transgender women like Caitlyn Jenner and Janet Mock. Yet, she feels like much work remains to be done particularly in the LGBT movement itself when it comes to not minimizing trans issues.

In a first-person article she penned in June, Clarendon shared experiences of being misidentified as male based on her non-gender conformist clothing, and lamented the similar experiences of transgender people every day. She later took the community to task for not speaking up for transgender brothers and sisters.

“They are disproportionately at risk for homelessness, poverty, abuse, anxiety and depression,” she wrote. “As a community and as humans, we can’t just settle for gay marriage. We have the responsibility to fight for trans rights with tenacity.”

But make no mistakes Clarendon believes homophobia in sports remains a key issue – as much today as it was during that game in 2014. The difference is now, there are more athlete voices speaking out.

Clarendon, who eventually hopes to go into broadcasting, plans to keep making her voice among the loudest.

“A lot of that has to do with my faith and just getting to a point where I was okay being gay and Christian,” she said. “And then realizing [advocacy] was my calling and my purpose.”