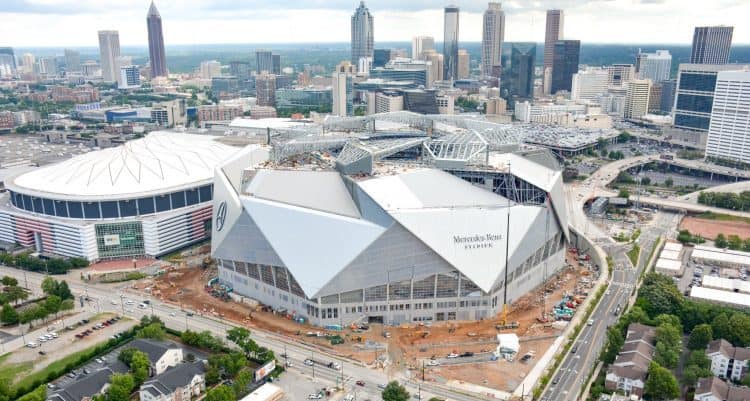 2017 did not start out well for Atlanta’s football team.

In fact, when a portion of Interstate 85 collapsed in April, it was referred to by some on social media as “the second-biggest collapse in Atlanta this year.” The first, of course, a reference to the Falcons’ unfortunate loss in the Super Bowl to the New England Patriots.

But however bad the season ended, the Arthur Blank-owned birds are ready to kick off this fall in their brand-new nest and start a new legacy in the ATL: Mercedes-Benz Stadium.

On June 5, the Atlanta Journal-Constitution reported that the stadium’s impressive retractable roof was moved to the closed position for the first time. The roof’s eight steel panels, each weighing approximately 500 tons, were motorized in a construction highlight eagerly awaited by officials, the team and fans. It took about 12 minutes for the feat to occur.

This first season in the new nest — which dwarfs its next-door neighbor and former Falcons home, the Georgia Dome — will be the Falcons’ 52nd as a franchise. Head coach Dan Quinn so far has a 19-13 record in two seasons, including a NFC division second-place finish in 2015 and NFC championship in 2016. That game was the final one played at the Georgia Dome, where the Falcons beat the Green Bay Packers in an epic finale to the team’s 25-year residence there.

Though only time will tell how the team will tackle its upcoming season, there’s no doubt that Atlanta is excited to see how high the birds will fly in 2017.