For Atlanta Rugby, brotherhood is the tie that binds

Rugby, the English team sport (and distant relative of American football), has spread across the world since its founding in the 19th century. How far a spread? It has an estimated 2.3 million players and 18.6 thousand clubs around the globe. There are fifteen players on the field, a single ball, and one Atlanta team that makes acceptance its calling card. 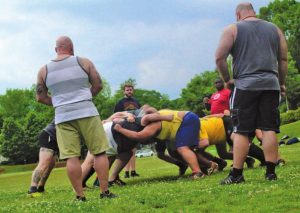 The LGBTQ community and rugby have recently crossed in the news. Rugby pro Israel Folau plays for the Waratahs team in Australian Super Rugby. After Folau posted homophobic messages to social media in April, many rugby players and teams went out their way to support LGBTQ culture. The New Zealand national rugby team, the All Blacks, donned a jersey that, when stretched, displays a rainbow.

In conversations, several players noted that rugby was an open playing field — literally so. It was possible to find camaraderie there, they said, united by the love of the game. Bucks President Blair Dempster said that the rugby community was extremely accepting. He cited the recent New Zealand controversy — specifically, the pushback against Folau — as proof of rugby’s exceptional ability to embrace difference.

Club secretary Ross Brown noted that the team drew from all walks of life.

It’s this embracing nature that lies at the heart of rugby’s appeal to the gay community. Dempster said that group feeling is at the heart of the Bucks. In a very real sense, struggling alongside others is the name of the game.

An intense focus and feeling of evident brotherhood was evident at a recent afternoon practice at Kirkwood’s Toomer Field. In a February profile, Dempster told an interviewer that, “The members of the Bucks span a wide range of ages, backgrounds, races, builds, athletic abilities, athletic experience, sexual orientations. We’re all different, and that’s part of what makes the club an awesome group to spend time with.”

The stated mission of ABRFC is to “provide a fraternal environment, without discrimination, for gay and diverse communities, to participate in the sport of rugby.” The club originates from 2003, and was among the first American members of the International Gay Rugby Association and Board.

It wasn’t long after that the ABRFC began making their mark in the sport. The Bucks won the New York East Coast Invitational in 2006. Two years later the Bucks racked up a solid victory in Dublin: The prestigious Bingham Cup Bowl Division belonged to a Southern team. Then, in 2017, they scored the Independence Cup at an IGR East Championship.

But if you ask the Bucks, they’d probably tell you the biggest win is the fellowship that comes with the sport.
Rugby has a rough-and-tumble reputation. But from the beginning to the end, on close inspection, rugby is a game of acceptance and love. It’s possible there are some people who are surprised by gay rugby. Yet, on a closer analysis, it’s hard to think of a sport more suited to, and more symbolic of, the strengths and tribulations of gay men in the 21st century.

In America, LGBTQ men are in the scrum, day in and day out. Pressure comes from within … and from without. But there is always a shoulder to lean on, and strength can be found all around you — usually about three inches to your right. In other words, they’re all in this together. Up and under, and ready to rumble.