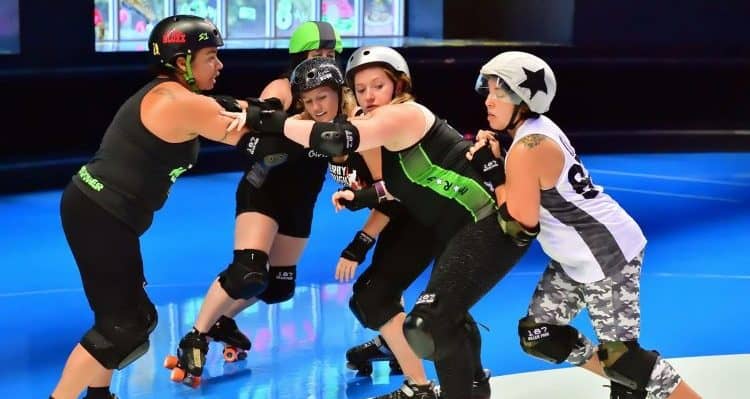 A whole host of sports exist for women today, but none is quite so invigorating as roller derby.

“Anything you do on the track, [the crowd] is so excited about because it’s so different from any other sport they’ve ever seen,” said Liz Wise, president of the Muscogee Roller Girls in Columbus. “I think what amazes people the most is when we’re done knocking the hell out of each other on the track is we shake hands, we hug and we go have a beer together.”

The full-contact sport pits two groups of five women — four blockers and a scorer, called a jammer — against each other on a circular track. Jammers must pass blockers to score points.

“The opposing team will try to knock her down, stop her, try to keep her from scoring,” Wise said.

Today’s derby dames evolved from a nearly 90-year legacy of skating sirens. In the 1930s, the sport was more of a skate-a-thon, then came back in the ‘60s and ‘70s as a more theatrical endeavor, Wise said.

Derby in its modern form came out of Austin, Texas, in the early 2000s, less theatrical than the previous evolution — but they did keep the names.

I am woman — watch me roll

Tess Harrison, better known as Baller Shot Caller, plays for the Atlanta Rollergirls. She moved to Atlanta to be on the team.

Rebecca McAleer, an out jammer on the Middle Georgia Derby Demons, said derby is one of the few ways women can get together, let go and be themselves.

“It’s us cool, strong women being exactly what we want to be and we don’t have to apologize for it,” she said. “The atmosphere is really cool. Alcohol, have a good time being rowdy and excited. Our team tries to stay really family-friendly.”

She said many times, the team leaves without knowing the score, and the audience is always invited to after-parties.

“We have people that are moms over 40 that come out and destroy their bodies for this sport that they love. We have such a great community of skaters that are willing to help our community,” Harrison said.

Karen Glover, president of the Peach State Rollerderby League — which oversees both the Rome Rollergirls and the Marietta Derby Darlins — said most people won’t understand what happens during their first bout, but everyone enjoys watching.

“I really enjoy the way that we are setting an example for other girls and even for young men to show them that women can be out there, they’re playing a sport of all ages, of all body types, across all walks of life and they’re doing it well. I think it’s really important to show that women are strong and they can play a sport,” she said.

Lace up your skates

Wise said some teams have tryouts, while others — especially newer or smaller teams like hers — take all who want to be part. And there are no background skating skills required, though some of the top derby athletes are former figure skaters.

New teammates learn how to skate if they don’t already, then go through assessments learning proper contact and becoming scrimmage-ready.

“It’s a tough thing to go through, advancing through the assessments. A lot of laps, a lot of drills, a lot of footwork, a lot of things that are hard on your body,” Wise said. “I like to think our league is really good about teaching and training the ladies so they love the sport and don’t feel self-conscious about not knowing everything there is to know about derby when they start.”

McAleer said the hardest thing for her to learn was endurance, and keeping herself motivated.

“My derby family was there for me. They teach you how to do everything you don’t know,” she said. “You’re never struggling by yourself.”

And if being on the team is a little intimidating to start with, Glover said there are plenty of non-skating positions for leagues and teams.

“Derby girls in general have a lot of trouble with these preconceived notions that this is some theatrical notion of, we’re all out there in tutus and trying to clothesline each other,” McAleer said. “There are a lot of people who think we get out there to be silly and not mean it. But it’s athletic, and there’s no doubt about it.”

Roller Derby 101: Your quick guide to not looking like a novice

Blocker: The women who block the opposing team’s scorer, trying to prevent her from passing them

Bout: The name for a roller derby match-up

Cutting the track: One of the top penalties for jammers. When she gets knocked out of bounds, a jammer is supposed to come back on the track behind the people who blocked her out.

Jammer: The person who scores points. Wears a star on her helmet.

Lead jammer: The jammer who first pushes past the opposing team’s blockers. She can decide whether or not a jam will last the full two minutes allotted.

Panties: Helmet covers for the jammer and pivot, which feature a star.

Pivot: The second-in-command jammer, who takes over if the original player can’t get through the blockers.

How the sport works: Jammers have two-minute periods inside two 30-minute halves, in which they must pass the opposing team’s blockers as many times as possible. Each blocker passed is a point scored. The first jammer to pass the opposing blockers can decide whether a jam will last the full two minutes or if she wants to call it off early, a strategy employed by many teams.