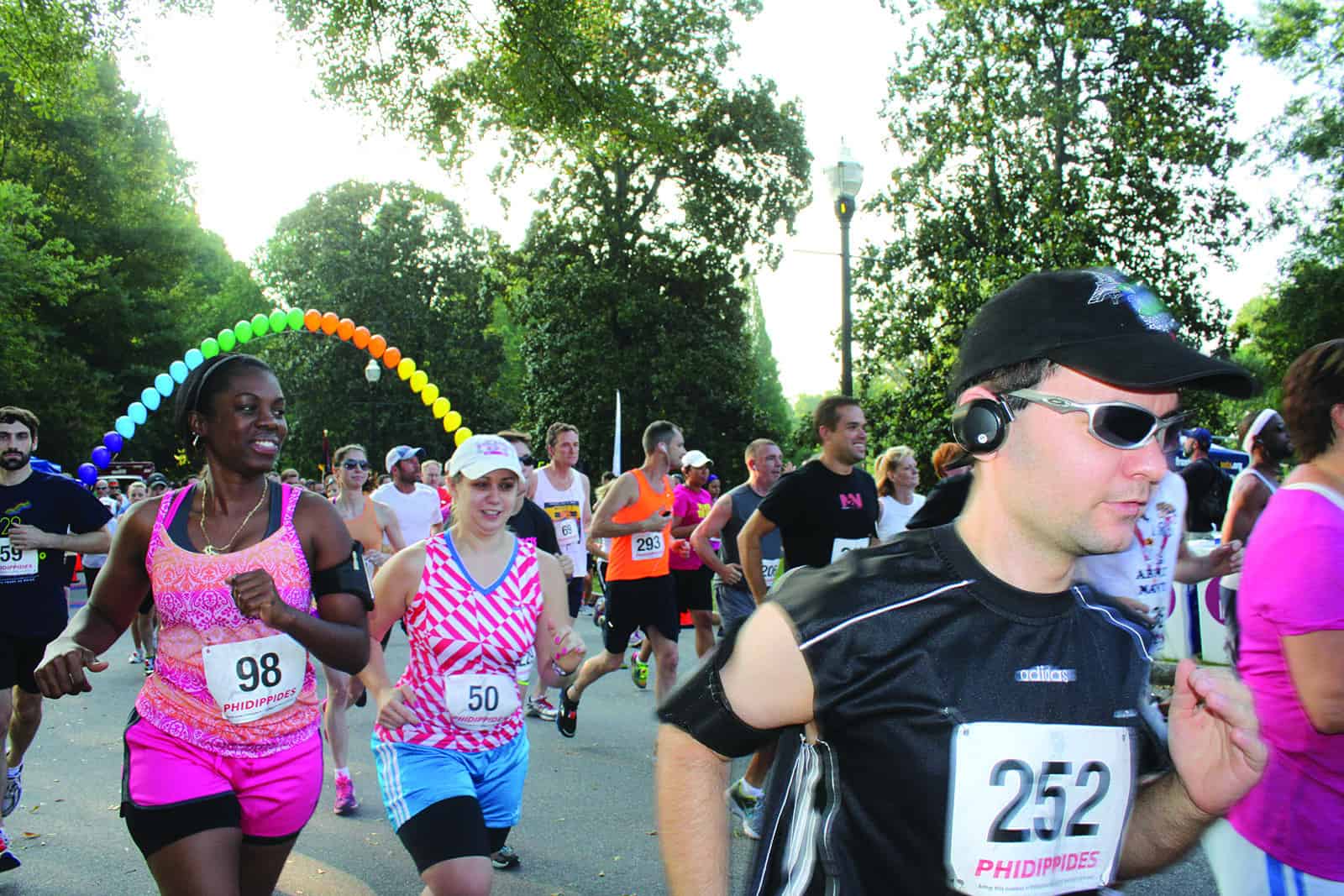 You now officially have no excuse to be bored this spring. You have been warned.

Atlanta is packed with sports for every gender identity, sexual orientation, body type and skill level out there in the LGBT community. Want to take a dip? Check. Hit the trails? Check. Join the scrum? Check. Throw the pigskin, charge the net, spike the ball, steal a base? Check, check, check and check. And you meet fresh faces while you’re at it.

Here’s a rundown of all that awaits you in LGBT sports leagues this spring, so go forth and be active.

Packs of gay runners have been pounding the pavement and trails of Atlanta since the early 90’s, thanks to Front Runners Atlanta. The “running, walking and social club for gay people and friends” as they call themselves meets Monday and Wednesday evenings and Saturday mornings to navigate various routes throughout the city. You’ll usually find them in various restaurants around town for post-run meals too. The group is all men this year, but Front Runners President Bernie Colligan tells GA Voice they’re open to everyone, male and female, and all levels of physical activity.

The boys of the NFFLA are chasing each other around their new home park this year, Boulevard Crossing Park. The 7-on-7 league has nine teams this year, most of which are sponsored by gay-friendly businesses around town. NFFLA chairman Jonathan Frank boasts of a 70 percent return ratio from last year, which he says is due to the camaraderie the players experience on and off the field. “They’re hanging out after games, they’re hanging out on the weekends and a lot of friendships are formed,” he says. All ages, sizes, experience levels, gender identities and sexual orientations are welcome.

Atlanta Bucks
And here we have the big bruisers in purple. If you don’t think “gay” and “rugby” belong in the same sentence, you obviously haven’t seen these guys play. If you’re new to the sport, the club recommends attending a practice to see what it’s all about. They meet every Tuesday and Thursday night from 7 to 9 p.m. at Toomer Elementary School. There are also “Rugby 101” sessions twice a year where you can learn the basics and test your skill level. As far as how in shape or coordinated you have to be, the club simply says “having some athletic ability is a good thing.”

Registration: $100 for a single season, $180 for a full year
Event to watch out for:
Purple Dress Run 2014
Benefiting the Bucks and Lost-N-Found
Saturday, May 10 at 1 p.m. starting at Mixx
www.atlantabucksrugby.org

ATTA was founded in 1987, so this groups knows what it is doing when bringing a quality tennis experience to the LGBT community. Members have access to lots of different options, including open play doubles and singles and doubles ladders, as well as various social activities throughout the year. All skill levels are welcome, and all gender identities—the makeup is about 80 percent men to 20 percent women this year. Fun fact: a couple that met through ATTA got married in New York recently, so you never know…

Yes, there’s even gay volleyball! That’s right, you can bump, set and spike with a couple hundred of your fellow LGBTs (and allies). Spring league play has already begun, but the league has four sessions of open play each week for you to check out. While the league is about 90 percent men at this point, Commissioner Quentin Walker encourages more women to come out and participate, and all skill levels are welcome. Walker says the volleyball is second to the social aspect, telling GA Voice, “It’s a way for us to get together and build community and be a place of camaraderie and support.”

Registration: $25 per year.
Event to watch out for: Four sessions of open play each week, with info TBA on summer beer busts throughout Midtown
www.hotlantavolleyball.org

Hotlanta Softball is well into their third decade of offering fun spring days on the diamond and have become the second largest LGBT softball league in the country. The spring season has already kicked off but you can still come out to catch games and see what all the fuss is about at the West Metro Atlanta Softball Complex every Sunday through June. The league is co-ed, and while in the past it was the women who filled the majority of the rosters, it’s been the men who have filled out the biggest chunk of the league in recent years. However League Commissioner Kyle Miller tells GA Voice that this year saw a surge in female signups.

The perennial “best named LGBT Atlanta sports league” just keeps on stroking into year 19. There’s swimming, water polo, diving and even a triathalon for men and women up for a dip at the world class Georgia Tech Aquatic Center. And you don’t need a swimmer’s build to hack it with the Trout. All shapes, sizes and skill levels are welcome (as long as you can swim freestyle for 50 yards), and if the Fear of the Speedo has you hesitant, fear not—you can wear any kind of suit that makes you comfortable.

Registration:new members $105 per quarter. Renewal is $85 per quarter.
Event to watch for: Practice on Sundays, Tuesdays, Wednesdays and Fridays
www.atlantarainbowtrout.com/

The Decatur Women’s Sports League isn’t all gay—just 99 percent, per league founder and commissioner Anne Barr. All women of any age or skill level are welcome. “We just got a new team of nice ladies from Clayton County that are all 55 and older called the Silver Foxes. They’re doing really well,” Barr tells GA Voice. They offer a variety of sports including badminton, basketball, bowling and volleyball, but the offerings available for this season specifically include soccer, softball and tennis. They’re a charitable group as well, having given out around $70,000 to local organizations since opening eight years ago. And they even have a new softball team called the Bluebirds in honor of the late Ria Pell.

Registration: Check the website for the fees for each individual sport
Event to watch for:
Charity Poker Night for the Fallen Soldiers
Friday, March 28 at 7 p.m.
Phillip Rush Center
www.decaturwomensports.com