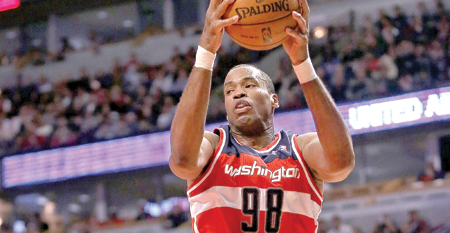 Angel McCoughtry, star player for the WNBA’s Atlanta Dream, sat at a table with reporters in the belly of Phillips Arena during the basketball team’s recent media day.

Reporters asked her about playing overseas, about how the former Louisville star felt about her college being represented in the NCAA championships (the men won the title and the women lost the championship game to University of Connecticut) and her predictions for the upcoming Dream season.

When asked if she knew any gay players, she laughed knowingly.

And then she said she doesn’t care if a player is gay or straight.

WNBA No. 1 draft pick Brittney Griner came out in April, shortly after being drafted by the Phoenix Mercury. McCoughtry said she thought it was a good move for Griner if she felt she needed to do it.

McCoughtry added that NBA player Jason Collins’ coming out two weeks after Griner and the accolades he received from his first-person piece in Sports Illustrated seemed a bit unfair compared to women who have come out in many sports before him.

“I never hear about men coming out. Since that one guy did, Collins, he’s been getting all the press. But when Sheryl Swoopes came out she kind of like lost her endorsements. Who was Collins before he came out?” she asked. “And why was [Swoopes] left in dust? And you can quote me on that.”

Griner’s coming out to help WNBA?

Griner, 22, who played for Baylor University, came out in a nonchalant way on April 17 in an interview with SI.com alongside the No. 2 and No. 3 WNBA draft picks, Elena Delle Donne and Skylar Diggins.

SI Video host Maggie Gray brought up the issue by stating that “another big topic in sports recently is sexuality, especially with the NFL.

“In football it was rumored that maybe one or more players were going to come out — that would become huge news in the sports world and in general,” Gray said. “In female sports, women’s sports, in the WNBA, players have already come out, and it’s really accepted. Why is there a difference between men and women in that issue?”

Responded Griner, “I really couldn’t give an answer on why that’s so different. Being one that’s out, it’s just being who you are. Again, like I said, just be who you are. Don’t worry about what other people are going to say, because they’re always going to say something, but, if you’re just true to yourself, let that shine through. Don’t hide who you really are. …

“It really wasn’t too difficult, I wouldn’t say I was hiding or anything like that. I’ve always been open about who I am and my sexuality. So, it wasn’t hard at all. If I can show that I’m out and I’m fine and everything’s OK, then hopefully the younger generation will definitely feel the same way,” Griner added.

Griner then revealed this month in an interview with ESPN The Magazine and espnW that she was told not to come out publicly at Baylor by her coach because the staff believed it would hurt recruiting efforts if parents saw a team at the Christian college readily accepting a lesbian player.

While there are and have been gay players on the Atlanta Dream according to reliable sources, so far no one on the team has come out publicly.

The Dream franchise was founded in Atlanta in 2008 and continually cites low attendance among the other 11 teams in the league — despite being a two-time Eastern Conference Champion and making it to the playoffs in the past four seasons.

Head Coach Fred Williams said in an interview that the Dream likes to keep it “first class and clean” when asked when a player on his team might come out.

Williams said he did not know of any gay players on the Dream.

“I don’t get into their personal lives, what they do and all that. I know when it comes to basketball and between the lines with our team and organization, we like to keep it first class and clean,” he said.

“And no matter what their lifestyle is, we support them because they are people. They got their own mind, they are their own human beings, and that’s how it is,” he added.

Williams did praise Collins for coming out, saying if he knew the player’s phone number he would call him (like President Barack Obama did).

“I would call him and say I commend you for what [he] did because he’s still got to walk tall and be around other people in public,” Williams said.

“I know a lot of ladies have come out and said a few things in our league. I never judge that. I really support what they believe in if that’s their belief,” he added.

Williams said he doesn’t think any differently about Griner since she came out. He knows his team will face a tough opponent when they play the Phoenix Mercury on the road Aug. 3 and at home on Sept. 8.

“I think its good” Griner came out, he said. “Everybody is asked so many things, what you believe, what you stand for, and in society now, especially with the internet, people want to know. So why not? Quit speculating and just come out, just say it.

“I don’t look at Griner any different than I did yesterday. I think she’s going to be a wonderful piece of the puzzle for the success to this league.”

The 6’8” Griner was one of college basketball’s biggest stars and her entrance into the WNBA resulted in a 19 percent increase in WNBA merchandise sales, according to azcentral.com. And the Dream is promoting her appearance at Phillips Arena as well.

‘It comes down to two penises’

Cyd Ziegler, co-founder of Outsports.com and a regular commentator on sexuality and sports, said there is a difference between Griner coming out in the WNBA and Collins coming out in the NBA, one of the men’s major professional sports that was still waiting for someone to shatter that glass ceiling.

“Jason was a surprise,” Ziegler said. “I knew Brittney was a lesbian. It was an open secret. A lot of people knew. But my reaction with Jason was that this was something we had been waiting for for a long time. It took way too long, but it was great someone had finally taken the step.”

The outing of professional tennis player Billie Jean King by an ex-lover in 1981 made it easier for women to come out, Ziegler said.

“She had no choice. It didn’t make it easy for women to come out, but it made it easier,” he said.

For men, the difficulty in Americans accepting an openly gay major sports figure is, well, the penis, Ziegler said.

“People are afraid of penises going where they think they’re not supposed to go,” he said. “It’s a weird part of our culture. And that’s what it comes down to — two penises. People aren’t as freaked out by women. We can see women full frontal in movies. But with two men, it’s doing something with the penis most people don’t do and people are weird about it — and this just translates into sports.”

If a woman plays sports, she is often perceived to be gay. And nothing could be further from the truth, said Helen Carroll, director of the Sports Project of the National Center for Lesbian Rights.

“What women have to do — they have to come back at that stereotype,” she said.

Some straight women fight this stereotype and try to prove their heterosexuality by dressing in very feminine clothing or even marrying men they don’t want to, she said.

Lesbian athletes, meanwhile, have to learn that it’s OK to be gay but still acknowledge that stereotype shouldn’t be there.

Carroll said she was thrilled with the coming out of Collins as well as Griner.

“Certainly the world and LGBT sports activists are happy to see a professional male top athlete recognized in the sports world come out. It was time,” she said. “Now he can be out and happy who he is. And he will be a wonderful spokesperson.”

Carroll said it should be noted also that Griner and Collins are black.

“Both of these athletes are role models for every kid. Boy, girls, persons of color. They both have strong personalities. They’re different and that will help kids identify with them,” she said. “Both are people of color which is very important for discussion of race that continues to happen.”

Women athletes do not have it easier when coming out simply because they are women, Carroll stressed.

“Women players have to deal with sexism, especially in the media, and homophobia so it is very difficult — that question of is it easier for women to come out always irritates me as the answer is no, it is not easier, It is different. Each gender has to deal with specific issues,” she said.

Rosie Jones, the legendary LPGA player, was vacationing on the beach, watching her dog play in the sand, when she opened up about coming out as gay in a phone interview.

“You know, when Jason Collins came out I thought it was awesome,” Jones said, adding she tweeted him congratulations. “It takes a lot of courage to come out. And it’s not that much difference for a guy than a girl to come out. It’s who you are protecting  — your family, your team, your sport. But I think the backlash is harder for the guys.”

Jones, who lives in Sandy Springs and owns Rosie Jones Golf Getaways, came out publicly in 2004 as part of an endorsement deal with Olivia, a travel company targeting lesbians.

During her career, she won 13 LPGA Tour victories and an estimated $8.4 million in earnings. She couldn’t come out during this time because she feared the loss of endorsements and the LPGA had been “brushing [sexuality] under the rug for a long time,” she said.

One commentator even said lesbians were hurting the sport, Jones recalled.

When the issue of sexuality came up, the LPGA encouraged golfers to change the subject, Jones said.

“And so we did. But it eventually got to the point where the issue was always coming up and nobody was taking it on by the horns. The time was right when Olivia asked me to represent them. I was ready, personally and professionally, and the world was ready,” she said.

Of course, Jones said she was still scared to come out publicly; she feared responses from friends, fellow golfers, the public.

“The first day after I came out I felt like I was going to work naked,” she said.

She became busy with interviews as well as fans thanking her for finally coming out. She even got some more endorsements. And she was still expected to perform well. Coming out actually put more pressure on her game, she said.

“I wanted to prove I was still a great golfer and that I wasn’t doing this for attention,” she said.

Jones remains in the memory of many golf fans as one of the greats. She still likes to hit the courses around metro Atlanta and says she talks to people 60 and 70 years old and introduces them to her partner.

“I applaud Brittney and Jason,” she said.

“Times have changed, people have changed, and people like Martina Navratilova made it easier for people like me. I totally believe the world will only get better as more athletes come out. For me, it was like freedom had come into my life.”

Top photo: Jason Collins, a free agent in the NBA, is the first current player to come out in one of the major male team sports. Advocates say his coming out is a milestone for LGBT athletes. (Photo by NBA)