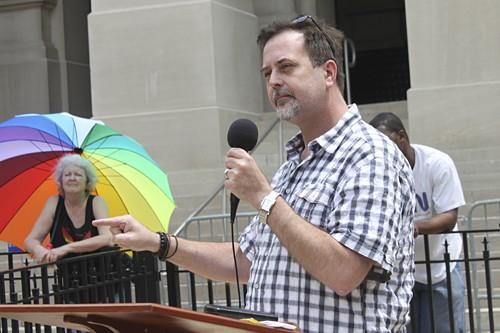 Broderick Smylie, 36, has lived in Atlanta for 11 years, living throughtout the metro area from Norcross to Conyers to Decatur to Midtown. He's always enjoyed food and has a special fondness for Asian and Mexican restaurants on Buford Highway and in Duluth ― and, he says, don't knock OTP dining until you've tried it.

Born in Cleveland, Ohio, Smylie moved to Atlanta to escape the snow and cold winters.

“It gets colder here than I first envisioned,” he says.

Smylie said he began writing his own food blog, Savory Exposure,  several years ago after following other food blogs he admired ― Tami Hardeman's “Running with Tweezers,” Hardy Wallace of “Dirty South Wine” and Matt from the former blog “Rowdy Food.”

DJs, pimps and hoes, oh my!

Atlanta's gay bars and nightclubs threw down in a big way on New Year’s Eve. Our photographers were on-hand at several LGBT watering holes and snapped shots of party-goers into the early hours of the New Year.

Check out our galleries below.