The case of a 40-year old man who was denied employment with the Atlanta Police Department over his positive HIV status will return to a U.S. District Court after the U.S. Court of Appeals for the Eleventh Circuit sent the case back to the lower court to resolve unaddressed issues.

The man, identified as by the pseudonym “Richard Roe,” first applied to the APD in early 2006, but was denied employment due to his HIV status. Roe claims the department called him a “direct threat” to the safety of others.

Roe was represented by attorneys with Lambda Legal, a nonprofit group that works on LGBT and HIV issues. Lambda argued the case before the appeals panel on Jan. 25 in Atlanta.

"This is a great victory for Lambda Legal's client who will now get his chance in court to show how the APD's refusal to hire him was discriminatory and illegal," Scott Schoettes, Lambda Legal's HIV project director, said in a press release this afternoon.

"Before the appellate court, the City of Atlanta admitted that there are already HIV-positive police officers serving on the force; now they need to explain why our client should be treated any differently," Schoettes said.

In an unpublished opinion released today, the three-judge appeals court panel found that the district court erred in siding with the city that Roe had not established he is qualified to be a police officer. “Unpublished” means the opinion is not binding precedent, according to the appeals court web site.

A new day in court

Vance Johnson and Derrick Leggrant face charges of simple battery and felony obstruction after fighting Jan. 21 with an off-duty police officer at the gay bar Blake's on the Park, according to police reports released this evening.

Both men were under the influence of alcohol at the time of the altercation, which apparently stemmed from them trying to cut the bathroom line, police reports state.

Police leaders said yesterday that they want to investigate any allegations of police misconduct stemming from the incident. But they noted that the only criticism thus far has come from one individual who wanted to remain anonymous and had not filed an official complaint.

Meanwhile, multiple Blake's employees and patrons praised police handling of the unruly patrons who are described as "belligerent" in witness statements included with the police reports.

A fight at popular Midtown gay bar Blake's on the Park Friday night resulted in two arrests after an off-duty police officer was assaulted by a patron, according to police.

Sometime Friday evening (or possibly early morning hours on Saturday), two males were asked by the manager to leave the establishment (Blake's). They refused. The manager called for the off-duty officer working at Blake's, who advised one of the individuals they would have to leave. One of the males refused and threw his drink in the officer's face and then punched him in the face.

"At some point, a call for assistance went out over the radio and several Zone 5 officers and a supervisor arrived on scene. One of the individuals damaged a third person's vehicle in the parking lot and was charged with Criminal Damage to Property. The first individual that punched the off-duty officer was charged initially with Felony Obstruction. Our LGBT Liaison officers have been notified of the incident. 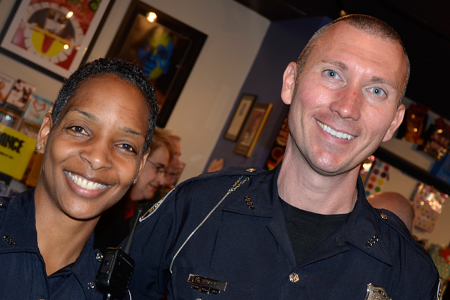 Tis the season for giving and the Atlanta Police Department's LGBT employee alliance group is getting in the spirit by collecting toys for one of the gayest events of the the year — the annual Toy Party.

APD's LGBT liaisons Patricia Powell and Brian Sharp along with other gay employees, as well as straight allies, will be at Brushstrokes in Midtown at 1510 Piedmont Ave. on Nov. 27 and then at the Toys "R" Us at 1 Buckhead Loop Drive in Buckhead on Dec. 4, from 10 a.m.-2 p.m. at both locations. The Atlanta Police LGBT employee alliance group was formed this year shortly before Atlanta Pride.

They will be collecting unwrapped toys or gift cards worth $25 or more that will then be delivered to the AmericasMart on Dec. 4 for the 9th annual Toy Party and silent auction. 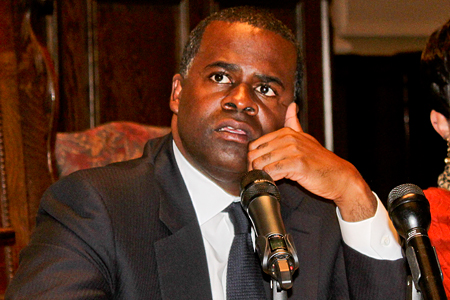 Reed was on hand to discuss the 2009 raid on the Atlanta Eagle, a gay bar, alongside the Atlanta Police Department's LGBT Advisory Board and APD head Chief George Turner. But several of the open floor questions centered on the mayor's decision to revoke an executive order allowing Occupy Atlanta protesters to remain in the city's Woodruff Park beyond an 11 p.m. deadline and the subsequent arrests of the protesters who refused to comply in the early morning hours of Oct. 26. 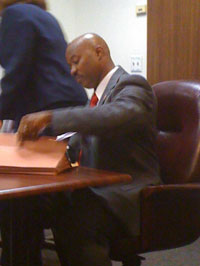 Atlanta Police Department Sgt. Kelly Collier withdrew his appeal of his 20-day suspension received for his role in the unconstitutional 2009 raid on the Eagle, a gay bar.

Collier, who was with the APD Vice Unit at the time, appeared before the city's Civil Service Board today in an attempt to appeal his suspension and get back pay. But about an hour into the hearing, including a recess with his attorney and the city attorney, he agreed to withdraw the appeal. He now works with the police department’s Weed & Seed program.

Collier's attorney told the three-member Civil Service Board that Collier agreed to withdraw his appeal after she and Atlanta City Senior Assistant Attorney Amber Robinson had a private conversation outside the hearing during the recess. No specific reason was given why the appeal was withdrawn.

Asked why he withdrew his appeal, Collier would only say, "Just tired. Just tired." 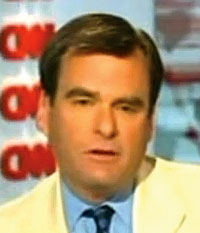 A 39-year-old man is suing the city of Atlanta after he claims he was denied a job as an Atlanta Police Department officer in 2006 because he is HIV-positive.

Last week, Lambda Legal finished its briefing with the Eleventh Circuit Court of Appeals on behalf of “Richard Roe,” the pseudonym being used by the HIV-positive man in legal documents to protect his privacy.

The lawsuit was originally filed in 2006. A lower court ruled in favor of the city because Roe “could not show he was qualified to perform the job because it believed that a police officer with HIV presents a ‘direct threat’ to the health and safety of others,” according to Lambda Legal.

Religion blog: ‘To Serve and Protect’

Generally, in major league baseball when a prolonged slump gets too long, the President of the ball club fires the manager. In the case of Atlanta, the manager is the Chief of the Atlanta Police Department George Turner and the President is Mayor Kasim Reed.

Mayor Reed appointed Turner to his position after being less than honest during his campaign for mayor by saying he was going to do a national search and get the best person for the job in the country. 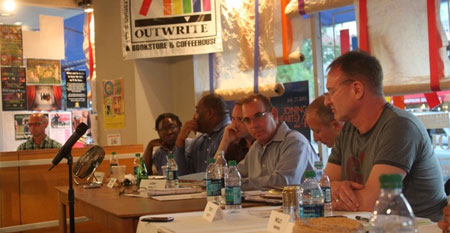 A heated meeting of the Atlanta Police LGBT Advisory Board on Monday night included shouting, accusations of the board being “puppets” of the mayor and palpable anger with the board and city administration for not doing more to heal the pain in the community after the unconstitutional raid on the Atlanta Eagle nearly two years ago.

Geoff Calhoun (pictured, inset), was in the gay Midtown bar the night it was raided on Sept. 10, 2009, and was a plaintiff in the successful federal civil lawsuit against the city. Calhoun got into a shouting match with board member Ebonee Bradford-Barnes at the two-hour meeting held at Outwrite Bookstore & Coffeehouse after he accused the board of becoming “puppets” of the mayor. Calhoun's statements came after much discussion about why the media was not allowed into the meetings the board had with Mayor Kasim Reed and Police Chief George Turner last month.

“I wonder if you could explain the rationale of the majority of the board denying the media into the meeting with the mayor. I'm trying to understand … is it because you thought you wouldn't be honest, the mayor wouldn't be honest?” Calhoun said.