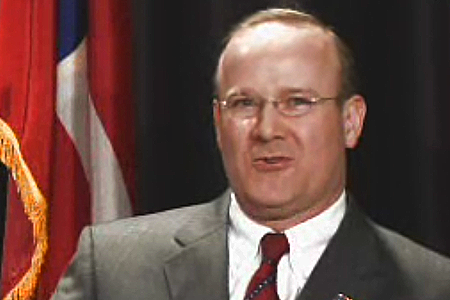 Georgia Rep. Bobby Franklin (R-Marietta), a Cobb County lawmaker who once compared gays and lesbians to drug dealers, has died, according to the Atlanta Journal-Constitution's Jim Galloway. The cause of death was not immediately known.

Franklin made national headlines earlier this year after making several anti-gay comments in an interview with the Marietta Daily Journal while discussing “Don't Ask, Don't Tell.” 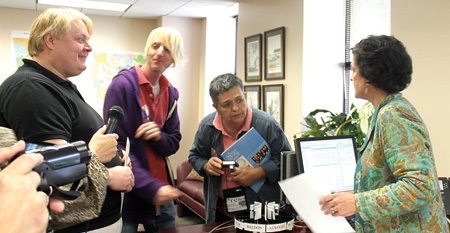 State Rep. Bobby Franklin (R-Marietta) said this week he “can not and will not” apologize for comparing gay people to criminals after LGBT activists hand delivered a letter demanding an apology to his office on March 8.

“The Bible says [homosexuality is] a capital offense,” Franklin said in a Feb. 7 article. “You want someone with unrepentant criminal behavior? And it’s not just that, neither should adulterers, neither should thieves, neither should a lot of things. The church is full of sinners, but we’re told in 1st Corinthians it rattled off the homosexual, the adulterer, the thief, the liar, and such were some of you, but you’ve been washed, you’ve been justified and so forth. It’s not what you were. You’re not punishing a thought. But do you want an unrepentant drug dealer in the military? Same thing.” 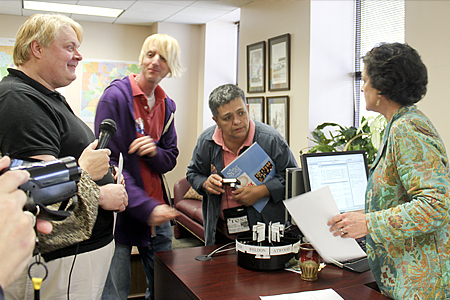 LGBT activists hoping to confront state Rep. Bobby Franklin (R-Marietta) today at the Capitol to deliver a letter demanding an apology for his recent anti-gay remarks were disappointed when the lawmaker did not meet with them.

In a recent interview with the Marietta Daily Journal, Franklin compared gay people to "unrepentant drug dealers" and said that according to the Bible, homosexuality is "a capital offense."

Members of the Queer Justice League who attended a community forum and meeting at My Sisters Room said they are planning a direct action on March 8. A group plans to deliver a letter to state Rep. Bobby Franklin (R-Marietta) at the Capitol asking for his apology for remarks he has made publicly against gay people, as well as against women's reproductive rights and against other marginalized communities.

Franklin has compared gays and lesbians to unrepentant drug dealers. He also called for a bill that would investigate miscarriages as possible murders or abuse against "fetal citizens, and wants to reclassify those who say they have experienced rape or abuse as "accusers" rather than "victims."

QJL and GetEqual GA are working to collaborate with PFLAG Marietta, whose members are constituents of Franklin, to deliver a letter demanding an apology while the legislature is in session, said Art Izzard of QJL.

After receiving national attention for his anti-gay comments made during an interview with the Marietta Daily Journal, Ga. Rep. Bobby Franklin (R-43) has declined to issue an apology, according to the MDJ.

Franklin, in the interview, compared gays and lesbians to unrepentant drug dealers while discussing his opposition to the repeal of the military's “Don't Ask, Don't Tell” policy.

Religion blog: We must come together now more than ever to obtain full equality

We know the LGBTQIA community has made a great deal of progress over the past 40-plus years. This progress has come about because for the most part the community as a whole has stepped far out of the closet into the every day world.

There is no place one can go and not find well-adjusted and successful folk. Hell, we have even made it into commercials to sell almost every conceivable product and are main characters in the TV and movie world.

“Don’t ask, don’t tell” is about to become a thing of the past. Every time one looks up there is another state granting either marriage or at minimum “civil unions.”

During an interview with the Marietta Daily Journal, Franklin compared gays to drug dealers while discussing his opposition to DADT’s repeal:

"The Bible says it's a capital offense," Franklin said. "You want someone with unrepentant criminal behavior? And it's not just that, neither should adulterers, neither should thieves, neither should a lot of things. The church is full of sinners, but we're told in 1st Corinthians it rattled off the homosexual, the adulterer, the thief, the liar, and such were some of you, but you've been washed, you've been justified and so forth. It's not what you were. You're not punishing a thought. But do you want an unrepentant drug dealer in the military? Same thing."

The Marietta Daily Journal interviewed outspoken (and some would say bat-shit crazy) State Rep. Bobby Franklin (R-Marietta), who makes no secret of his distaste for his gay constituents.

In the current session, Franklin has brought forth legislation that would do away with drivers’ licenses, HB 7, and a bill requiring the state make financial transactions in gold or silver coinage, HB 3 … yeah, seriously.

Even in the age of political correctness, Franklin bucks the trend by periodically offering (or supporting) anti-gay legislation in the General Assembly. Luckily, his attempts to redefine Georgia's obscenity laws to outlaw gay pornography have been miserable failures under the Gold Dome.