Christina and Alicia are major fans of hockey with Christina supporting the Ottawa Senators and Alicia loving on the Toronto Maple Leafs. But true love is stronger than any sports team rivalry.

At a March 18 hockey match in Canada, Felicia was led to the ice in a blindfold and then Christina followed her, met her at center rink, whispered into her ear, they hugged and kissed — to the roaring approval of the fans. And hockey fans are not known for their appreciation of nice, you know.

Christina dropped to her knees and asked Felicia to marry her. The Senators mascot danced around them holding a sign that read "SHE SAID YES."

Same-sex marriage has been legal in Canada since 2004. 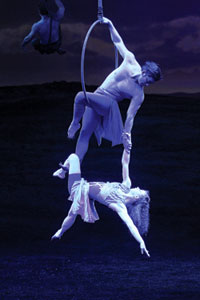 One of Atlanta’s most-attended productions of 2009 was “Cavalia,” which combined Cirque du Soleil-like acrobatics with equestrian elements. The follow-up, “Odysseo,” is making its U.S. debut here, with two of the acrobats in the new show openly gay: Samuel Alvarez and Brennan Figari.

Alvarez and Figari are two of the 54 performers — acrobats, aerialists, dancers, musicians and riders — headlining the troupe. Both are acrobats. Alvarez, a gymnast from Texas, has been working professionally for more than 12 years, stating off with Cirque du Soleil’s “Quidam” before moving to “Cavalia.”

Figari, a San Francisco native, had been doing acts such as the flying trapeze at his local resort and performing recreationally until he got serious about doing it for a living nine years ago. 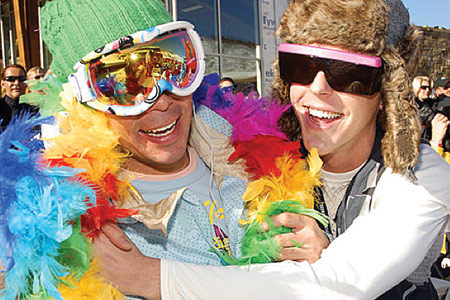 Try heading to the snow-covered mountains between now and April if you want to let your inner rugged self come out. The ski season is when Western, Northern and Canadian mountain towns really come to life. All of the best snow towns have learned that the LGBT community loves to ski and party, and annual Ski Weeks have blossomed everywhere from major ski resorts to nearby North Carolina.

Even non-skiers or snow boarders go to these annual white parties and join in the fun. If you want to keep your rugged self on flat ground there are plenty of dances, costume parties, entertainers, and people watching at these ski weeks to get your adrenaline flowing.