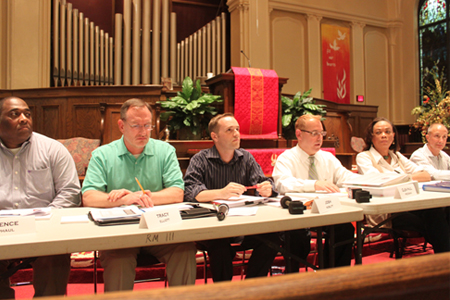 Frustration and anger with the mayor and police chief were expressed by several citizens at the Atlanta Police LGBT advisory group's community meeting on Wednesday as they discussed the 2009 Atlanta Eagle raid and the seemingly unending fallout from it.

About 30 people, including several police officers and representatives of Mayor Kasim Reed's staff, attended the meeting held at St. Mark United Methodist Church in Midtown. No formal action was taken by the police LGBT advisory board other than to state they are requesting separate meetings with Mayor Kasim Reed and Chief George Turner, to be held within the next two weeks.

The citizen board also plans to send a letter to each seeking answers to questions including why more officers were not fired after scathing investigations showed officers did not follow procedures when they raided the gay bar on Sept. 10, 2009.

All the people — citizens and LGBT advisory group members — who spoke at the community meeting expressed dismay that the city has taken nearly two years to take any action against the officers who lied, destroyed evidence, and violated the civil rights of the roughly 62 patrons in the bar the night it was raided.

Six Atlanta Police Department officers have been dismissed for lack of "truthfulness" and nine others were disciplined for their roles in the 2009 raid on the Atlanta Eagle, a police spokesperson announced Friday night. Three other officers face hearings next week.

Supervisor of botched Eagle raid not demoted before retirement

The Georgia Voice Editors
AtlantaNews
July 8, 2011 0
Atlanta Police Major Debra Williams, who was the supervisor of the Red Dog Unit and the Vice Unit the night...