Three out of four openly gay incumbents in the Georgia General Assembly proved victorious in the July 31 primary, while gay challengers in contested races were less successful. A lesbian attorney also won a seat on the Fulton County State Court in the July 31 vote.

Rep. Simone Bell, the first openly lesbian African-American state legislator in the nation, came out on top in the Democratic primary for State House District 58.

With 95.83 percent of precincts reporting, Bell had 58.84 percent of the vote, compared to 41.16 percent for Rep. Ralph Long, according to unofficial results from the Fulton County election office. 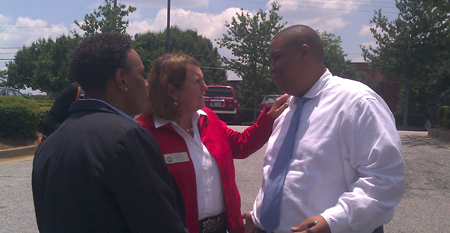 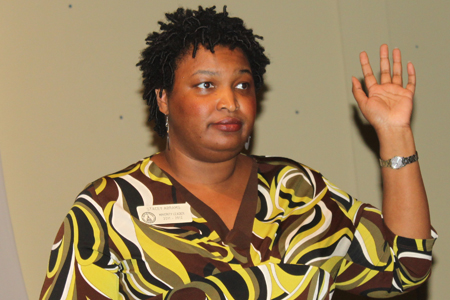 The state LGBT advocacy group has endorsed Bell and Drenner in their past elections. Britt, who is running in his first race, is a former board member of Georgia Equality. Jeff Graham, executive director of Georgia Equality, said today no endorsement of gay State Rep. Rashad Taylor has been made. He is facing strong LGBT ally and incumbent Pat Gardner for re-election.

The announcement of the early endorsements was made at an LGBT Caucus of the Democratic Party on Saturday held at the Democratic Party Headquarters. House Minority Leader Stacey Abrams attended the meeting to urge members and supporters to work hard this election season, especially before the July 31 primary, to ensure progressive candidates are elected.

Keisha Waites took the oath of office Feb. 13 to become the state representative for District 60. The ceremony took place at the Georgia State Capitol with Fulton County Superior Court Judge Doris Downs swearing her in.

Standing with Waites as she took the oath of office were her mother, Christine Harden, and her nephew, Elias Muhammad, 8, who held the Bible.

Waites, a Democrat, became emotional while being sworn in and after taking her oath thanked a host of friends, family and supporters who have backed her for more than a decade.

Gay-friendly Democrat and political newcomer Elena Parent knocked off incumbent Jill Chambers in a close battle for District 81 in the Georgia State House. The margin of difference was less than 300 votes.

With 99 percent of the precincts reporting this morning in District 81, Parent held on to victory with 3,315 votes, or 52 percent,  to Chambers' 3,039 votes, or 48 percent, according to unofficial results from the Georgia Secretary of State.

Parent gave a victory speech at the Georgia Tech Hotel and Conference center at about 11 p.m. Tuesday, although some news outlets at the time were calling the race too close to call. The results this morning show Parent held on for the victory.

The GA Voice takes an in-depth look at the midterm elections, from local to state and national-level races