For some, Marietta and Cobb County still carry the stigma of 1993, when the Cobb County Commission made international headlines with a resolution condemning the “gay lifestyle” as incompatible with community standards.

But much has changed in Cobb over the last 17 years. The gay bar LeBuzz continues to draw a steady crowd, and a gay man, Johnny Sinclair, serves on the Marietta City Council. 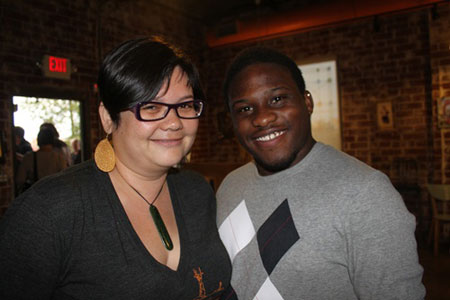 The event’s host, John Lemley, who also hosts WABE’s City Café weekdays from noon to 1 p.m., shared with the crowd that he had an exchange of emails prior to the event with Dave Hayward, a local gay historian. Hayward asked Lemley if he was going to come out as gay at the StoryCorps LGBTQ event. Well, Lemley said, if people didn’t already know he is gay, he asked, “Are we headless?”

The crowd responded with laughter and applause.

But it was the stories of local LGBTQ residents who recorded their stories with the Atlanta StoryCorps project that were the true highlights of the evening.

What do  ‘filth elder’ John Waters, playwright Shay Youngblood and out Christian singer Jennifer Knapp have in common?

If you tell the comedians who take the stage this evening that Atlanta’s official Pride festival isn’t until October, they’ll probably laugh at you. 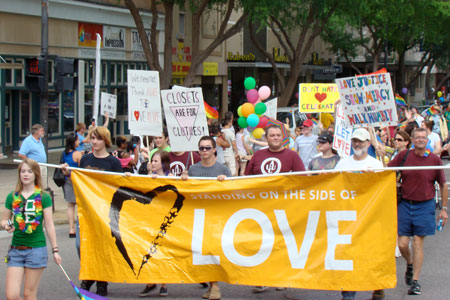 Grammy winner Thelma Houston closed out the stage for Augusta Pride this evening, but there was one more inspiring moment awaiting the hundreds who withstood the withering heat to be there for the festival's finale.

Community Brunch is important to Pride

I’m not missing a minute of this, it’s the revolution. That’s what Sylvia Rivera said of the Stonewall Riots. And she was right. Not just about the beginning of the revolution but about a lot of things.

The Atlanta Pride Festival, by far the largest Pride festival in Georgia, may not take place until October, but there are plenty of other events around the state to mark June, which President Obama officially declared as LGBT Pride Month.

“As Americans, it is our birthright that all people are created equal and deserve the same rights, privileges, and opportunities.  Since our earliest days of independence, our Nation has striven to fulfill that promise.  An important chapter in our great, unfinished story is the movement for fairness and equality on behalf of the lesbian, gay, bisexual, and transgender (LGBT) community,” the president’s proclamation reads.