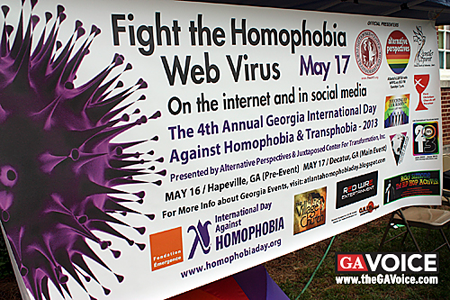 While it may have only been “Mistreatment Awareness Day” to Gov. Nathan Deal, a crowd turned out May 17 for Georgia’s observance of the International Day Against Homophobia & Transphobia.

State Rep. Keisha Waites (D-Atlanta) presented a resolution honoring the International Day Against Homophobia signed by Georgia’s three openly lesbian state lawmakers — Waites and Reps. Karla Drenner (D-Avondale Estates) and Simone Bell (D-Atlanta). The event also received official recognition from the City of Decatur, signed by Mayor Jim Baskett, which was presented by Drenner, according to IDAHO organizer Betty Couvertier. For the second year in a row, event organizers requested an official proclamation from the governor’s offi ce. And for the second year in a row, Deal’s offi ce sanitized the name to “Mistreatment Awareness Day” and removed all specific references to sexual orientation and gender identity.