The Georgia Voice Editors
Web Info
January 24, 2011 0
Use the links below to find information on many of Georgia’s LGBT organizations. To add your listing, please e-mail editor@thegavoice.com...

A Carroll County man believes he was the victim of a hate crime after his house was set on fire late Sunday, according to WSB-TV. Chris Staples told WSB that a rock, with an anti-gay note attached, was thrown through a window in his home and several hours later, he awoke to flames in his bedroom.

According to WSB, Staples said of the note:

Is direct action making a comeback in gay Georgia? 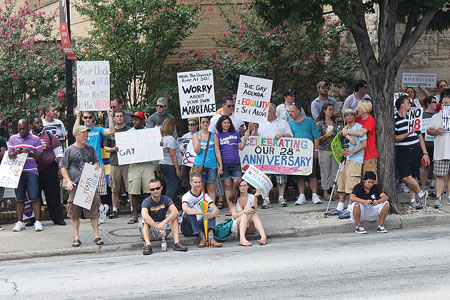 It was dubbed “Queerlicious Mouths Unite” and was intended to make a strong statement to Gov. Nathan Deal that gay, lesbian, bisexual and transgender people are here and queer, so get used to it.

“The intended message was that we wanted to seriously remind Deal and the general public of the queer community, our seat at the table and that we are Georgians, too,” said Jess Morgan, an organizer of the canceled event with the Queer Justice League, MondoHomo, Savannah’s Queer Power Movement and GetEQUAL.

Falcons in the playoffs!

Councilmember Wan: Hey, Midtown, move your cars off the street

Atlanta City Councilmember Alex Wan sent out an e-mail asking that residents move their cars off the streets so the city’s neighborhood roads could begin to be cleared of snow and ice.

Wan, who is gay, represents District 6, home to Midtown and many of the city’s gay residents and businesses.

“We are asking the citizens of Atlanta to IMMEDIATELY remove their vehicle from the city streets (both legally parked/abandoned vehicles) so efforts can be made to clean the snow/ice off the roadway. The equipment being used is heavy equipment; if vehicles are left on the roadway they may become damaged as these trucks are attempting to clean the roadway.”