The Georgia Voice Editors
AtlantaNewsSports
May 5, 2011 0

McDowell has publicly apologized for the outburst. 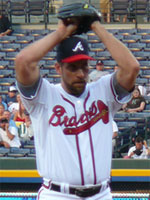 The news of Atlanta Braves pitching coach Roger McDowell being put on administrative leave over alleged anti-gay slurs hurled at San Francisco Giants fans last weekend is just one of several incidents the team has had to answer for with LGBT fans.

In 1999, former Braves relief pitcher John Rocker was quoted in a 1999 Sports Illustrated profile of him saying why he would never play in New York.