The Georgia Voice Editors
AtlantaNews
July 13, 2012 0
Brandon White testified at the sentencing hearing Thursday for the three young men who attacked him and said he is... 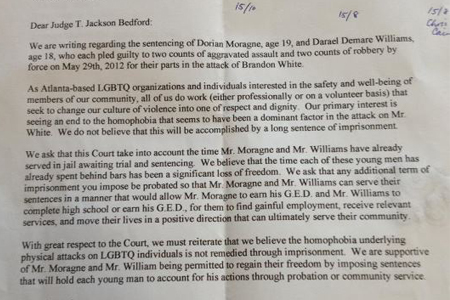 State Rep. Simone Bell says she signed onto a letter that was provided by several LGBT activists to Fulton Judge Jackson Bedford during Thursday's sentencing hearing seeking leniency for two of the defendants in the anti-gay assault on Brandon White because she wants the case moved to federal court and pave the way for a state hate crime law to be passed in Georgia.

In a press statement released late Thursday, Rep. Bell said she sees the Feb. 4 attack on Brandon White, 20, an openly gay man, "centered in hate due to his sexual orientation."

Charged in the beating are Dorian Moragne, 19, and Darael Demare Williams, 17. A group of LGBT activists are asking Fulton Superior Court Judge Jackson Bedford sentence them probation rather than a lengthy prison sentence.

Christopher Cain, 18, also charged in the attack, pleaded guilty Thursday to the same charges Moragne and Williams pleaded guilty to on May 29: being part of a gang, two counts of aggravated assault, and robbery by force.