Garner to be first out gay Fulton commissioner

The General Primary Runoff will determine the winner out of the top two finishers in contests where no candidate received the majority of votes in the July 10 primary election.

In addition to the contest between lesbian candidates Keisha Waites and Joan Garner in Fulton County, here are two of the top races of LGBT interest on the primary ballot.

While few candidates for the state’s top offices have openly campaigned for LGBT votes, many have long records — some positive, more negative — on issues that impact our community.

GOP runoff to determine who faces Barnes in governor’s race

Former Gov. Roy Barnes cruised to an easy victory in the July 20 Democratic gubernatorial primary, easily meeting the 50 percent plus one vote margin required to win without a runoff.

Barnes, who served one term before being beaten by Sonny Perdue, took 65.8 percent of the vote in a crowded field.

During his previous tenure, Barnes became the first sitting Georgia governor to address a gay rights group when he spoke to the Atlanta Executive Network in July 2000.

Barnes did not back specific gay-related legislation but expressed strong support for principles of non-discrimination, including sexual orientation. Barnes also signed Georgia’s first hate crimes law, although the measure was eventually struck down as “too vague.”

Nathan Deal released another commercial today citing Karen Handel’s alleged past support of gay issues. Deal, a former congressman, and Handel, former Secretary of State, face off Aug. 10 in the runoff to see who will be the Republican nominee for Georgia governor.

The commercial, a 30-second spot entitled “Straw,” hit YouTube this morning. Its release coincides with the announcement that former Alaska Gov. Sarah Palin will speak at a Handel campaign rally on Aug. 9 – one day before the runoff.

The two remaining Republican gubernatorial candidates met for a televised debate last night on Fox 5 Atlanta. Moderated by Russ Spencer, the debate covered a wide range of issues, including the anti-gay tone of the primary campaigns.

During the general primary, Deal released one of the most anti-gay commercials of the race that claimed Handel supported gay adoptions and domestic partner benefits. Handel spent a large portion of the early campaign denying her alleged support of gay issues as well as her involvement with gay GOP group Log Cabin Republicans.

In the days leading up to the July 20 primary, you couldn’t turn on the television without being inundated with ads from Republicans running for governor who wanted to tell you how anti-gay they are.

This year’s election season has been particularly bad, largely due to the particular Republicans on the ballot.

Karen Handel supported domestic partner benefits and was a member of the pro-gay Log Cabin Republicans during her campaigns for Fulton County Commission. But she denied those stands when she ran successfully for Secretary of State in 2006, and continues to deny her past support in her current bid for governor.

Speaking Out: Your comments on the primary election

Handel should focus on her own family, not gay families
Re: “Karen Handel: ‘I would consider’ banning gay adoption” (blog by Laura Douglas-Brown, www.thegavoice.com, July 14)

We’re clearly at the “say anything” point in the campaign. I hope people remember GED Jane and her quitting ways will not fix the serious and longterm problems this state has.

Our coverage of yesterday's state and local primary races

Former Gov. Roy Barnes cruised to an easy victory in today's Democratic gubernatorial primary, easily meeting the 50 percent plus one vote margin required to win without a runoff. 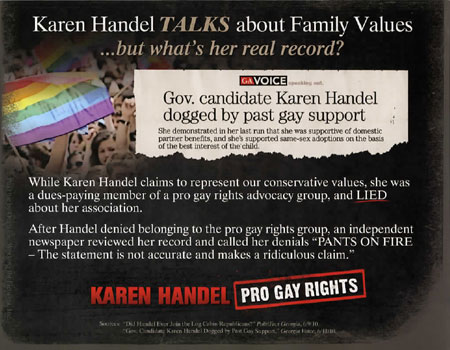 At least someone on Oxendine’s campaign staff does. Oxendine included us in a recent mailer attacking fellow Republican gubernatorial candidate Karen Handel for her past connections to the Georgia Log Cabin Republicans and support of gay issues. See the full mailer here.

We appreciate the shout-out, Ox! (Even if you did make up a fake page to display)